The issue at hand here is different – some of the comments about the decision have been downright derogatory and offensive. One particular comment by the famous writer Taslima Nasreen, where she calls children by surrogacy as “readymade babies” has come under huge fire from reproductive and women rights activists. 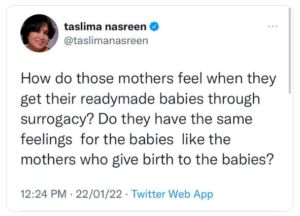 Priyanka however is not the first one to join the surrogacy bandwagon; she joins a long list of other Bollywood stars including Aamir Khan, Shah Rukh Khan, Karan Johar, Tusshar Kapoor, Ekta Kapoor, Shilpa Shetty, Preity Zinta, Sunny Leone, Shreyas Talpade and Lisa Ray among others who have opted to have babies using IVF and/or surrogacy.

Ever since Priyanka’s announcement on Instagram regarding the baby there were several congratulatory and supportive messages from celebrities and commoners alike. Many supported this by sharing their own experiences like @villegasgirl73 added a comment saying, “As a surrogate for my sister 14 years ago I am thrilled to see that more families are being created via this wonderful gift!”

But there was also a landslide of snide remarks and comments about the choice that bordered on being mean like “the stupidest thing I’ve ever heard. Buying their own baby.”

Several others questioned her commitment to women rights and said things like,”I was a fan of you both but surrogate is not feminist… Sorry but no.” Another user added,”What’s with this whole surrogate thing. This should only be for people who can’t have babies through natural processes and have medical issues and really love kids. Not to these celebrities who don’t want to go thru the process and pain but want to reap the fruits of it all delivered on a platter.”

They were highly critical of her choice to go for surrogacy if she didn’t have a valid medical reason for the same. Also many others seem to believe that a woman who “avoids” pregnancy and childbirth pain like this and “hires a womb” can never be a “mother enough.”

Speculations were also made about their marriage and its viability in the context of this alternate way of becoming parents. A few users were okay with adoption and numerous comments said,”adopt not shop.”

However the bottom line of all such comments is the expectation from a womb-bearer to carry children at all costs, and if she can’t or chooses not to and takes another alternative route to parenting then she will be bound to be judged, insulted and labeled bad even if the decision might have the equal participation of her male partner.

Surrogacy is controversial, but why shame parents for going this way?

Surrogacy has always been a hugely controversial topic because there is definitely the commercial nature of international surrogacy treatments and the patriarchal value system that places high-value on having children and motherhood.

No doubt it has the potential of the commodification of women’s bodies, violation of their reproductive rights and exploitation via unethical practices. However what is particularly disturbing about Taslima Nasreen’s comments is that it not only out rightly shames surrogacy but pits it against biological parenthood which according to her seems to be an “organic” way of making babies compared to this technique to get “readymade babies.”

This is also an attack on parents by adoption who haven’t given birth – how can anyone say they do not bond with their babies? And we know enough of child abuse at the hands of these “biological” parents – so how does it matter how a baby is brought home?

While biological parenthood, especially motherhood remains hugely glorified in South Asia, especially in India, alternative ways of parenting like adoption and surrogacy remain the target of ridicule and censure. Women who can’t conceive or women who opt to remain childfree face huge stigma and discrimination in the society. In fact even women who produce only girl children are considered “lesser mothers” since only the mother of a son is considered to be the most respectable situation for women in these feudal patriarchal setups.

Hence the criticism against surrogacy in India is also misogynist and targets the women more than it does male parents by surrogacy.

In societies like India where the ultimate success and/or fulfillment of a woman is measured by not her career or professional success but her marital status and ability to bear children it is not a surprise that successful women especially in the entertainment industry where their bodies are already a product often go the surrogacy way to ensure they maintain this coveted “work-life balance.”

Recently the Bollywood mainstream film Mimi was a rather flimsy reflection on the complications of surrogacy and its commercialization, and hence shows the general lack of awareness about both the procedure and the law. Often surrogate mothers and babies are referred to in ‘sleazy’ language like the derogatory tweet by Taslima Nasreen, and the stigma grows.

The urge to leave one’s genes in the world is one of the most developed evolutionary urges in humans but private property and inheritance complicated this and since time immemorial we have had adoption as the alternate way to parent. With the advancement of IVF many other options have opened up to humans to have a child from outside their bodies.

If we think that a surrogate mother is “selling her body” and a coal miner or a soldier is not, we are just driven by Victorian morality and not ethical concerns. Ethical surrogacy within the purview of laws need not be shamed or ridiculed.

Update: Taslima Nasreen has since given an ‘explanation’ about her tweet saying it “wasn’t about Priyanka and Nick”. It still is derogatory of all kinds of motherhood other than biological, and that is still a problem not just in terms of assuming parenting of alternative kinds of parenthood, but also a shaming of women who “won’t go through pregnancy and childbirth” and the expectation this puts on them.