Who would you be if you were not afraid?

Fear in itself is good, but when fear overtakes the logic out of everything then it becomes a problem.

I have always been a non-adventurous person. While I know people who have bungee jumped, sky dived or simply followed their hearts, I had always taken a long time to reach there. There is always this ‘what if’ that takes the pleasure out of any situation until I resort to just routine. I do not enjoy being like this, but I have always been like this.

While the society accepts fear as a normal thing, is it really is? Yes, for survival it is important to be cautious. But that kind of fear that holds you back from being your best self it isn’t. I know many people who chose to be in their comfort zone rather than follow their calling.  I know people putting up with so many things so that they do not fall out of their comfort zone.

What you would be if you were not afraid?

But then, one day while talking to a friend, she casually asked me, ‘No seriously tell me, what you would be if you were not afraid?’

While answering her question I realized that there are so many things that I would have been if I was not afraid. I would also have accomplished so many things if only I did not operate from fear. But I did and I realized that fear is what has kept me from having everything that I had wanted myself to be or have.

While we spoke, my friend’s grandmother who was listening to our conversation, joined us. She was well into her late eighties. She sat down beside me with a smile and looked straight into my eyes.

‘Why are you so afraid? What is that you have that you would not lose anyway?’

She then proceeded on to show me her photo album. I saw a baby who no longer looks like the eighty year old granny sitting next to me. She showed me her parents, her family, her friends. The kind of life she had as a girl. The kind of house she had lived in. Everything in her life has changed. She could never keep with her all she had. She could not even keep with her in her eighties the way she looked like when she was eighteen. But what she did keep was a woman who was not afraid to shine.

‘You try to keep everything that is not yours, but forget to polish yourself and your experiences. The only two things that is yours to keep forever. And if you are lucky, a few genuine relationships.’

The wisdom in her simple words were so profound.

I still have a long way to go in taming my illogical fears. It is a tough job trust me. But seriously what would you say if I asked you ‘What would YOU be if you were not afraid?’ and would your answer set you on the path from ‘who you are’ to ‘what you really want to be?’

Image source: a still from the Marathi film Manja 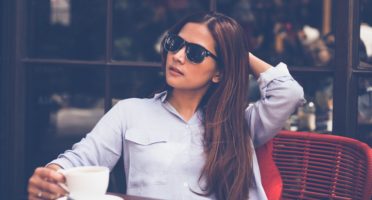