I Decided I’d Had Enough, And Became The ‘Rebel Bahu’!

I was allergic to vermillion. But I was forbidden to wash my hair for eight days after the wedding. Sari was mandatory. Else, what would be the difference between an unmarried girl and a newly-married girl?

My mother got married at the age of eighteen. A day before the wedding, the pieces of jewellery were laid out. That is when the matriarch of the family realized something amiss.  The soon-to-be bride’s nose was not pierced.  In those days, a pierced nose was compulsory.

My mother’s grandfather, a distinguished advocate, passed the verdict. ‘No piercing.’ He placed a trunk call to the groom’s family and informed them about his decision. The lawyer was widely respected and equally feared. No one objected.

On the day of the wedding, my mother wore a ‘false’ nose ring.

After marriage, she moved to a joint family where it was obligatory to wear a red sari, fill the middle parting of the hair with vermillion, sport the typical white and red bangles and wear the mandated jewellery. My paternal grandfather was a well-known doctor and revered by all. However, his ways were archaic and oppressive. All the women in the household had had their noses pierced. My mother was the only exception. The women tried their best to convince her.  They said that the nose pin would enhance her beauty. But mother refused.

One afternoon, my mother had just returned from college and had sat down for lunch. An eerie silence descended.  The young woman looked up from her plate to see her father-in-law standing in front of her.  Something sparkled in his hand. A diamond pin! Before she could cry out, the women caught hold of her, while my grandfather pierced her nose with the sharp pointed end of the stud.  The pain numbed her senses. The blood stained her sari and the food. But the hurt was deeper.

The news reached my mother’s grandfather. He placed a call to my father’s family. In the Advocate’s words, ‘I find these symbols oppressive. They are nothing but regressive practices, which serve no purpose other than chaining down a woman. The practice of piercing a woman, tattooing her or putting on bangles and emptying packs of vermilion on her hair is nothing but an expression of ownership. These are just our typical ways and means of controlling a woman. I will not allow my granddaughter to go through these rituals. ’

When I got married, I realized that the scenario hadn’t changed

The side parting of my hair changed to middle parting as tradition dictated that a vermilion-loaded middle parting was the norm. The parting cannot be left empty, as it was inauspicious. The broad forehead needed a dot. Be it red or maroon. Never a black as it was not meant for married women. The wrists which had always sported a fashionable watch or a fancy wristlet was laden with the typical white and red bangles, interspersed with gold. A thick gold chain went around my neck. The silver anklets announced my movements to all.  These items made me claustrophobic. I felt like a prisoner.

I was allergic to vermillion. But I was forbidden to wash my hair for eight days after the wedding. Sari was mandatory. Else, what would be the difference between an unmarried girl and a newly-married girl? At 25 years, with a thin frame, I would often be mistaken as a teenager. I requested some leniency. The husband, on behalf of me, got approval from the elders. Nightwear only at bedtime. But no one should know that the ‘bahu’ slept in fancy maxis. Every morning I changed into a sari before everyone woke up.

The first Tuesday after the wedding, the women of the household congregated to observe the Mangalchandi puja. It was customary for every married woman to observe it for the welfare of her husband. I was forced to fast, read out the scriptures, offer arati, distribute bhog to everyone and then retire for some food to satiate my hunger pangs. At the end of the puja, the vermillion offered to the Goddess was mixed with sticky oil and applied to my parting. One look at the mirror and I was aghast. Who was that staring back at me? An apparition?

I soon realized that these rules have existed for a long time. While the women picked up the baton and ensured that the rules were adhered to, the men kept a hawk’s eye.  The men have always been the lawmakers while the women have been the implementers. Always acting in a group, they passed down the code through generations not realizing the damage they were causing to their sisters.

I decided I have had enough. Cancelling my leave, I returned home, shampooed my hair, changed the parting, removed the bangles and donned my favourite outfit – a tee shirt and jeans.

It did not go down well with the people around me.  People questioned my upbringing. They hauled up my parents. How could they allow me?

That day I learnt that a married woman without sindur has no love or respect for her husband. The sindur applied in the ‘name of the husband’ ensures his longevity. Thus, my love for my partner was questionable.

A married woman without sindur has a questionable character for she is trying to hide her marital status and attract other men.

Shunning the symbols of marriage is an act of rebellion and is punishable. Such a woman brings a bad name to the family and should be taken to task.

Women who joined the family later stayed away from the ‘rebel bahu.’

But I had made up my mind. I will not allow anyone to coerce me to wear these. If I ever wear these, it will be my choice and not dictated by anyone.

Let me share another incident with you. I am a disciple of the first women’s ashram started under the guidance of Shri Ramakrishna Paramahamsa. Every time I stepped into the ashram wearing a salwar kurta, the Mataji’s sighed in exasperation.  The same old dialogues of not wearing a sari or sindur or bindi.

Every time this happened, my guru, who was the head of the ashram and a highly educated, widely travelled and much-revered woman would step in.  She would shoo away everyone and tell them to mind their business. Then in her gentle voice tell me, ‘turn a deaf ear to this nonsense. Concentrate on your inner wellness.’

My guru put an end to my dilemma of whether I should retain my maiden name or change it. She was the one who told me to follow my heart, make a wise choice and stick to it.  Whatever I wore or whatever name I carried was my choice. No one had the right to dictate.

Today I love my saris. Kohl and big Bindis are synonymous with my name. I love my jewellery and I deck up whenever I get the opportunity.  I reiterate that it’s by choice. These are just a means of presenting myself. Not a symbol attached to a religion or to my marital status.

When Your Child Becomes A Parent...What My Son's Love For A Female Pup Taught Me 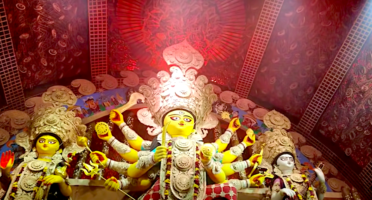