Why Do Parents Lovingly Raise Daughters Only To Say They’re Not Family Anymore After Marriage?

The once happy, driven and confident Rushali became a subservient, docile and low-spirited bahu in less than two months of her marriage.

This is the life of my friend Rushali – a confident, talented, studious and carefree young woman who lived in Punjab.

Rushali and I became best friends in primary school and have been inseparable since. Growing up, Rushali would often talk about her parents’ sacrifices and their immense support in all the dreams she had envisioned for her future. Her infectious laughter and carefree nature gave me hope in the toughest of times, and her determination to succeed both academically and professionally was inspiring to many.

Rushali completed a Bachelor of Science in Education with the hope to become a teacher. Whilst completing her undergraduate degree, she also tutored kids in her neighbourhood to support herself. But, as soon as she turned 25, her parents started looking for a prospective groom for her even though she had plans to start her career.

After meeting a couple of boys, the parents liked one who seemed progressive, earned a decent salary, and belonged to the same caste (a really important criteria for them). Rushali met this boy for a few hours and said yes to this rishta after being assured she would still be able to pursue her dream of becoming a teacher once married. She called me excitedly when her rishta had been sealed. She had found a partner who would support her in all life decisions, and most importantly, her career aspirations.

But things changed soon after marriage

The once happy, driven and confident Rushali became a subservient, docile, and low-spirited bahu in less than two months of her marriage. All her dreams had vanished and her education held zero importance, because her only purpose now was to cook, clean, and serve her parents-in-law.

She realised that her husband’s words were empty promises. He didn’t actually want her to work, but merely saw her as a (future) mother of his children. He went on business trips overseas and had fun with his friends every chance he got. But, Rushali had all colours sucked from her life. There was no support for her dreams – neither from her husband nor her in-laws.

As she tearfully recounted all this to me over a casual phone call, I asked her why she hadn’t talked to her parents about the ordeal she was facing – an unsupportive husband who didn’t have time for her let alone listen to her goals and ambitions, and parents-in-law who taunted her constantly. Rushali’s father is a prominent financial analyst in the city and could help her find a job without any hesitation.

A daughter is ‘paraya dhan’

I was shocked to hear that her father, who had lovingly raised her for 25 years, had blatantly replied that she has another family now and that any of her concerns are not his problem. She is no longer a part of his family.

A girl who spent 25 years with her parents (but has only been married for a few months and lives in a different house) is suddenly not considered family anymore by the very people who raised her and cared for her needs. She doesn’t feel at home at her husband’s house because her self-esteem, confidence and chutzpah to make an impact in this world deteriorated since she got married. So, what is ‘home’ for girls like Rushali? What is their haven? Why do parents lovingly raise their daughters only to say they’re not family anymore?

Why is it okay for boys to progress in their career but girls like Rushali remain trapped in their miserable, toxic lives and have to obliterate their personal dreams from not just their minds but their psyche? For girls like Rushali, divorce is not an option. So where will she go? Her parents don’t consider her family anymore and have no interest in her career, and she doesn’t have the finances to support herself. Parents who had spent 35 lakhs at their daughter’s wedding don’t see her career as an investment or her source of happiness.

Instead of viewing women as socially battered or home-wreckers, why can’t we see them as socially EMPOWERED if they choose to prioritise themselves, their dreams, their hobbies and ultimately their happiness? Why can’t our home always be our home even after getting married?

Until we understand this, Rushalis of India will continue to suffer at the hands of patriarchy.

*Names, occupations and places have been changed to protect identities. 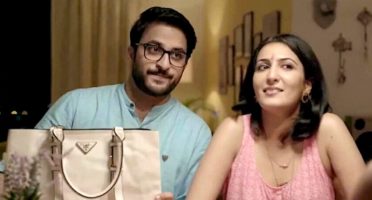