I got Covid and husband had to take over the cooking

After some days…months…years…When the second wave of COVID-19 came, my children and I fell ill.

All the responsibility of the household fell on my  pati dev (husband). With this, looking after his office, taking care of three patients together was a thorn in the side of  my husband. It was like he was trapped.

Which one is jeera (cumin) and saunf (fennel)?

Now, his first priority was cooking. On the first day, by asking me, he made something barely edible.  When it came to cooking dal (lentils), the first problem came in distinguishing between jeera (cumin) and saunf (fennel), and poor lentils were made with saunf (fennel).

On the second day, he took the help of YouTube. But this path was not so easy for him. Even after watching a video, there was complication in distinguishing between coriander  powder and garam masala.

But his food kept improving day by day. It seemed that perhaps he had become friends with the spices.

‘I know how much time it takes to make dal roti…’

When we were cured, we went to our sister-in-law’s place for a wedding. The whole house was busy with the marriage work. Confectionery-sweets and different types of dishes had been made, the fragrance of which was spreading all around. The gardener was decorating the whole house with beautiful and colourful flowers, which looked very beautiful and captivating. Small children are dancing on the DJ’s music. There was an atmosphere of happiness in Didi’s house.

Then, my husband and I saw brother-in-law scolding Didi, “You are here? There the children are crying! Why didn’t you make something? How long does it take to make dal roti?

Then my husband looked at me lovingly, laughed and went to Didi and brother-in-law. Looking at them with the same loving eyes, he said to his brother-in-law, “I know how long it takes to make dal and two rotis!”

And then, he smiled and walked away… 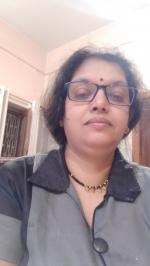