Must Watch: Heartwarming To See Dads Getting Over Their Discomfort To Talk To A Daughter About Periods…

Even today in India menstruation is considered a hush-hush topic. We don’t talk about periods in our houses and when it’s done it’s usually a conversation that happens between the ‘ladies’ of the house, and fathers/ brothers are not supposed to know anything about it.

Thinking about this issue, this Daughter’s Day, sanitary napkin brand StayFree India released a video titled ‘It’s Just A Period’. This video urges fathers to talk to their daughters about periods.

What happens in the video?

The video starts with a set-up where the brand has called many father-daughter duos to do an ad audition, in which they both have to read from a script.

While auditioning and reading the script the fathers realise that the ad involves talking about periods to their daughters.

They fumbled, hesitated and stammered while reading the script about periods, enough to make their daughters realise they were uncomfortable. 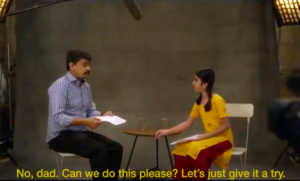 At points, the daughters also prompted them to say the word with a smile. Periods. A really difficult word for these dads obviously, to say.

Once that block was gotten over and after some time they got comfortable, and the conversation got easier. 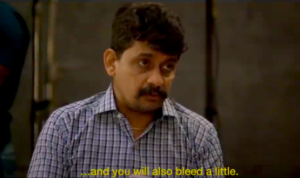 Soon after that, the fathers settled in, got over themselves, and actually spoke with their daughters about periods, without a script. The audition in turn became a conversation about periods between a father and a daughter.

You can watch the video here.

Yet, I have a question. The video mentions “we got 70 father-daughter pairs” but in the video we see only 7-8 duos. Is it that only 10% of those called for audition found this comfort? This sort of shows that maybe we still have a long way to go? Regardless, even this much can be called a success.

I remember that whenever my mother talked to me about periods it was usually in a closed room. Once she talked about it in the hall and my brother suddenly walked in. This led to her completely shutting up and changing the topic so that my brother could not know what we were talking about. Similarly, there have been certain instances where I and my friends have hid sanitary pads from our male friends or colleagues, only talked about menstruation with women and have always been conscious of the ‘stain’.

It’s not an unknown fact that women are always taught to not talk about periods. We are asked or sort of moulded in by society to hide periods from men. This whole idea of periods being a gruesome thing is what has been ingrained in society. This is what makes discussion about periods an unwelcomed or rather undiscussed topic in Indian households. Discussion regarding menstruation needs to be normalized in every family.

This video by Stayfree throws light on normalizing the discussion and even highlights the importance of this discussion when it happens between a father and a daughter.

But is this enough? Isn’t Stayfree guilty of…

While I loved Stayfree’s initiative towards doing a video to highlight the importance of fathers talking to their daughters about menstruation, I still have some issues.

In our country we often see brands trying to maximize their profit by talking about women’s issues whenever there is a topical day concerning women. This is something that is needed to be changed.

Apart from this Stayfree as a whole has been very regressive towards portraying the ‘happy go lucky’ and ‘everything is awesome’ image of periods in its ads. With that, the very significant idea of showing period blood as blue is also there. So on the one hand if StayFree thinks about leaving a good impact with initiatives like ‘It’s just a period’ it should also work on normalizing menstruation through its and try not to show it as the stereotypical image.