Where Are The Women In Docu-Series Alma Matters Inside The IIT Dream?

Hard working male students speak of their time at IIT Kharagpur and their dreams in Alma Matters, but where are the women?

Alma Matter- Inside the IIT Dream, a three-part Netflix docu-series directed by Pratik Patra and Prashant Raj attempts to delve into the world of the Indian Institute of Technology (IIT) Kharagpur, depicting some of the hard realities of the higher education system in our country.

The perspective of the docu-series is through the lens of IIT alumni as both the directors and several crew members are previous students of the institution, depicting the inside life at the institution. The story revolves around some of the larger themes such as overwhelming competition, inherent sexism, a fight to perceive identity, and an undying spirit to overcome challenges.

The cinematic drone shots of the campus give a glimpse of its geographically secluded reality, outside the hubbub of the city. The documentary captures its prime subjects in physical spaces like boys hostel rooms, classrooms, canteens and dhabas, labs, and playground areas.

Alma Matters promises to portray genuine stories via documenting reality. For that, representation of every class-caste-gender group should be a necessary requirement.

Women, Dalits, and the physically challenged have been ignored from the larger narrative of the story. The majority of students who are there in the series as speakers are upper-caste Hindu(s), and only a few belong to the upper caste Muslim and Christian community.

Caste-based discrimination has been a discoursed issue in the IITs. We have had a very recent example from IIT Kharagpur only where a teacher was caught while abusing the SC/ST students in her online class, but the series does not bother to mention their experiences, narratives, and voices in any possible way. There are approximately 20 boys from different departments and halls whom we see, but the representation of women ends with only 2 active voices. One of them is a sports captain talking about her gendered experience inside the university and the irony here is that there are no other stories of any other female students about their experiences.

The forced political correctness is obvious when the camera focuses on women’s issues only when there is a need to address the elephant in the room i.e feminism. Even here, the opinions of several men have been taken into account regarding the 1:9 ratio as a concern but no other woman. Effort to involve women is minimal.

Alma Matters does explore the anxieties around placements, classes, subject domains, future aspects, etc., but it seems as though these are the concerns only of the men of the university; the experiences of women seem like to have vanished somewhere in the air of the campus.

The stories, reflections, and expectations about the whole process of placement among the students of an IIT is minimized and captured inside the boys’ hostel rooms. There is a depiction of strong bonds and relationships of friendship inside boys’ halls/ hostels, they have been captured while preparing for the last significant days in the campus, celebrating the victories, and sharing their fears while enjoying a puff of their cigarettes or having beers.

On the other hand, it seems as though IIT Kharagpur have no women, or that their struggles and experiences deserve no screen time. At least this is the inference a viewer can make as the show very conveniently ignores or avoids the representation and voices of women in their daily lives. A single alumnus has spoken about her anger about the whole gendered environment of the campus in her days.

Of course, as compensation for the absent women, we have stills of women sitting over a rangoli, lighting diyas in Illu, and movement around hostel gates. There seems to be no place where their struggles and striving stories intersect or align with other students – the men. There is also absolutely no dialogue that we can see between the male and female students of the university, and the women seem to be overshadowed by the ‘hard working men’ who are apparently weighed down with immense pressure.

One just cannot accept this as the whole picture.

A question on the credibility of the show

Alma Matters brings together the testimonies from students and teachers from the academic year 2018-19 in its three episodes. Within those, the categorized segments help the audience to weave the different individual narratives into a single story.

The show attempts to be a ‘progressive’ one by including voices on issues like rampant sexism in STEM colleges and the high rates of suicides in those most prestigious universities. However, it lacks the requisite depth and original voices, and a question can be raised upon the credibility of the series when the issues like gender bias in a male-dominated setting are explored half-heartedly, managing to only scratch the surface with its political correctness.

The makers or the alumni might argue that there were difficulties with the access to women’s halls/ hostels, but one can’t ignore the fact that those weren’t the only spaces captured. Surely women students occupy other spaces like classes or other public areas?

We also see none of the women being asked about their understanding regarding the suicides inside the campus. They are only mute spectators, or participants in events like fests and cosplay.

This whole attempt that reeks of exclusion of voices and poor representation in a space like IIT Kharagpur is not merely laziness or a mistake, but a newly emerged and dangerous lens of ‘wokeness’.

Alma Matters does not address the presence of women beyond mere lip service to feminism. In the process, ironically, the show only ends up promulgating the very stereotype it wanted to break or deconstruct- that the ratio 1:9 of women to men is dangerous and should be higher.

Alas, Alma Matters makes it less than 1:10 in the show. 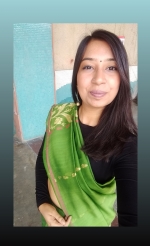 I am a Post Graduate in MA in Education from Ambedkar University Delhi. My MA