In India, gender is associated with a lot of professions for a long time now, often stating that some careers need more ‘physical strength.’ However, times are changing and so are we. Women across the nation and professions are challenging these set stereotypes every single day.

And one such woman is Christie Dias of Goa. We found out about Christie from the TEDx Speaker, entrepreneur and founder of GoWomania, Siya Shaikh.

A national-level volleyball player and now a plumber, Christie’s journey has been nothing short of wonderful and full of challenges. While women are breaking a number of barriers in the field of sports, women plumbing is something that is still unheard of. We have rarely ever seen women representation in that area of work.

From volleyball to plumbing, it hasn’t been an easy journey

In an effort to bring out this representation for girls bound by the constraints created by society, we interviewed Christie about her journey. Her story is something we hope will help break these stereotypes and inspire several girls across the nation.

When asked about herself, Christie says that she’s been playing volleyball from class four until the year 2018 when she played her last match. She played her first nationals match in the year 2008 and has also captained the Goa volleyball team.

Christie completed her diploma from Netaji Subhas National Institute of Sports (NSNIS) in Patiala and worked as a volleyball coach in Bangalore. “I worked in three different institutes and even tried to get a Government job as a physical education teacher but that didn’t seem to work out for me,” she says.

So where did plumbing come from? She says, “I wanted to grow in my life, wanted to stand on my feet, so I tried my hand at plumbing.”

An unplanned decision that changed her life

While plumbing wasn’t something she had planned on doing, she says it just happened naturally to her. “I just thought of it in the last 3 years, before that I had no special interest in it. To date, I do not know how I came in this line.

“But I knew that I would try for a government job and if that didn’t work out, I planned to go in the business line. Meanwhile, some of my friends were plumbers, so the environment may have had a slight impact on that,” she states. 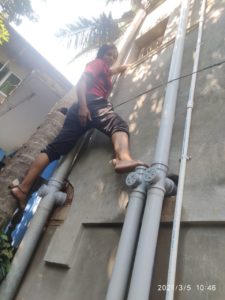 On her transition from volleyball to plumbing, Christie tells us, “I did not know anything about this job. Neither did I know how easy or difficult the work would be, if it was right or wrong, I did not think of anything. It just happened suddenly.”

She further told us the factor that gave her a push to make the transition from one career to another. “I was a Goa volleyball team player, national player and coach. The same field in which I had put in hard work since childhood, but that did not take me anywhere. I had to do something in life, which I could not do as a sportsperson. The field I wanted to go forward in did not happen, so I jumped in this field to stand on my own feet.”

She was told she wouldn’t ‘survive’ in her field of work!

When asked if she would ever drop plumbing and go back to a career in volleyball. She says, “I want to continue being in the plumbing line while being a player. As long as I am fit for the game, I will continue to represent the state.”

According to society, plumbing is one profession that is considered male-dominated, thus making it difficult for Christie to ‘survive in it.’ She says that a lot of people told her the same thing.

“When I started this job, many people told me that this is a man’s job, how did you come into this line? I had a hard time initially. People were reluctant to give me a job. When I started doing some maintenance work, I realised that women don’t generally do plumbing, which was why no one was willing to give me a job.”

Christie believes, “When a new tool or appliance comes, the male plumbers also have to learn to use it. It is as difficult for men as it would be for a woman to learn it.” This is a fact. As humans, we all have the basic knowledge of certain things and learning a new skill or technique remains the same regardless of gender.

With barely any support, she managed to do what she did

In the same vein, Christie also has a message for the younger generation, especially women. “If we run behind what society thinks, we will never be able to move forward. People will say a lot of things that will be both good and bad.

“But we have to do certain things for ourselves, stand on our feet, without shame, only then we can become someone we are proud of. Be it any job, plumbing or electrician, or anything else, if we keep thinking of people and what they will say, we will never move forward.”

As for her own experience in this field, she says she barely had any support in her line of work, however, she never gave up. She often told her family that she was going to go coach children and would do her plumbing work in her sports kit. 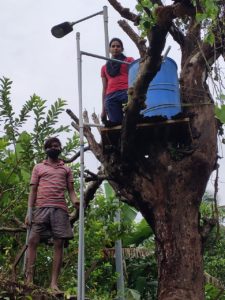 “I had no initial support. Subhash taught me everything I know now. Whenever he got any work, he would send me to do it. He is the reason I am here today. All plumbing work I do on my own today is simply because of his support,” she told us.

Her lessons are something we all can inculcate

We all need to have the attitude that Christie did with her work. If one thing doesn’t work out, we will look for something else!

When asked about her journey thus far and what it taught her, she replies, “If we don’t succeed in what we want to do in life, then we give up. If not this, we will try for something else. We should think that what happened, happened for good or maybe something better will come from it. Losing is not the end.

“This is what I learned from my journey. I tried a lot for a government job, but nothing happened. I cried a lot when I did not get the job. And I thought even after doing so much in this field, I did not get it. But today I think that the tears that I cried at that time were probably of happiness so that I can reach here today.”

She also says that if there are any girls who want to pursue plumbing, she is more than willing to teach them.

If you want to know more about Christie, you can find her on her Facebook page right here!

A student with a passion for languages and writing.