Janani Janarthanan is one of the winners picked by author Manreet Sodhi Someshwar for the January 2021 Muse of the Month. First titled ‘The List’, Manreet’s says this about the story: “loved the dialogue, the humour, and the ending.”

The perpetual agony for conservative Indian parents with a girl child is typically two-fold.

On one hand, we have a game of fate. A game where the parents are faces of the dice that is the girl’s life, and they hold on to their luck as the unpredictabilities roll by. The second is the agency of choice that their girl possesses in important matters. It is not so alien for parents to steer or suppress this agency at every given opportunity, to counterbalance the lack of control they experience on account of fate.

This particular agony often reaches its peak when the girl is societally deemed as ‘ready’ for marriage; a crucial moment in her life that is set in motion almost immediately after the doctors don’t find an appendage between her legs at birth. Instead, the girl becomes a proud owner of a countdown on her forehead that is visible only to the distant relatives she meets in family gatherings who deemed her ‘bride-ready’, and memorise her faults and virtues like arithmetic tables.

However, what the above assumption doesn’t account for is the girl’s spunk and her thoughts on the institution of marriage; an important factor often brushed off in the grand scheme of matchmaking. But the question remains, does the girl want a match? And more importantly, is that even a choice?

The latter question played on Neha’s mind too, like a volleyball enthusiastically passed over the net as she sat in the boardroom at her office. The digital clock in the room read 1:08 pm but her meeting didn’t seem to end. Her team leader Arvind had just dumped on her impossible monthly targets, and had moved on to torturous team bonding-motivational speeches. It was then that Neha’s phone which was on the table buzzed and flickered like an ouija board. Quickly cutting the call, she met the glares of her team leader and silently texted her mother who had called 4 times now.

Even without talking to her mother, Neha knew the context of the call. It wasn’t a hard guess. Her private opinion was that matrimonial websites were a kind of desi ‘Tinder’ for Indian parents who were in search of potential matches for their kids. In truth, the concept of finding a life-partner match based on appearances and self-reported details was time tested and not age-exclusive. And so, the existential tussle of marrying off the girl in her late twenties continued in her family with an obstinate mother on one side and an equally vociferous daughter on the opposite.

When the meeting ended, Neha dashed out of the room and rang up her mother in great fury but her mother dismissed the avalanche of rage with the unimportance of a common housefly. She instead insisted that her daughter meet a potential groom that very day. An exasperated Neha caved and a compromise was achieved. It was decided that Neha would meet the guy later that day after work.

Neha and her friend Natasha, who was dragged under the pretence that she would stay until the guy showed, sat at a corner table at a cafe near their office. Natasha was a colleague two years younger to Neha and was on principle, an everyday dissenter. She was one of those people who could never sit silently without a lingering question or a buzzing thought that had to be blurted out.

“You know… ’List of attributes for Prince Charming’ sort of thing.”

“That’s…juvenile..alright. The idea of a ‘Prince Charming’ and the idea that a laundry list of qualities will ensure a genuine character…seriously! I’d rather just talk and see if we connect. I’m not too keen on physicalities.”

“Right! All honourable eh? That’s what everybody says but deep down everybody has a type.”

“Well, I am not going to have this pointless conversation!” Neha replied, laughing it off.

“Okay, I’m not gonna tease it out of you,” Natasha responded in resignation with her hands raised.

“Not at all! Just makes the process harder but…whoever said marriage is easy?”

“But it looks like it’s just me. Men have a ready list prepared for them. A list for the ideal wife is widely circulated and equally conditioned. Like societal software, we are all expected to download and match up to it. And we’ve all been raised according to these expectations of a bygone generation.” Neha responded.

“And the worst part is, this list is even fed to men. Men want beautiful women. But what do they do when it’s beauty and brains? They hardly know how to handle it. Perhaps it is because we have no role models to emulate and they don’t look for examples to compare with. Even our parents call such women ‘too forward’.” Natasha joined in.

“Yeah…but,” Neha continued. “Since when is forward a bad word? ‘Forward’ is a matter of perspective. Women are racing ahead, having kids and careers, leaving men holding their dicks in their hands. You know, at one time, girls were sent to finishing schools to increase their market value? Like she is a commodity brokered between families. Well, guess what? It’s time for men’s finishing schools!”

An empty pause permeated the air before the two of them chuckled.

“Maybe you’ll know when you meet him. The uncertainty will wash off.’” Natasha offered.

“I’ll tell you what? I have an idea. Maybe you should just run away or say that you are a lesbian. That way they will leave you alone.” Natasha joked.

“And give my mother a heart attack?!” Neha laughed.

Just then, a young man in a suit walked towards their table.

“Hii, I’m Kunal. My mother…” he began with an outstretched hand.

“…set you up on a date with her?” Natasha completed. All of them laughed at that.

“A friend who was waiting with her, I’ll go now!“ Natasha chipped away as she left the table.

As Neha watched Natasha walk away, a sudden feeling of nervousness crept into her as if she were back in school and staring at a test question paper.

“So…umm… What would you like to eat?” He began.

Neha silently turned the lock on the door of her house with her key and tiptoed towards her room. She soundlessly pressed down the door handle to her room hoping her mother wouldn’t notice.

“How was the boy?” Her mother thundered from behind.

“Ma, you know…I don’t think this one will work out.”

“What excuse are you going to give now? I’m so tired of …”

“No, tell me, even I want to understand.”

“I think that boy is…not interested in women in general.”

“What?! How is that possible? Did he tell you?”

“I don’t know ma, it’s such a delicate subject. I didn’t know how to approach it outright.”

“But…why would they put an advertisement?”

“Maybe his mother doesn’t listen to him either, maybe he never got a chance to talk about it.”

Neha shut the door on her annoyed mother’s face, and the latter seemed to have been caught off guard. Generations of match-making had not prepared her for this situation. In fact, generations of match-making have been so unidimensional that parents are ill-equipped to understand, let alone deal with such a possibility. She simply put her hands up and resigned to a conclusion on the particular boy as a twist of fate.

Diffusing the matter at hand, Neha quietly shuffled into the washroom. She looked into the mirror and observed her own profile, her face, her square rimmed glasses and the lipstick that she had worn for the meeting. The corners of her mouth curled into a smile.  Suddenly, her phone buzzed in her pocket.

Natasha: Are you fleeing the city?🤣
_😂😂😂 Not yet. I don’t think I’ll have to
Natasha: What did you tell her?
_Something that wasn’t on her list”

Editor’s note: This month’s cue has been selected by Manreet Sodhi Someshwar, whom we have interviewed here.

Manreet Sodhi Someshwar is a multiple award-winning and bestselling writer of six books, including the Mehrunisa series – The Taj Conspiracy (2012), and The Hunt for Kohinoor (2014), the critically-acclaimed books The Long Walk Home (2009) and The Radiance of a Thousand Suns (2019), as well as Earning the Laundry Stripes (2014) and her latest, Girls and the City (2020). Hailed as ‘a star on the literary horizon’ by Khushwant Singh and garnering endorsements from Gulzar for two of her books, Manreet and her work have featured at literary festivals in Singapore, Shanghai, Hong Kong, India and NYC. Her articles have appeared in The New York Times, the South China Morning Post and several Indian publications. Manreet lives in New York, New York, with her husband, daughter and cat.

The cue is from her book Girls and the City, which had to be incorporated in the stories – whether at the beginning, end, or somewhere in between.

“Men love beautiful women. But when it’s beauty and brains, they don’t know how to handle it. Because we have no role models to emulate? Even our parents call such women ‘too forward’. When actually it’s the men who are backward. Women are racing ahead, having kids and careers, leaving men holding their dicks in their hands. You know, at one time, girls were sent to finishing schools to increase their market value? Well, guess what? It’s time for men’s finishing schools!”

Image source: a still from the web series Little Things 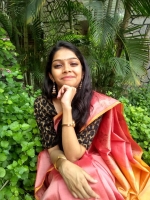 My name is Janani Janarthanan. I’m a 21-year-old student, who just completed

Of Arranged Marriages And The Underlying Tales That Are The Bane Of A Single Girl’s Life!