Why Can’t Women Speak Up Uncle Ji? Your Misogyny Is Showing!

There’s a difference between disagreeing with someone and attacking their looks or conditions to bring them down, making yourself superior in the process.

Society hates outspoken and confident women with a platform.

East, West and everything in between, outspoken women set off a rabid band of middle-aged men – sometimes younger – who must remind these ‘wayward women’ of their ‘station in life’. Apparently, that station is, “No one asked you. Your genitalia means you have no mind: no mind, no right to an opinion.”

Unless, that is, you support the mainstream view, then you’re a virtuous woman who was trained properly.

But women mustn’t speak up, of course!

Something alarming came to my attention when following the Farmer’s Protests. As soon as female notables weighed in on the situation, a swarm of uncles descended on Twitter to defame them.

Slut-shaming, criticism of their looks, ableism, and anything else these accounts could find to wear them down to submit. It’s worked on us Indian women so why not apply it to the rest of the world? After all, the rest of the world is too Westernised. Too many women strut around with their own incomes, decide who gets access to their bodies, decide if they want children and how many, walk away from abusive relationships and refuse to enter imbalanced marriages and it’s all out of control. Someone needs to stop them(!)

Rihanna, Greta Thunberg and Mia Khalifa, women from different walks of life, all expressed their opinions on the Farmer’s Protests. Instead of ignoring them if they didn’t agree – like a sensible person would – the crazed uncles laid these women’s pasts bare on social media. Images of promiscuity and judgement on appearances were used as evidence that they couldn’t possibly have the right to speak out because they were impure in some way.

You don’t have to like or agree with their life choices. Using it as a danda [stick] to beat them with goes beyond crossing the line. It’s misogyny.

One thing, in particular, snatched my breath when trying to surface from the thrashing Twitter whirlpool. Kangana Ranaut, the person I once held in high esteem for being self-made and tenacious with her identity, joined in with the abuse. She echoed the slut-shaming and snide remarks when she had once modelled in lingerie and had her own history of pre-marital relationships. So it’s OK for some women but not others?

The ‘good’ women, enlisted as foot soldiers of patriarchy

We’ve progressed to a higher level of woman vs. woman. It’s always been known that misogyny gets help from women too. The uncles have female allies who are assisting them in taking down any other woman who practises free will.

It all begins in the domestic setting. How many times have men gathered around to discuss politics while the women are excluded and relegated to idle chit chat? (My apologies if you do actually like to do that, my argument is that we’re all forced to do it!) I experience that during every family meetup. The world and its variety fascinate me, but because I’m a young woman (even further down the hierarchy) I’m scolded whenever I try to join in fascinating discussions involving the men.

Scolded by whom – can you guess?

The ‘sisterhood’ is a fallacy right now, in ‘good’ women circles.

Outliers ‘put in their place’

Again, there’s a difference between disagreeing with someone and attacking their looks or conditions to bring them down, making yourself superior in the process.

I don’t want to know my place.

I certainly don’t want other women helping to hold me there.

We should have the freedom to express ourselves, and not have derogatory words and behaviour beat us into submission. We should be able to express dismay about how society treats certain people without looks, income, actions and hidden disabilities presented as reasons why we should shut up.

Women, it’s time to get angry, abuse be damned. Our bodies shouldn’t be barriers to us having viewpoints on concerning situations. Nor should we be so eager to tear other women down at the click of uncle’s fingers. Disagree with others, if you want, just don’t join the misogyny parade.

Let’s not be soldiers in the war on women exercising their autonomy.

Image source: a still from the film Saand ki Aankh 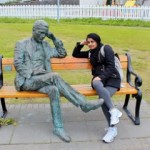 My dystopian book Borders is available through most online vendors. A British-Indian caught between

Why Women Need To Fight Misogyny In Politics