Remnants of a Separation goes beyond mere numbers, evoking empathy and building familiarity in a way that it seems like we are sitting there, with her.

“Partition” – the sarhad that divided British ruled India into two separate, sovereign states – India and Pakistan on August 14th and 15th, 1947. As a catastrophic consequence of which, millions found themselves on the ‘wrong’ side of the border, and hence began one of the largest migrations in human history.

The unprecedented scale of violence emanating from the events of 1947 forms one of the worst tragedies of the 20th century. ‘Independence’ for both the nations came with a heavy price – of family, of home, of belongings, and most importantly, of identity.

Amongst the multifarious accounts tracing the history of Partition, there is a book that explores the blood imbrued legacy of the Great Divide, of Takseem-e-Hind through a different medium – memories and objects, both of which were carried and retained by those who crossed the border to either side.

Aanchal Malhotra’s Remnants of a Separation: A History of the Partition Through Material Memory is a repository of emotions attached and detached with one’s land, a poignant account of home that was left in anticipation, in confusion, but in finality regardless.

An archive of memories

Accentuating the potency and the nuances of Oral History, Remnants of a Separation becomes central in our understanding of a cataclysmic event like Partition through individual memories, and experiences that are distinct, but not in “isolation from the political or social framework.”

An alternate history of partition, Aanchal Malhotra’s seminal work goes beyond bare records and documentations to include the subjective, more reachable, more human subset of it.

“It is in this informal style, where history, memory and life meet at the heart of oral storytelling, that this book has been written.”

The art of conversation, the act of ‘listening’ is the foundation of Oral History; Remnants underpins my belief in that ‘conversation’. The analytical, the scholastic approach of the documentary archives – as crucial as they are – cannot fathom the personal, the emotional, the psychological conflicts of those whose upturned lives was the ramification of greater political decisions.

The statistical form of history is not adept to equip us with a more chasmic understanding of the shared trauma, the pain of displacement and of lost identity, the strength and the stories of survival.

Memory, even though a passive subject of time and age, is pivotal for forging personal history – the collection of which contributes in the extending and enriching of the national history. Aanchal augments this by writing:

“Memorialization is not a passive practice but an active conversation. By studying the evolution of personal histories from that period, we allow ourselves to unravel further and understand better the legacy of the Partition.”

The collection of remembrances laden with palpable experiences of unmitigated disasters, Oral history is not only a transparent insight into the past but is also unsettling in the amount of responsibility and the power of absorption it demands. Remnants fulfills that responsibility not only with precision, but also with an artistic and emotional property.

To hold history in your hands

The relics that bridge the gap between the two complex world of present and past, objects that stand between remembering and forgetting – a Gaz and a Ghara, maang-tikka of Bhag Malhotra, Pearls of Azra Haq, the Stone Plaque of Mian Faiz Rabbani, Poems of Prabhjot Kaur – Remnants is a chronicle of objects that became the physical manifestation of history. 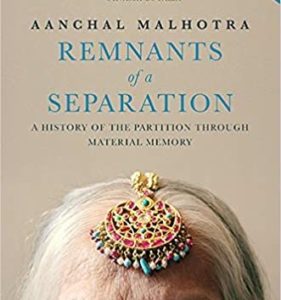 As diverse as household items, jewelry and valuables to notebooks and ‘dialects’, these are the remains of the land separated by national borders which slipped through the cracks of time, becoming a testimony to the vulnerability, longing, loss, family, and separation that ensued Partition.

“I wanted to know what it felt like to hold in one’s hands a tangible part of one’s history.” Aanchal Malhotra curated an assemblage of stories which stemmed from a highly volatile period of Indian history, and yet they became the only vestige of the past, the connection to an abandoned homeland.

Carried for different purposes, some for their value, some for survival, others as souvenirs of family history – these objects ultimately became the means to reminisce a period of life cached in a dust ridden, forgotten part of memory.

In 21 chapters, Aanchal Malhotra brings together; history that is personal, yet national, artefacts that are now the carriers of one’s roots, people who lived and ‘physically’ survived the horrors of partition. Remnants of a Separation goes beyond mere numbers, evoking empathy and building familiarity in a way that it seems like we are sitting there, with her.

It is an anomaly, a prodigy of “Partition Studies”.

If you would like to pick up a copy of Remnants of a Separation: A History of the Partition Through Material Memory by Aanchal Malhotra, use our affiliate links at Amazon India, and at Amazon US. 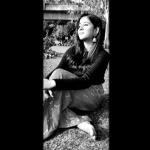 20. I am pursuing English Literature from Jamia Millia Islamia, New Delhi. I come from

Like All Of History, The Partition Too Saw Women As Secondary, Says Oral Historian Aanchal Malhotra

A Curated List Of 7 Books On Partition By Women Authors, To Choose Your Summer Read From