Why Has Priyanka Chopra Jonas Named Her Upcoming Memoir ‘Unfinished’?

Priyanka Chopra Jonas has just announced the release of her memoir titled ‘Unfinished’ on 19th January, 2021, and speaks of what drives her.

Priyanka Chopra Jonas has just announced the release of her memoir titled ‘Unfinished’ on 19th January, 2021, and speaks of what drives her.

Actor- Producer Priyanka Chopra Jonas has been a prominent personality for almost 20 years. From being crowned Miss World in the year 2000 to becoming a global icon, she has remained a popular and adored personality.

Despite being in the film industry for such a long time, rarely has she opened up about her personal life and challenges in any way or form. But, now she is ready to tell her story.

Priyanka Chopra Jonas is ready to release her memoir –‘ Unfinished’ on 19th January, 2021. 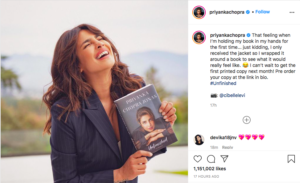 “Having been a public person for 20 years, with so much life to live and a long list of things to check off my list personally and professionally, I am very much Unfinished.” She wrote in an Instagram post. She also added that Unfinished had a greater meaning for her and has been one of the most common threads of her life.

“Taken many leaps of faith, often when I was advised not to”

Opening up about what her parents taught her and the challenges she faced, Priyanka wrote that she has always been guided by her curiosity, drive for challenge, and intrinsic need to constantly evolve and move forward.

She added, “I have taken many leaps of faith, oftentimes when I was advised not to…and even when I too was afraid.”

She also added that she never shielded away from change, or forced guilt on leaving something unfinished, if that’s what her evolution as an individual required.

What will readers see?

Talking about her memoir, Priyanka says that the readers will learn how she “became me during the ‘in between’ of what you haven’t seen” She also hopes that the memoir helps readers “understand the resilience and grace under fire that is needed to chase their dreams.”

She hopes that the readers will walk away with confidence of knowing that it’s OK to pick up, walk away, leave things unfinished , and move on to what’s next if that’s what your journey requires to get to the next destination.

An inspiration to many

Priyanka Chopra Jonas has been an inspiration to many young girls across cities and towns who dare to dream big, and for many others who are trying to find a place for themselves in this world. Through her honest account of the challenges she faced in ‘Unfinished’, it is a hope that Priyanka continues to inspire many.

If you would like to pre-order a copy of Unfinished by Priyanka Chopra Jonas, use our affiliate links at Amazon India, and at Amazon US.