Nirvana Inn is skillfully scripted psychological thriller having horror elements, with subplots that contribute immensely to the central theme.

Nirvana Inn is skillfully scripted psychological thriller having horror elements, with subplots that contribute immensely to the central theme.

It was not a conscious decision, but just coincidence that I happened to watch Nirvana Inn, with its well-designed spooky aspects, on Halloween Day. The film was a part of the screenings at the Indian Film Festival of Cincinnati.

Premiered in the Busan International Film Festival of 2019, Nirvana Inn clearly deviates from the norms that generally govern movies in the thriller genre. To quote director Vijay Jayapal, “It’s more of a psychological drama with elements of horror and mystery thriller”.

The story of Nirvana Inn

Jogiraj Chakraborty, who was a boatman and later a Bhaona performer, leaves his home in the riverine island of Majuli in Assam to work as a caretaker at the titular Nirvana Inn. The lodge is built amongst the serenity and beauty of the mountains in Himachal Pradesh. Ironically, tranquility and peace of mind are largely absent from Jogi’s life. To escape a traumatic experience, he seeks refuge in this place far away from his roots.

The past, however, usurps the present. The guests who come to the inn are people that Jogi had encountered earlier and who are presumably dead. He hears strange noises at night and has distressing nightmares. There is also a masked man who keeps appearing before him.

Is Jogi seeing things for real, or is it a disturbed mind that is playing games? Can he overcome the paranoia, dodge the past, and make truce with the present? Vijay Jayapal’s phenomenal thriller will take you on a journey with its jolts and bumps.

A neat package that offers a lot

Nirvana Inn is skillfully scripted with subplots that contribute immensely to the central theme. These scenes represent an extension of the horror that prevails even beyond the paranoia in Jogi’s heart and mind.

A mechanic’s daughter is shown to be possessed by evil spirits. There is also a scene where two siblings who are guests at the inn get into a fight. The ugly glares the children exchange send evil vibes and do not in the slightest resemble any altercation that little ones get into.

The visual shots in the film stand out, with beauty and horror being brilliantly juxtaposed. Just as we are drowned in the loveliness of the mountains outdoors, the darkness inside the inn subtly communicates a message of fear and discomfort.

The background score impeccably succeeds in accentuating the eerie feeling. It creates an air of suspense and suspicion that hovers over perennially.

The character of Jogi is rather unique too. As flawed as he is, you do not end up disliking him. I’d rather say your feelings will be in a state of ambivalence.

Being from Assam, it was a treat to see glimpses of Bhaona, which is a traditional form of entertainment so dear to our hearts. I could also totally relate to the Hindi spoken by Jogi with the Assamese twang.

The only glitch I felt was the pace of the film. It could have been a bit faster. However, this might have been a deliberate step on the part of the director. Anything that torments the psyche is a slow process that seems to stretch and never end. Jogi’s mental turmoil is perhaps delineated through this technique.

A talented ensemble of actors with Adil Hussain shining out 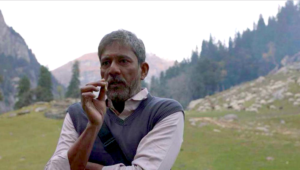 Adil Hussain essays the role of Jogi Chakraborty with artistic perfection. He does not have too many dialogues to deliver, considering the fact that as the protagonist, one would expect him to speak a lot. His facial expressions and body movements bring the character alive.

Without giving away too many spoilers, I would like to refer in particular to a scene where Jogi, engulfed by his guilt, has an emotional breakdown in front of a young guest. His pain and suffering come out as real, and it is so heartbreaking to see him in that helpless state.

The actor delivers a master-class performance and proves once again that versatility is his trademark. It is hard to believe that this is the same actor who played the obedient son in Mukti Bhawan, the strict father in What Will People Say, and the wacky doctor giving us those comic moments in the commercial flick Good Newwz.

It is important to note that Adil Hussain bagged the Best Actor award for his roles in Nirvana Inn and Pareeksha at the IndoGerman Filmweek in Berlin last month.

Hussain is ably complimented by two other actors who do justice to their parts. Sandhya Mridul as Leela, a filmmaker visiting the inn, is admirable. Rajshri Deshpande as Mohini, a seductive woman, lends credibility to her role.

A truth that emerges from the film

Nirvana Inn raises questions that compel you to think rather than making you revisit a repository of horror scenes that send a chill down the spine.

There could be some metaphorical innuendo behind the naming of the lodge as Nirvana Inn. As per the tenets of Buddhism, nirvana refers to a state where one transcends suffering and desire and is freed from the effects of karma as well as the cycle of death and rebirth. One might decipher that the inn is the final destination where Jogi seeks respite to detach himself from his painful past.

It is encouraging to see a talented group of independent filmmakers making inroads into the film industry with their diligent projects. Vijay Jayapal definitely belongs to this class.

Whether Jayapal wants to convey a moral lesson is debatable. It is totally left up to the viewer’s interpretation. But you can’t help but think that there is truth in the subject matter. The film convinces one to believe that the phantoms from a guilty past can emerge to take control over the present.