Why Are Women Expected To Make ‘Adjustments’ Or ‘Compromises’ After Marriage?

While marriage is the union of two, often, only women have to make compromises and adjustments. Why are henna laden hands a sign of broken dreams and a restricted life?

While marriage is the union of two, often, only women have to make compromises and adjustments. Why are henna laden hands a sign of broken dreams and a restricted life?

Marriage is a union of two people who dream to spend their whole life with each other. In Sorrow and happiness, they promise to hold each other’s hands. Then why we expect a woman to adjust “or do ‘Compromises’ after marriage. A series of “adjustments” begin from here, when she takes her first step to the house of in-laws.

The “whys” in the life of a married women

From then on, in-laws expect her to follow their family traditions and customs.  Being a newly married, I can relate to this ball game more. A scene from the movie “Thappad” that we all married women can delineate. In this actress, Taapsee Pannu’s on-screen mom talking to her husband that women have to learn tolerance and make adjustments after marriage. She had dreamt to be a singer but had to compromise with her dream because her mother taught her that it is her primary responsibility to look out for her children and husband. Why are women taught to lose their identity after marriage on the name of ‘Compromises’? Why cannot women follow their passion after marriage? There are so many whys.

Why are women passing the burden on?

How do you feel when you get a call from your mother in law, just to make you understand how “Adjustments “are important in women’s life to make their marriage successful? I felt terrible and was numb for two minutes. How can we break such stereotypes when one woman wants another woman to do ‘Compromises’ as she did in her time? Is it fair to any woman?

Married women can do much more

I must say time is changing now, today’s women can be a mother as well as successful doctor, actress, entrepreneur, or anything else they want to be. Along with her profession, she is managing her family and home superlatively. But it will be super easy breezy for her to do this if we can take off the hovering cloud of adjustments from her mind. To make marriage life successful, both of them should give wings to each other’s dreams and should manage the house and children together. 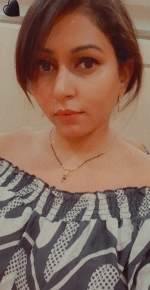 Vijeta Rana is an MDR-Tuberculosis survivor and HR Manager by profession. She had given a tough fight to multidrug-resistant - tuberculosis for almost 4 years and finally she won. After that, her perspective has read more...