The Terrace And Lockdown

It’s often in the times we spend away from everyday life that we discover little things we didn’t know we needed. Read further for more insight.

What happens to a speeding car when it comes to a sudden halt, by the pull of the handbrake? Especially, if it isn’t the driver who has pulled it!

Such was the case, when a sudden lockdown was announced, six months back. Seems like a way of life now, but then, we were abruptly asked to live in a manner we haven’t been conditioned to. Clueless to what will come next, we began to adjust and survive, and then moved on to evolve and thrive in these very unforeseeable circumstances.

Spending time on the terrace, became an important part of my routine in this period. It started as a means, to spend some time outside the four walls of the house daily. Over a period of time, it became the most significant part of my day. It humbled me down, grounded me, to observe that vastness of the sky, day after day.

I witnessed the change in colors and aromas of the atmosphere, with the reduction in emission of chemicals. I heard how birds and animals communicate, when the noises of us humans and our machineries died down. I noticed how the true shade of sky blue emerged with each passing day. I saw the birds claim their home when the artificial birds had to cease operations.

Initially when I had started spending time on the tiny root top above the main terrace, the flying creatures were scared of me, rejected me, stopped sitting at the perches they usually did, around the roof. I would try to bribe them water bowls and crumbs of breads and other edibles.

Eventually, when they saw I am harmless and a regular visitor, they considered me their own, adopted me. They started flying past me without hesitation, and reclaimed their old spots. I have never felt true inclusion like this before. No communication was required, no words were exchanged. Just being there was enough.

This silent period also made me focus on the voices inside my head which I had been ignoring for so long. Or maybe, had been interpreting incorrectly. With nowhere to go, no one to speak to on that isolated rooftop and exhausted with the use of technology, I really listened to myself.

Layer by layer, peeled the dirt of hurt which I caused myself or were seemingly caused by others. I realized, it was always me, who chose to be in pain. I was shedding my old patterns and behaviors, and they were being transmuted by the loving breeze of the evenings. I began to slowly understand the larger purpose of my existence.

This terrace, which began as an escape, turned out to be an inspiration for me. If fear or despair enveloped me during the day, a few moments in the open air helped me release everything which was not love. The two hours I spent here every day, became my recharging moments for the next twenty four hours. This small ten by ten feet of space has become a sanctified zone for me.

Even now, when the lockdown is opening up, we are free to roam around as we wish to, spending a couple of hours on the rooftop (which I call super terrace) has become a necessary part of my life. I have understood that it is not the space, but how I feel when I am there, is what has made the difference. And I can now choose to feel that anywhere I am. This write-up doesn’t come close to what you have given me, but, Dear Terrace, I will be forever grateful. 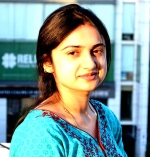 Why I Think This Lockdown Is A Blessing In Disguise For Me And My Family!

How Are 20+ Yr Olds Used To A Happening Life Handling Social Distancing During COVID-19?