The Truth of Humanity

In a biased and unjust world, have we forgotten what humanity stood for? Read more to find out.

After the tragic death of George Floyd, my social media handles were flooded with black square posters, videos, and posts. I opened up my Instagram and Twitter page, but couldn’t write anything. My ideas were choked and lost in the truth. The truth that we live in a biased, racist, and discriminatory world. From black injustice to religious intolerance, oppression against women to social exclusion of LGBTQ+ community, cruelty against animals to hate against nationalities; the truth of fake Pride and inherent Prejudice is out in the world.

If we know the truth, why aren’t we doing anything?

Because the truth is that it is not easy to act upon; it requires years of persistence and an entire generation’s collective effort. If we look at our hierarchical social structure, culture-assigned roles for men and women, discrimination against the LGBTQ+ community – we can understand how far we are from acting upon the truth.

Whenever incidents like George Floyd’s murder or lynching of the LGBTQ+ community or burning women in the name of witchcraft come to picture; we pour out our sympathy. We feel for the victims, talk, discuss, and agitate for some time but soon move on. The impulse to bring change eventually dies out. Often,the core cause of the issue remains unaddressed.

Are we so adamant about societal structures?

We are not adamant, but in fact ignorant. We feel that being vocal about the root cause of social and cultural evils is not our responsibility. As long as it does not affect us, we feel safe. While situations keep growing worse, we choose to remain silent. This, we think will keep our social dignity intact.

So, there is no question of being adamant here; it is the question of survival for the victim. And, for the rest, it is a matter of power and privilege.

How are power and privilege standing in the way of structural change?

While one way to evaluate this is in intellectual terms, I would like to give two real-life examples.

Most of us know of the atrocities and inhuman acts against the inter-caste couples. I was made aware about one such incident by my friend within her family. She was from a Brahmin family. To keep the lineage pure, all marriages had been arranged within their caste.

My friend’s cousin brother, who worked in Delhi fell in love with a Kayastha girl. Fate brought them together, they got married; and had a baby. Fearing the obvious consequences, he hadn’t told his family. The couple and their child continued to live together happily in a remote place. One fine day, he receives a call from his mother asking him to come home and settle a land dispute.

Unaware of what’s lying ahead, he arrived at the village. On reaching, he  was brutally killed by his mother and brother. It so happened that someone from the village had spotted the couple earlier in Delhi.

When the cousin didn’t return home, his wife left her daughter in safe custody and went to search for him. Eventually, she too was killed by her in-laws. This incident never made it to any newspaper or news channels. Since these acts often happen within a community, they are not known in the outside world. Power is often used to silence any voices that choose to speak up.

The second incident occured when my husband and I crossed paths with two French men in Kerala. I wasn’t aware of this then, but they belonged to the LGBTQ+ community.

We were introduced to each other by our host over dinner. Post the meal, they invited us to sit with them. We began with small introductions and eventually talked about travel,politics, regional disparities, discrimination and so on. That night remains a lovely memory and we were in touch even after the trip.

After a few months, we discovered that the two men were a couple. At the time, they had told us about one horrible travel experience they had had in some part of India. People had bullied and tricked them because of their identity while they were in foreign land. So, for the rest of their trip, they maintained a low profile.  Once again, privilege and discrimination had bought their silence.

These are just two incidents among thousands that happen every day.  These cases scream the truth behind the silence.

How do we bring about change and become vocal?

What makes us human? Our humanity which exists beyond caste, race, gender and nations. We have to look beyond the shackles of our age-old beliefs. We must not love one and hate another.

We have to adhere to the values of humanity push those around us to do the same. It’s time that we realise that even when we can’t understand another person, we need to respect them. We have no right to decide how an individual must be treated.

Our identities extend beyond caste, community, gender or race. We are human beings, the most intelligent among species. With continued effort and the right kind of awareness, we will one day expunge societal biases and prejudices.  People only need to be reminded of the truth of humanity. 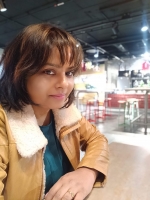 I am a Budget travel writer and photographer @meandersquest. My aim is to make people