All Her Life, She Tried To Be Less Like Her Mother, Yet Here She Was…

She had always struggled to step out of the shadow of her meek and submissive mother. Yet here she was realising, finally, how much she was like her mother.

Her head held high, slightly teasing the pleats of her aqua blue linen saree with each step, Dr Hira gracefully received applause for her personality grooming workshop. A coaxing and confident smile melted on her lips as people congratulated her for her demeanour, her sophisticated British accent, her dressing sense and what not!

It was a great day when she had incited and evoked a tremendous response from the participants of Bachelor of Vocation stream. While walking back to the parking lot of the institute she was skeptical as to who would relish the news of her being so happy. In the end, she decided to reach her mother – her only confidante and best friend in this world. She couldn’t wait to let her bathe her heart in the deluge of praises her mother poured on her heart. Unfortunately, her number was not reachable so she decided to try her phone after reaching home.

Dr Hira reached home and took many selfies in her new saree to put it up as her display pic on WhatsApp. She wasn’t allowed by her husband to use it on Facebook as that would be tantamount to committing sacrilege.

But in a fit of excitement she forgot that even a display picture on WhatsApp would invite the wrath her worldly husband. That her happiness would prove to be a flicker of the candle about to collapse in the caves of ambiguity. Innocently ignorant of the repercussions it might incur, she changed the DP and unfurled the status with the evidence of her euphoric mental state.

She basked and soaked in the avalanche of compliments she received for the entire day. But as the night descended, she felt a tinge of sharp intuition swallowing the trail of her incessant smile. Just then the doorbell rang. It was him, her husband Dr Ismail.

Dr. Ismail was a medical practitioner who believed in healing his patients more by the embalming impact of his tone and words than medicines. His tone, his soft velvety voice was a placebo – that worked miraculously for patients. He never lost his temper and prodigiously and lavishly laid it on the gaze and ailments of the onlookers- a heart throb he was. And was loved for his mild and gentle demeanour.

Now, here he was, in front of Hira, holding slingshot in his eyes and spears lacing the fringes of his otherwise calm tone. Holding the expanded image of the DP in his cellphone, he hissed- “Is this how you put up yourself on exhibition-on a flagrant display? How thirsty are you for a male gape that despite intermittent rebuffing you’re constantly violating the boundaries?”

Dr Hira was aghast. In shock and pain she said, “But I am draping the saree properly, and nothing is visible. And today I earned so much respect and applause for my session on personality development in Diamond Harbour College. I was eagerly waiting to share with you. And I called you up on your phone but you disconnected my number.”

Ismail used all his spears in one go, “I am asking why did you put up your pic as DP? I told you not to! How dare you pose in that apparently sexy mien? Remove that DP now!”

She removed the DP with tears pouring down her blazing cheeks that burnt in embarrassment.

After serving him dinner she tried to pursue the matter in a calm tone. She said, “Ismail, I am a faculty, my job is to teach boys and girls, men and women. How can I remain hidden on social media and teach openly in person? I am not a traditional, backward village girl – a lout! And I know better to decide things for myself by defining and keeping my modesty intact by my attitude and behaviour. I have respected your likes and dislikes for long. But  as a professor I feel I know how to carry myself with grace without allowing anyone to fidget with my identity.”

Ismail, “Then allow me to call you a characterless woman, who is fond of praises by other men.”

Hira, “By that definition, I return the same phrase to you.”

Hira couldn’t understand for few seconds what had happened to her. She fell down and after a while felt a sharp burning sensation on her right cheek and piercing pain on her lips. And felt the raw pungent taste of blood. She still needed to confirm for herself that it was blood, and it was!

Her lower lip had burst and blood flowed, drenching her chin and neck. She tried recollecting through her whizzing mind that something hit her. Her eyes bulged recalling that her husband Ismail hit her! She ran to another room and locked the door from inside lest her kids wake up to the sound of the fiasco that had just taken place.

But there she was, howling, wailing, crying, shouting all by herself, all to herself! She still couldn’t reconcile herself to the harshest truth of being hit by her all doting husband. Dr. Hira had been a kind of feminist in her life, especially for the past 14 years – refusing to bow down to patriarchy in all its manifestations.

But here she was scrubbing her face again and again. Rubbing the blood and the smudges of her mother’s face materialising on her skin under the sensation of the slap she received moments ago. She had always struggled to step out of the shadow of her meek and submissive mother. Yet here she felt she was strongly being pulled into it and understood at last she was like her mother.

This short story had been shortlisted for the August 2020 Muse of the Month contest. 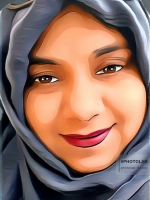 Assistant professor in English in a Govt Degree College. Fond of writing poems and short

Yes, Urinary Incontinence Is Embarrassing. But Hiding It Under The Sheets Doesn’t Help