10 Graphic Design Artists On Instagram To Look Up For Inspiration

As the celebrated American graphic designer, Milton Glaser, said, “There are three responses to a piece of design – yes, no, and WOW! Wow is the one to aim for.”

‘Graphic design’ has gained great popularity in recent times although it has been prevailing since the origin of human existence, only sans the name. Quite naturally, some people like the graphic designer David Carson, have gone as far as saying that “Graphic design will save the world right after rock and roll does.”

Simply put, graphic design is anything that combines text and pictures using typography, photography, and illustration for advertisements, magazines, books, or more recently, even for the web.

Design is where science and art break even. And so, when the science in the form of technology is moving forward to newer platforms like Instagram, how could art in the form of design not catch up?

You will find tons of wonderful graphic designers on Instagram all showcasing their cool designs but not all of them will elicit a WOW kind of response from you.

So, here are the 10 WOW ones of the lot whose Instagram feed would inspire you. 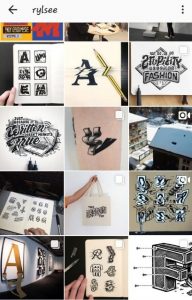 Based in Berlin and with a focus on a new level of perception, Cyril tries his hand at illustrations, visual effects, logos, murals, wall animations, and loves playing with letters. He has done illustrations for Nike and often highlights the negative impact that social media can have through his art. He finds Freehanded drawings important to discover new effects and techniques and feels they are also a good brain-gymnastique. He shares pictures of his ongoing work on his shows and exhibitions, his installations, sneaks peeks into his new artworks for an upcoming exhibition, an occasional video of his sketchbook, and much more. 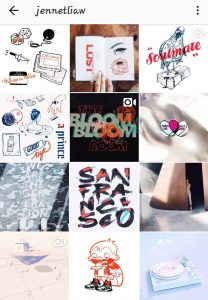 Based in New York City, this versatile creative artist’s feed is anything but mundane. There might hardly be anything in the universe of design that she hasn’t tried her hands at and that’s what makes her difficult to define. Jennet’s posts include that of her creative works including mural designs and lettering and an occasional peek into her life as a designer. Her Instagram feed is a work of art in itself. 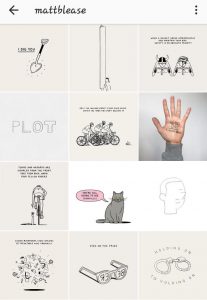 The next featured graphic designer on the list is illustrator Matt Blease. With his minimalistic approach, he makes the design look easy. He personifies the famous quote by Paul Rand, “Design is so simple. That’s why it’s so complicated.” If you are looking for never-ending inspiration, Matt Blease is the graphic designer to follow. 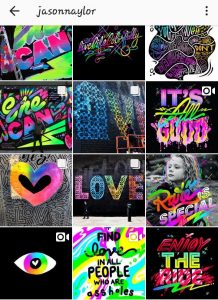 Bright, colourful, and ever-inspiring, this artist’s posts will ensure that there isn’t ever a dull moment in your Instagram feed. His work is deeply connected to and inspired by the city of New York. There’s an underlying yet unmistakable sense of trying and wanting to bring about positive social change through his art in his posts which is so heart-warming. 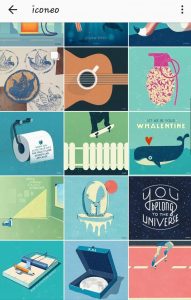 Also, an author and a yogi, this graphic designer’s vast variety of illustrations are a visual treat. Once you get a taste of his style of designing, you will be craving to see more of it. Full of imagination and thoughtful designs, this artist’s feed has no dearth of creativity. Also, keep an eye for how different, amazing and inspiring a perspective he chooses to display art through. 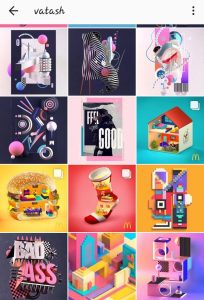 Prateek is one of the quintessential gen z graphic designers to follow on Instagram. His posts are nothing if not eye-catching. He focuses on 3D art and his feed is flooded with abstract 3D art, designs, and letterings. This designer will grab your attention and hold it! 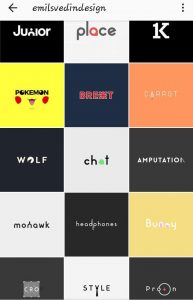 Another designer with a minimalistic approach to designing, Emil is a hidden jewel.  Although he hasn’t posted much, his posts are worth taking note of and certainly deserve taking inspiration from. Originality echoes in his work. He is surely a great designer in the making. 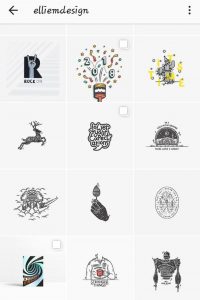 Carefully and neatly crafted, the aesthetically pleasing feed of Ellie is one-of-its-kind. The designs are not loud or overbearing but are nonetheless powerful in their presence. Although most of her illustrations are black and white, you can’t say they lack creativity. Simple yet elegant is what her designs are all about and we aren’t complaining! 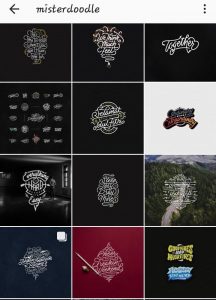 Based in Indonesia, this graphic designer specializes in hand lettering. Each of his posts is a unique and beautiful combination of simplicity, authenticity and sophistication. Looking at this artist’s Instagram feed would surely inspire you to let your creative juices flowing. Most of the posts are client work and his passion is evident through his work and how! 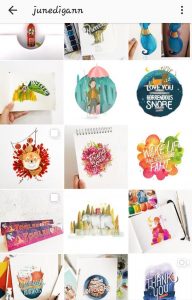 Based in the Philippines and focused on illustrations and lettering, this graphic designer’s forte is watercolour painting and the feed is simply amazing with creativity to abound. It is quite refreshing to see someone be able to create magic with plain watercolours even while many graphic designers today are opting for more technologically advanced ways.

Entrepreneurship Is Not The Preserve of Big Metros Alone: Pragati Srivastava