1st December is World AIDS Day. Let's try and deconstruct our cruel and vindictive behaviour towards those who are infected by HIV and continue to suffer in silence.

1st December is World AIDS Day. Let’s try and deconstruct our cruel and vindictive behaviour towards those who are infected by HIV and continue to suffer in silence.

Although knowledge about this disease is extremely important, what’s more fundamental is to know how unkind and insensitive we are to those that undergo this trauma and how we try our very best to make their life a living hell when all that want is our compassion.

In 2019, AIDS is no longer the death sentence it used to be, but often our ignorance of the disease and social stigma can prove to be more than those who suffer can handle.

Time we change this.

I remember that during my college days, many of us used to tease each other by wishing them ‘Happy AIDS Day’, and insinuating that AIDS is a ‘Gupt Rog’ (a secretive disease that we are supposed to be ashamed of), thus implying that sex (that was not openly spoken about) is the only way through which we can get AIDS.

Not only that, we were trivialising and mocking a very serious disease – can we do the same with cancer or thalassemia?

At a time like this when they need our support, we decide to shame them as if they have committed some sacrilege. For some reason we think that we have the right to write an essay on their character every time we see them, and feel entitled to be a total jackass to someone just because they have AIDS.

Do we need to kick someone when they are down?

Regardless of the reasons for someone being inflicted with the disease, it can be a very traumatic experience for that individual and their family. It is not easy to live with this realisation that you may lose your life because of it. And the myths surrounding AIDS makes the whole situation even more difficult.

We tolerate and in some cases worship politicians and godmen accused of terror attacks, rape, murder, corruption but we are two-faced enough to ambush someone who is HIV positive because we think that the only way you can get that virus in your system is through sex, and sex is supposed to be ‘immoral’ outside of matrimony (although sex without consent i.e. rape is perfectly moral in our dictionary).

It is a known fact that someone can become HIV Positive for a multitude of reasons which also includes unprotected sex, but we have no business assuming we know it and targeting someone with our morality.

First, those who are in high risk professions like doctors, nurses, and other health workers, who can get the virus by being injured by infected needles, etc., or where proper care is not taken with equipment.

There are a number of women who unwittingly get infected through their husbands, especially those who visit brothels regularly or people whose occupation involves movement from one place to another very frequently like labourers or truckers. The risk is multiplied since even today many husbands insist on not using protection, which puts their wives at a huge risk. And these women have almost no help from the outside world and are often left to rot on their own – social stigma that specifically targets women being a big factor.

And let’s not even talk about the plight of the sex workers. As if being trafficked illegally and working in squalid, inhumane conditions for a pittance was not enough, they also have to worry about working without protection in most cases (because their clients don’t want to) and face even more stigma when they seek healthcare. Some NGOs do help them but it is clearly not enough as they face multitude of health problems and are often left to suffer in silence.

And of course, there are the babies who can get infected during the delivery if the mother is infected.

HIV is not just about sex

Or must have done drugs because apparently only those who use syringes for consuming a drug can get infected by HIV, and everything else about faulty syringes being the cause of this disease is just a rumour (it might sound stupid but a lot of people see this as the truth).

Our hypocrisy is brought out in the open when we don’t show the same reprehensible treatment for someone who has clogged their arteries due to eating excessively unhealthy food, or someone whose liver is damaged beyond repair because of overconsumption of alcohol. Why is our insensitivity only reserved for those with HIV?

Our prejudice is affecting their lives

Our generation has also circulated a lot of rumours and peddled erroneous beliefs which has made the problem even more serious, society is guilty of maligning their reputation several times just to satisfy our massive egos. I have also heard of a number of instances where people who might have contacted HIV through syringe or any other non sexual way also being ostracised by society saying “That person is trying to save his reputation by using syringe as an excuse while the reality is that he/she would have gotten HIV only through sex”!

We need to ask ourselves if this is fair, and if we have any business judging others, and call out such shockingly abhorrent behaviour.

According to recent reports, India has the third largest number of people who are living with HIV (which is not the same as AIDS). 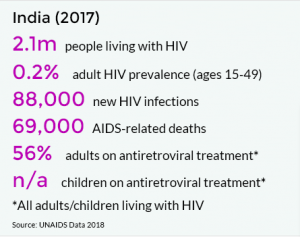 For ages, we have been told that HIV = Death which is not entirely true. Breakthroughs are being made and we may be able to prevent people from dying from this epidemic.

But while the search for a cure goes on, we can make a sincere attempt to actually understand what these patients are going through on a daily basis.

Can we be more empathetic towards them?

To be honest I do not know what I would do if I ever get the news that I am HIV Positive. The first time I saw ‘Phir Milenge‘ in 2004 I didn’t know how to react to it. It was heartbreaking to see the discrimination and trauma that both Tamanna (played by Shilpa Shetty) and Rohit (played by Salman Khan) had to go through.

Watching that movie brought home the reality that my life can come to an end just like that and there is nothing that I could do about it.

Maybe that is the reason why I still have not gotten myself tested for HIV. To be honest I do not know what I may end up doing if I ever find out that I have the disease. I may abandon civilization for some time (or that others would abandon me) and I might spend a lot of time dealing with the whole thing but I will not quit on myself.

Because it is extremely important to support yourself during a time when no one else would. And that doing so will not be easy when your life is turned upside down just because of a virus.

Act now before it is too late

We need to end this discrimination and realize that just like cancer, HIV infection can happen to any one of us, and not having sex or taking all sorts of precautions does not guarantee you an AIDS-free life.

We need to understand that people with this disease are still people and touching, hugging, sharing food with them does not make you vulnerable to the virus.

We fail to realize that anyone with HIV/AIDS can contribute to our society as much as we do and maybe more. What happened with them was unfortunate, but we can’t use that as an excuse to treat them like shit anymore.