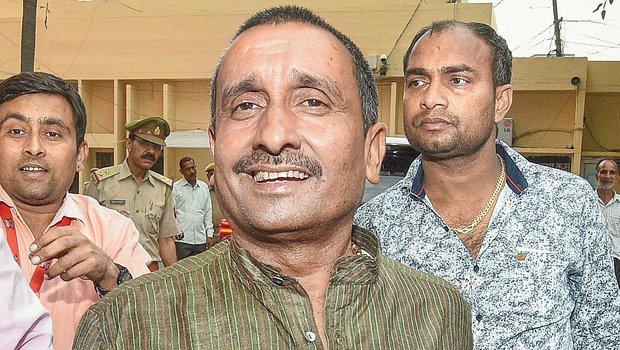 Ex-BJP MLA Kuldeep Sengar was convicted and sentenced to life imprisonment in the 2017 Unnao rape case today. However, is this going to stop the ‘strong and powerful’ from getting away?

Update: A Delhi Court has sentenced former BJP MLA Kuldeep Singh Sengar to life imprisonment in the 2017 Unnao rape case. According to reports the court has also imposed a fine of Rs. 25 lakhs on him along with a Rs. 10 lakh compensation to the victim and her mother.

Expelled BJP MLA Kuldeep Sengar has been convicted in the Unnao rape case by a District Court in Delhi earlier today. However, one of the co-accused Shashi Singh was acquitted. The sentencing in this case is scheduled for today (17th December), the maximum quantum of punishment possible being life imprisonment.

Judge Dharmesh Sharma praised the rape survivor in the verdict for “fighting against a powerful person.” He also slammed the array of false cases against her family members. These were allegedly orchestrated by Sengar while he was in jail awaiting trial.

Sengar has been a powerful local politician, four time BJP MLA and was belatedly ousted by the party after public outrage about this horrific case as the survivor was a minor when the crime happened.

Saga of society and institutions as oppressors

The judgement itself speaks a lot about how the society and family did not facilitate the survivor. Instead they only became a hurdle in her fight for justice.

“…. this investigation has suffered from patriarchal approach or inherent outlook to brush the issue of sexual violence against the children under the carpet… apart from exhibiting lack of sensitivity and humane approach…”

The court said that even CBI faltered in doing their duty. Witness statements and CDRs were leaked to weaken the girl’s case, the charge sheet was delayed by a year and they did not even examine the accused’s phones.

The issue would have buried like thousands of other such horrendous crimes had the girl not been brave enough to speak publicly about it. Especially after her father was beaten up by Sengar’s brother. Her father was later allegedly framed in an illegal arms case and arrested. He eventually died in judicial custody on April 9, 2019.

Earlier this year she wrote to the Supreme Court alleging that there was grave danger to her life and those of her family members supporting her. In July when she was travelling with her advocate and two aunts, their car was hit by a speeding truck conspicuously with blackened number plates.

Both her aunts, one of whom was also a witness to the rape – died in the accident. The girl was grievously injured and was in recovery till September in a hospital in Delhi.

The girl’s parents were employed by Sengar. When she reported the incident to her mother, she was allegedly asked to remain quiet for fear of the “rich and powerful” accused. And subsequently, according to her the abuse continued.

Justice is a long road

PM Modi launched Beti Bachao Beti Padhao (BBBP) on 22nd January, 2015 at Panipat, Haryana during his first tenure as the prime minister. The scheme was aimed to address issues like declining Child Sex Ratio (CSR) and related issues of women empowerment over a life-cycle continuum. It is ironic that since the launch, crimes against women have seen a steep rise all over the country.

Women, particularly minors, like the survivor in this case (and children who are the most vulnerable group as far as sexual violence is concerned) have faced some brutal crimes against them since then. The Kathua case and the recent Disha case being prime examples of the same

According to the latest NCRB data crime against women is on the rise and Uttar Pradesh is one of the major culprits. This data is crucial as it is a reflection that the safety of women is a grey area.

However, the larger problem is the society’s apathy towards survivors. The victim-blaming and the flaws in the law enforcement procedures that provide no solace to victims/survivors.

It is a good sign that on the seventh anniversary of the most talked about Nirbhaya case the judicial system had served some justice. Though the convicts from this 2012 case still stay in jail awaiting the execution of their death sentence.

Justice deferred, diluted and so many times even declined is still the fate of most cases. Hope it changes and soon.