Recent violence on students of Jamia Milia University had many female students being allegedly brutalised by Delhi Police. Is this supposed to be a democracy with no space for dissent?

A protest that was supposed to be a peaceful protest by the students of Delhi’s Jamia Millia Islamia University against the Citizenship Amendment Bill turned violent on Sunday evening. This resulted in a violent clash between the students and the Delhi Police.

Horrifying images and videos of brutality on students of Jamia by Delhi Police are circulating all around the internet. Videos of firing, reckless lathi-charge, dragging female students out of the college without the presence of any female official are all raising many questions about this act of police.

Students are alleging that the Delhi Police officials got into the campus forcefully and used brutality on students that were protesting and even the ones that weren’t. Students were asked to hold their hands up and vacate the campus. They claim that they were ‘treated like criminals’. Whereas the sides supporting the police are saying that the ‘Jihadis of Jamia’ provoked the police to take such action by stone pelting and injuring the police officials.

All of this raises one question – that no matter what or who started it, is beating up students so inhumanly and treating them as criminals, even manhandling female students in the way that is alleged, the principle of democracy?

They also claimed that police personnel pushed female students and no women officials were present. (As published in a report by India Today).

Although the police officials are claiming that they didn’t do any firing but the viral videos are giving a completely different story. Reports claim that almost 40 people, including students, policemen and firemen were injured in this violent act during the protest.

Just after the news of police brutality in Jamia went viral, students from various parts of the country did solidarity March in support of students of Jamia.

It started with Aligarh Muslim University where around 60 AMU Students got Injured in Police Violence and orders were released to close the University till January 5. Marches in many other universities like IIT Bombay, Benaras Hindu University, Varanasi and Maulana Aazad University, in Hyderabad too happened in support of the students of Jamia.

Apart from that, students majorly from Jamia Milia and JNU gathered around Delhi Police headquarters at ITO to protest against the police action. After which at around 3.30 am on Monday nearly 100 students who were detained by the police were released. (As reported by NDTV)

The Vice-Chancellor of Jamia Najma Akhtar has condemned the violence and has demanded high-level inquiry on the issue. She has also said that they will be firing FIR against the police officials. “Don’t target Jamia and malign its students. You can rebuild the property but you cannot compensate for the things the students went through,” she said.

The voice of dissent and the Sheroes of the protest

This entire issue makes us question the fact that is suppressing the voice of dissent the fundamentals of Democracy?

There are videos circulated where we see women students of Jamia claiming that the police officials got into their hostels and even sexually assaulted them. According to them they were dragged and beaten up without the presence of any female police official.

Recently an image of three women standing on a wall while addressing a huge crowd during a protest organised by Jamia Students on Friday went viral. 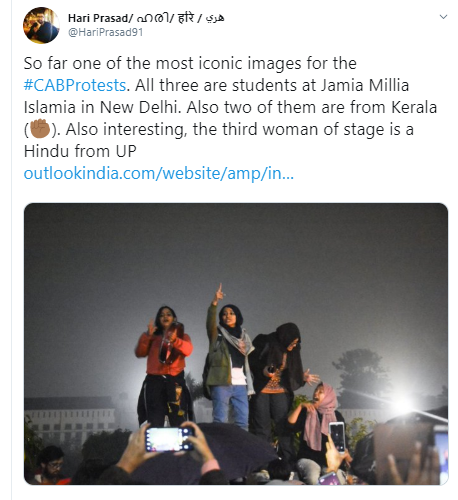 Even the women who protected their male friend during the protest are sending a message to many other women. We also saw interviews of female students crying, frightened and scared because of how they and their friends were treated yesterday. A woman journalist was pulled, beaten and threatened because she was covering the violence.

It takes exceptional courage for girls to join the protest, knowing that they will be often treated worse than their male counterparts. Shame on the Delhi police for this behaviour, especially since these were largely peaceful protests. Treating any voice of dissent with such inhumane force is not what should happen in the world’s largest democracy.

Women – you are not weak – raise your voices

All of this makes us feel empowered to raise our voice despite the worst of consequences. Women becoming the face of the protest in Jamia give a message that whenever you see injustice speak up because no one can take our voices.

This makes us realize that women have known the art of protest, having constantly taken to the streets throughout history when it came to defending their rights. Be it the suffragette movement or women’s right to education and equal pay as well as safety, women are no strangers to protest.

In the end, we all must know one thing that even if some elements turned the protest violent, even if students of Jamia did pelt stones or as people are saying ‘provoked’ the police even if they started it, this is not about who started what. It’s about the fact that violence is not the answer to anything in a civilised society. Also, in the end, students are just students and thrashing students, beating them up, firing on them, misbehaving with female students, treating students as criminals just because they tried to raise a voice of dissent and even the police getting injured is not what the morals of democracy preach. Period!