Eve Ensler recently released her new book The Apology in Delhi. In a press meeting, she describes why she wrote the book and the excruciating experience that it was

Eve Ensler recently released her new book The Apology in Delhi. In a press meeting, she describes why she wrote the book and the excruciating experience that it was

On November 11, I had the wonderful opportunity of meeting renowned author and feminist activist Eve Ensler at a press meeting in Delhi. She was in town for the India and Delhi chapters of One Billion Rising (OBR)- a global campaign that she founded to end rape and sexual violence against women. The author of the celebrated play Vagina Monologues discussed her latest book, The Apology. Indian feminist activists Kamla Bhasin and Abha Bhaiya also attended the meeting.

The first thing that I felt when I looked into Eve’s twinkling eyes is that she sees me. It was, as if, for her, YOU are important.

She offers you the most genuine smile while holding your gaze with those kind, intelligent eyes. And throughout the time we spent with her, I felt that my first impression wasn’t quite wrong.

Eve talks about abuse, climate change, the mass devastation of Mother Earth, and the culture of toxic masculinity. And yet, in all of that she never loses her compassion. She is angry but she is not baying for someone’s blood. In fact, she is asking for real changes that come when people look inside themselves.

Imagine meeting your feminist icon and then being awestruck by her kindness and inner beauty more than you’d ever expected? Eve Ensler had my heart.

Why Eve wrote The Apology

Eve was sexually abused by her father from ages five to ten. And when she resisted, he feared being discovered by the family, he started physically assaulting her to the point of almost murdering her twice. Despite all this, Eve secretly believed that after she grew up, her father would one day say that he was sorry. She secretly waited for his mail even 31 years after he passed away. And since that much awaited apology never arrived, Eve decided to write one for herself.

Another reason that spurred her into writing this book was that in her twenty five years of working with women’s movements worldwide, (while she’d witness women breaking their silence and coming forward to tell their stories,) she’d never heard a single man make a public apology for sexual abuse, for incest, or domestic battery. While she applauds the #MeToo movement for what it has achieved, she still thinks we’re stuck somewhere.

The book as a template to free the victims

She thinks that the current environment is one where men are on their guard—they don’t know what to do, and yet, they are not changing. Eve believes that unless men take this opportunity to do some self-interrogation, see where the root of their behaviour lies and the impact of their behaviour on their victims, we’re going to be stuck here for the rest of time that we have left on this planet.

So, she thought of creating a template or a blueprint that other men might look at as a possible way to begin to free their victims (as well as himself) of their terrible deeds.

The anatomy of an apology

Eve says that writing the book helped her understand the anatomy of an apology. It is not merely a, “Sorry, I abused you.” This, she thinks, is not really an apology but is rather a write-off.

According to Eve, an apology has four parts:

Writing the book was excruciating

Eve says that writing The Apology had been an excruciating process for her. She felt her father’s pain through the process of writing this book, something that she hadn’t intended to, when she set out.

The book was also an explanation

By writing this book, she allowed herself to understand what made her father the way he was. The book is not a justification for his deeds, rather an explanation. She wanted her father to explain to her what as a child happened to him, what did he go through that turned him into the kind of man who was able to incest his daughter and then radically abuse her.

Eve says that by allowing herself to hear that was hugely liberating for her because when the book began her father was this monster but by the end, he was this apologist. From a terrifying entity in the beginning, her father became this broken little boy.

In a sense, he lost his agency over Eve. “The imagination is so powerful. It’s our superpower. I made up my father’s voice, I made up a lot of his story but the process of doing that in the end was an incredibly liberating experience.”

Survivors being asked to forgive perpetrators

Eve feels that forgiveness is a mandated word, particularly for victims, it is religious and artificial. She rather believes in the alchemy of an apology. If one truly, deeply goes through the process as she had outlined in the book (and do some serious soul searching and the work she talked about) then they might get a relief from their rancour and bitterness, she says.

But she doesn’t think the onus is ever on the victim to forgive. If they don’t want to forgive, they don’t have to.

Men also are devastated by patriarchy

Eve doesn’t believe that men are born monsters, rather, she thinks that we all grew up within the same tyranny of patriarchy. And that’s what is  destroying all of us.

When men are told not to cry, not to feel, to cut off their hearts and put into a position of power and privilege, that becomes a devastating coagulation. And that often turns into aggression and violence.

She says, “Maybe, if we become more vocal about childhood trauma and abuse of boy children and how they’re trained in the culture of toxic masculinity, we might find that boys are actually more fragile than girls. Men have been as poisoned and as devastated by patriarchy as women have. It is now they have to own that and begin to reverse that paradigm.”

Eve states that the book has so far shown some hopeful changes. She’d been receiving letters of apology from men on The Apology website. Some men came up to her after her talks and said that they didn’t understand that what they were doing was wrong.

“If men’s hearts are cauterised and they feel no compassion how would they understand things like consent or feel any sympathy for their victims?” she asks.

“How do we wake up our hearts? This book is an offering… Men need to ask, ‘Are we going to go down without making the apology, holding our power and privilege and not showing our weakness, or are we going to get out here and open our hearts and begin to be part of a process of cooperation and love and healing so we can figure out how we can keep humanity alive on the planet?’” 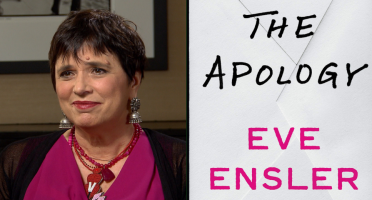 Imagine How Cathartic A Real, Heartfelt Apology From An Abuser Would Feel...