Journalist Posts Twitter Thread With 7 Tips On Self Defence, After She Had A Narrow Escape

Journalist Anubhuti Vishnoi posted a twitter thread yesterday after a narrow escape from what could have become a horrific sexual assault, highlighting the importance of alertness and self defence.

Journalist Anubhuti Vishnoi posted a twitter thread yesterday after a narrow escape from what could have become a horrific sexual assault, highlighting the importance of alertness and self defence.

When will the women in Delhi be safe? Will women will ever be able to roam around in Delhi without being molested? When will crime against women in Delhi stop? These are some of the questions that surface every time a molestation issue is highlighted.

One such incident that could easily have become one of the horrific statistics in the city was narrated by journalist Anubhuti Vishnoi on twitter.

A narrow escape from a bigger crime

On Wednesday Anubhuti put up a twitter thread mentioning her escape from an incident that could turn into a bigger crime.

Writing this because it rattled me and hit home just how vulnerable a woman can be within seconds of stepping out of office/home and how she can never let down her guard. https://t.co/qF8bb4k4KK

“I step out of the office and I am at the stairs outside the building when a young-looking man comes up to me and asks me to give him some food to eat. Purely by instinct and thinking that he is fit enough to find work, I chose to ignore him and walk away,” her tweet read.

However, this very regular instinct then turned into something extremely scary. In the thread, she mentioned that because of her hands being occupied, she didn’t notice the man following her on her way to her car in the parking area.

As soon as she got into the car, she saw the man standing right next to driver’s side window. What happened next was beyond imagination.

The man started knocking at the window and even unzipped himself. She panicked and started her car to escape the scene.

Luckily she was fast enough to start the car and she managed to drive away. But this entire incident made her realise that “sometimes there is not even time to pull out your pepper spray or your phone from the bag to make that SOS call.”

After realising that such incidents can happen to anyone, Anubhuti listed the basic self-defence techniques that everyone should be aware of. She listed them in the thread. 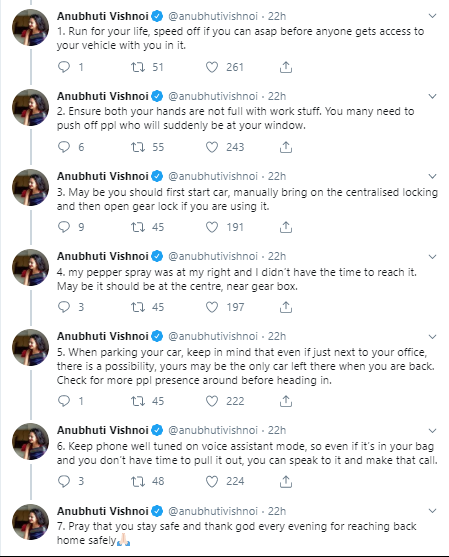 Where is the safety?

Anubhuti’s story was horrifying. But what followed in the comments on the thread was even worse. Similar stories about possibly the same man, doing the same to more women.

Anubhuti, same guy (or so I presume) approached me as I stepped out of building at around 7pm. I ignored and luckily my car was right there, so I quickly got in

Now the question is that if there is a possibility of the same man molesting women, then why there hasn’t been any action taken?

Anubhuti mentioned that her office is half km from the Delhi Police Headquarters yet there was no presence of a beat constable or police patrol in the vicinity.

Women’s safety in Delhi-NCR has been an issue plaguing the national capital for years now. Over the years, CCTV cameras have been installed across the city, but, reports say, most of them don’t work.

Cameras don’t work properly, police patrolling is not there even at places half a kilometre away from the Police Headquarters. In a city which has seen the most gruesome rape cases ever women still don’t have the basic security measures.

Indeed the best way to prevent crime is to be self-aware and defend yourself but still, the big question is when will women safety be considered a matter of serious attention by the authorities in Delhi? This very thread raises this question and it is something that we need to work on right now.