Sometimes We Learn It The Hard Way…

Tamanna kept looking at her mobile phone’s screen which displayed the Whatsapp message from Kartik saying, “I am leaving alone for this journey from where I am destined to return with my soulmate, with you love of my life. . . .”

Reading it for the twentieth time her eyes got blurred with the sentiments. As her mother admires her as a bride clad in her bridal attire and muses at her eyes filled with tears, Tamanna extends her phone towards her. After reading the text she got into the same emotions as her daughter and kissed her on the forehead in joy and blessing.

As she had to look at the arrangements, Tamanna was left alone with her overwhelming emotions and memories of the past three years. She closed her eyes and the last three years of her life came drifting back.

She saw herself sitting curled up on the sofa with the tears rolling from her eyes and body shaking with shock. Though she was surrounded by her family which pampered her being the only daughter but today no one moved to calm her down but stared at her helplessly with blank expressions on their faces. Her father looked shattered and tired, mother in shock as well, brothers angry but ignorant to her tears.

The ignorance of her family was more painful and hurting for her than the backstab given by her fiance who was her lover and in relationship with her for five years and to whom she was getting married after two days.
She and her family came to know that the guy was already married and had a child also. The news was from a reliable source so there was no question of cross-checking. The family never tried to investigate the authenticity of guy as it was apparently a love marriage for which they didn’t approve at first but Tamanna convinced them with her efforts of four years and now when they were convinced and set it with all preparations and distributed the wedding invitations, this news came as a blow to everyone.

Tamanna was shattered and crying in grief and looked as if gone blank with shock. She expected someone to say something, scold her, beat her, talk about their fears…but all she got was the ignorance of everyone.

She thought about things which she had to face during the time she took to convince his family, the lost trust of her father, name-calling by her mother and questioning eyes of brothers every time she stepped out of the house. Now, what would happen to her and her family’s reputation? She even thought to end her life at first chance she gets.

However, understanding a woman’s emotions, her mother came up to her and said, “I never liked that rascal but you were not ready to listen beta. It is good we got rid of him. Not at all a match for you.”

After hearing such words from her mother, Tamanna’s guilt started reducing. In spite of knowing that her family would have to face the humiliation in society, she derived the courage to face life.

An entire year after this incident was extremely depressing. She cut herself from the outer world and stopped stepping out of the house. But slowly with family’s support, she started getting a life. She groomed herself and worked hard to get her confidence back. And today she was getting married to Kartik whom she found totally worth marrying and accepting as her life partner.

Tamanna woke up from her thoughts at the sound of opening of the door as her mother came back to escort her to the ceremony hall. She got up to glance at herself in the mirror with her mother behind smiling. Suddenly the lines from a famous poet flash in her mind who said
“You wait, longing to hear
Words of reason, love or play
To lash or lull you towards the hollow day” 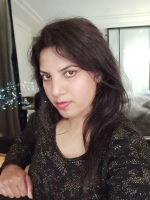 Love to read, write and think...