Female Doc Attacked Inside Her Hostel: Tell Us Again Where Women Are Safe?

An intruder broke into the girl's hostel of Gandhi Medical College in Bhopal and robbed and molested a student, and despite complaints, the authorities and police were slow to act, even blaming the victim for this.

An intruder broke into the girl’s hostel of Gandhi Medical College in Bhopal and robbed and molested a student, and despite complaints, the authorities and police were slow to act, even blaming the victim for this.

According to reports from Gandhi Medical College in Bhopal, a female medical student was molested by an intruder in the early hours on Saturday morning, and also escaped with a few smartphones and Rs. 15000 in cash.

He had come in with an intention to loot and he might have succeeded in his attempt to rape her as well, were it not for her bravery and presence of mind to kick him and snatch the screwdriver that he was threatening to dig into her neck, and then scream for help, which made the intruder run away in panic.

The incident highlights the abysmal state of security measures for these students who are a future generation of women doctors, doctors who work day and night to save our lives. And this is not the first such incident of a break-in at hostels, even those leading to molestation. Do we have to wait for someone to get raped or killed to wake up from our slumber and then talk about ensure their safety?

Shockingly, this was not the first attempt of theft in this hostel. Students have said that there have been nine previous cases of burglary in there.

For reasons known only to the police, they first filed a case only for theft in spite of the girl insisting that she was molested. They later added charges of loot and molestation. She has also been subject to theft before, but the police had not registered a case then.

We spoke to a student (whose details we cannot reveal for her own privacy and safety) about the incident.

According to her, “Everyone is trying to push things under the carpet. Students had to file the FIR on their own with no support from the college. The college administration is being vindictive instead of finding solutions, and is trying to blame the girl who was subjected to molestation by saying that she knew the intruder when there is no such proof.”

She also mentioned that the Dean and Warden were informed of the incident immediately, but they did not arrive in the college till late in the morning and did not take the necessary action. However since we do not have the administration’s side of the story on these events, it would be harsh to arrive at any judgement without proof.

Since the hostel is near the hospital which means that there are virtually no restrictions neither are there any proper boundary walls and since there have been so many incidents till now tells us that is it not difficult to break into a room without having to enter the hostel from a particular entry/exit point which is exactly what the intruder did.

Videos of students protesting against the inaction and lax attitude of the administration have been circulating in the social media but till now there have been no concrete steps taken by the college. 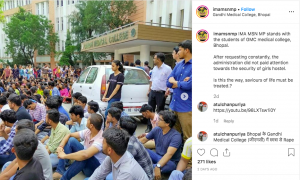 The fact that there have been so many break-ins earlier too, highlights the fact that the college authorities have failed to arrange for proper security. Colleges should be equipped with the necessary security features, and the it reflects very poorly on the administration as well as the government agencies overseeing colleges like this.

A quick fix solution like “restrict the movement of women students” is extremely convenient to these authorities, because it puts the onus of the incident on the students, but as long as we don’t address the problem by making these places safer for them we will not change a thing.

Ideally, the administration should take measures like installing CCTV cameras at the entrance and exit points in the hostels along with keeping strict records and having people for 24*7 surveillance, while directing the wardens to coordinate with and help the students in filing reports of such incidents. Still, the students should not lose hope, while at the same time continue to protest and raise the issue as much as they can, and for the government to take some proactive action.

The situation cannot be dealt with by the usual sexist victim shaming to deflect responsibility by saying things like ‘Girls have a habit of overreacting’, ‘She is making a big issue out of nothing’, ‘She just wants some attention’, ‘Why the hell was she out so late in the night?’.

As a society, we can’t afford our future generation to adopt the mindset of ‘Sab chalta hai’ (Everything goes) when it comes to violating the security, and compromising with the safety of women.

Update: According to the latest report in Dainik Bhaskar’s Bhopal edition on the 8th of October, a liftman working in Kamala Nehru Hospital (located in the college premises) has been identified by the girl as the intruder, and has been taken into police custody. 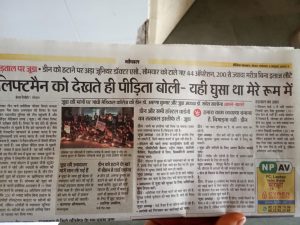 Whether the liftman is the culprit or not, this also underlines a need for conducting proper background checks for every employee working either in the college hostel or in any of the adjoining hospitals that lie within the college campus.