Many are celebrating that Asterix finally has a female 'hero', Adrenaline, but others have pointed out that just having a female 'hero' is not quite enough - the why and how of her representation is equally important.

Many are celebrating that Asterix finally has a female ‘hero’, Adrenaline, but others have pointed out that just having a female ‘hero’ is not quite enough – the why and how of her representation is equally important.

Asterix and Obelix have been beloved by readers around the world for sixty years now. In its 38th album, the celebrated French comic book finally has a ‘female hero’.

Adrenaline, who appears as the teenage daughter of Vercingetorix, the Gallic King, appeared in the album titled Asterix and the Chieftain’s Daughter, released on Thursday, October 24th, 2019.

The comic has been written by Jean-Yves Ferri and drawn by Didier Conrad, and has stayed true to the original format started by writer Rene Goscinny and cartoonist Albert Uderzo.

Meet Adrenaline! The first female hero to join the world of Asterix and Obelix, a Chieftan's daughter who will ensure things will never be quite the same again…https://t.co/vgugu3quJ5 pic.twitter.com/eIRLXTqIOf

The move is largely being hailed as a positive one, considering that earlier female characters in the comics were depicted either as seductresses (Panacea, Mrs Geriatrix, Cleopatra) or shrews (Impedimenta). Asterix and the Secret Weapon even took pot shots at feminism, implying that the ‘liberation’ women yearn for is clothes and makeup.

Given this history, Adrenaline’s positioning as a rebellious teenager, who keeps Asterix and Obelix on their toes, is being seen as a welcome change.

“We didn’t want to develop a character who would be based on her seductive side as we usually do with female characters in Asterix. Most of the time they are young attractive women who seduce Obelix and their role stops there,” said Conrad.

As a favorite comic to read growing up this is a great step forward in character development and representation https://t.co/8xEnZ7xLBZ

Tomorrow marks the 60th Anniversary of the iconic cult French comic, Asterix. What better way to celebrate than the introduction of their first female star. Welcome to the spotlight our sassy little sister, Adrenaline. pic.twitter.com/V22G91eW56

Our very own Amul too, heralded the arrival of Adrenaline with an ad that shows her eating a piece of bread slathered with Amul butter by Asterix, even as the Amul girl braids her hair.

Our take on the comic series getting its first female hero in 60 years! pic.twitter.com/XuxAAJ0Rnx

But is it all good?

Adrenaline’s age, hairstyle, determined expression, and the assurance that “things will never be quite the same again” have drawn comparisons to Greta Thunberg, the climate change activist, who called world leaders to attention recently. However, according to Ferri and Conrad, the similarities are purely coincidental.

Others, however, have pointed out that not everything is as rosy as it looks, and that the portrayal of Adrenaline leaves much to be desired.

The criticism mainly revolves around the point that to become a protagonist, Adrenaline has to give up her ‘femininity’, thus perpetuating stereotypes that women who are ‘feminine’ are weak and dependent.

“[She] has just finished growing, but hasn’t fully developed yet, so everything that is feminine is focused on her face,” said Conrad about Adrenaline, leading others to question if ‘fully developed’ women deserve to be focused on only in a sexual way.

Beauty and sexuality have often been used to discount and distract from a woman’s accomplishments, as this discussion about Cleopatra goes to show. 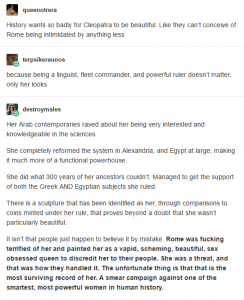 But women can be conventionally attractive, and be strong, and have leadership qualities and be rebellious. Therefore, by depicting Adrenaline as a girl who is not fully ‘feminine’, the comic has in fact fallen for a Feminism Lite trap.

There is also the fact that as per what is known of the comic currently, it is about Asterix and Obelix ‘protecting’ Adrenaline from the Romans, leading people to wonder if after all the hue and cry, it is ultimately just another ‘male saviour’ narrative.

The introduction of Adrenaline goes to show two things.

Firstly, that people want to see better representation in pop culture. One hopes that this response to Adrenaline encourages the writers to add more characters from other marginalized groups in the future.

(Author’s note: This writer of this post has not read Asterix and the Chieftain’s Daughter yet as it has just been published, and so is not aware of what the actual storyline is. The ‘male saviour’ narrative has been mentioned only because she has read others wondering if it is one. If you have read the comic and can say for sure that Adrenaline is a ‘hero’ in every sense of the term, please let us know and we shall update the post accordingly).

Register at Women's Web to get our weekly mailer and never miss out on our events, contests & best reads - you can also start sharing your own ideas and experiences with thousands of other women here!
booksrepresentation