The Kechak – A Symphony Of Seductive Movements

Most of us, in our childhood and particularly People residing in North India must have at one time or another seen the Ramleela performance. And, NO! I am not talking about Sanjay Leela Bhansali’s iconic celluloid dramatization – Ramleela. I am talking about the actual dance drama event that takes place in cities and mostly in villages/rural areas of India, right around Dusshera & Diwali. Even if someone has never witnessed the performance, they would know the story of Ramayana – The epic saga of a prince exiled to the forest at the whim of his Step mother and his journey to Lanka to reclaim back his abducted wife. Indeed, the Ramayana is a tale that all Indian’s are conversant with. 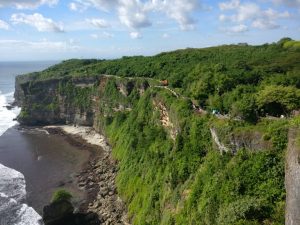 But, did you know that there is yet another country, a tiny one, in South East Asia that does an equally beautiful depiction of this dance drama? This country shares its cultural roots with India and revere many of the same Hindu God’s that we do. The tale of the Ramayana is so deeply entrenched in the traditional fabric of this country that a performance against the setting sun on the cliff tops is a mesmerizing indulgence. I am talking about the beautiful country of Indonesia and the iconic kechak dance/fire dance performance enacted on the island of Bali. 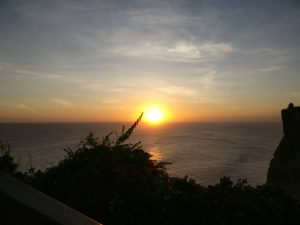 For those of you who are unfamiliar with this dance form, it is a form of Balinese hindu dance, accompanied by a musical drama that was developed in Bali, Indonesia. If you are planning a visit to Bali then your visit would most definitely not be complete if you miss this traditional performance. Enacted against the backdrop of the setting sun, in an arena on the cliff top of the Ulwatu Temple, this dance begins as the sun begins its downward descent into the Indian Ocean (be sure to grab an early seat!). The drama is performed in an open theatre quite similar to the old roman arenas. The arena has a tiered seating system with a sunken central pit in which the dancers perform. You can also catch a performance at the Tanah Lot temple or other cultural arenas, in case you are not visiting Ulwatu.

I happened to catch the performance at the Ulwatu temple. There is a nominal charge that the temple collects from visitors when you enter the Ulwatu premises. This includes charges for the obligatory Dhoti that you have to wear when you enter the temple. The Kechak fee is however separate and there is a counter in the Ulwatu temple premises from where tickets can be purchased (it is near the arena). The Ulwatu temple itself is also very beautiful. Perched atop jagged cliffs overlooking onto a pristine beach that abuts the Indian Ocean, this temple pays obeisance to lord Rudra. The entire premises are teeming with rather mischievous and aggressive monkey’s that are notorious for snatching away the belongings of visitors. So, beware! 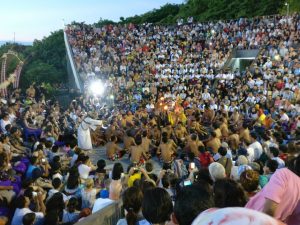 So, what actually is the Kechak dance?

The Kechak dance comprises of a troupe of around 50-100 male dancers who wear waistcloths/ loincloths and are bare-chested. As they enter the area to the resounding chants of “Chak! Chak! Chak!”, they form rows of circles in the middle of which is the traditional Balinese oil lamp that is lit for the performance (this is also the reason why the dance is called the fire dance). Coincidently this ritual is quite similar to the Indian tradition of lighting an oil lamp before beginning any dance performance/stage performance. Once the circles are complete, the performers sway to the beats, their frenzied chanting reaching a crescendo accompanied by the trembling of hands that are lifted heavenward. This continues for about 15 or so minutes. After this starts the actual enactment of the Ramayana. Dancers dressed as Ram, Sita, Laxmana, Jatayu, Hanuman etc make their entry to enact out the role that they play in the saga. 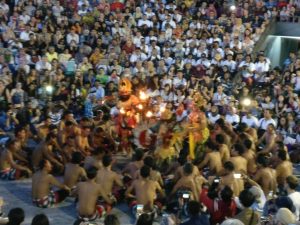 What is particularly enchanting is the lead dance pair of Ram and Sita. Dressed in traditional Balinese attire, these graceful performers gyrate to the melodious music. Their undulating motion is in perfect synchronicity as they weave their way through the troupe of dancers. Never once touching and yet giving the impression of being closely connected, they enchant with their movements and gestures. Their costumes and getup further adds to the allure.

The duration of the performance is usually an hour to an hour and a half max and it is mostly held at sundown. The performance depicts the story of the Ramayana from the point where Ram and Sita are exiled to the jungles of Dandaka and from wherein Ravana abducts Sita, post the appearance of the Golden Deer. The drama unfolds further with the battle between Jatayu and Ravana when he is fleeing with Sita. It then shifts to the part where Hanuman ventures into Lanka to search for Sita and finally culminates in the epic battle between Ram and Ravana in which Ravana is vanquished. During this entire phase the cynosure of the performance are the main leads playing Ram, Sita, Jatayu, Laxmana and Hanuman. Hanuman is an absolute delight to watch. His entry in the play is quite impromptu (from the guest stands, no less!). He regales the crowd with his antics and his entry is usually followed by bouts of levity & mirth.

The entire experience of watching the Kechak is quite different from the Ramleela that we watch in India. To summarize I would say that the Kechak is a more sensuous depiction of the epic tale. It seduces you and transports you to a world in which you are left awed.

Blending In – The Mauritian Potpourri