4 Alpha Girls Who’re Trailblazers From Silicon Valley, And An Inspiration For All Career Woman

Alpha Girls: The Women Upstarts Who Took on Silicon Valley’s Male Culture and Made the Deals Of A Lifetime by Julian Guthrie is a book about the stories of four women trailblazers of Silicon Valley. She calls them ‘women upstarts’, a term used derogatorily for alpha women, but which has been owned by these amazing women.

These astounding women made their mark in the highly competitive and male-dominated Tech and Venture Capital industries. They rose above biases, prejudices, and all the obstacles to shine like stars.

Today start-ups and Venture Capital industries are disrupting how we live and communicate. In these times, Julian’s exceptional work, which captures the backstories of these Alpha Girls is hugely pertinent. It shows how the culture and conditions have been for women in these industries over the years.

Though the book focusses on these four women from Silicon Valley, it can find a deep connect with Indian women. Primarily, because the stories are also a reflection of what women, in general, go through when they aren’t ready to give up on their careers. These compelling stories will act as a mentor to every woman in moments of doubt and conflict.

Stories need to be shared, especially stories which speak about the successful journeys of women because they are empowering and inspire others.

Meet the four unstoppable women of the book

“The best way to avoid getting seasick in turbulent waters is to focus on the horizon. If you focus on what’s nearby, you are going to get sick. Keep your eye on where you want to go, on the horizon as your long term goal and steer towards that.”

These are women just like you and me, coming from humble backgrounds. What’s common to all of them is what made them succeed. They looked past possible slides and barriers, manoeuvring through all the obstacles. Their tenacious optimism, extreme perseverance, and their love for what they do made them break all the glass ceilings.

How is this book relevant for us?

Alpha Girls is one of the very few books which brings us the stories of women in Tech, and specifically the VC industry. These are four resilient women from extremely humble backgrounds who broke and remade the rules through their sheer grit and determination.

The idea for the book came to the author while she was promoting her third book How To Make A Spaceship. It was the realization that there weren’t enough women in the room.

The focus is on Silicon Valley, where women form just 5-6 % of the total pool. They started their careers when the world was yet to awake to the magic of the Internet and e-commerce. They went on to build and grow some of the foremost companies of our times. What also makes the book unique is that the author allows her readers to witness the rise of the Internet, start-ups, and the VC worlds across the crucial years through the stories of these women.

A few months back, I had come across an article about how women in Indian VC industries were taking it upon themselves to drive a change in the male-dominated industry. Alpha Girls details all those struggles and more.

The journey of these women is a journey of every Indian woman who has survived and emerged victorious in a world where men define the rules. Sharing such stories is vital because they reshape perspectives and change narratives about how successful women are perceived.

Alpha Girls is a book where Tech and VC meet human and emotions. It is a book of backstories of all these incredible women who are successful and speak about their achievements, regrets, missteps, insults, injuries and vulnerabilities.

The author has seamlessly woven the personal and professional lives of these Alpha Girls in a very lucid manner.

The very structure of the book draws in the reader – it covers the period between 1980 and 2018 depicting the trajectories of the women across specific time intervals, through nine chapters titled very thoughtfully with names like The Outsiders Inside; Survival of the Fittest; Marriage, Motherhood, and Moneymaking.

Even though it has a lot of business content, it reads like a novel with intricate details and hence, is unputdownable once you start. I could follow their stories through their eyes. They loved their industries but had to hold back sometimes. They navigated through the barriers at every stage and managed all this along with taking care of children, ageing parents and a working spouse.

Alpha Girls, an essential read for every Indian career woman

“Theresia was the square peg in a round hole, unwilling to be knocked off the professional ladder. Everywhere she turned, she felt as if the society were telling her she needed to be less of success at work to be more of success at home.” 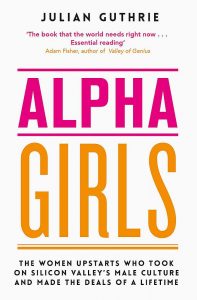 As Indian women, we get caught in a dichotomy of choosing between family and career. At work, we are continuously subject to biases, off-colour jokes, the difficult decisions about when and how much to the network, and when to let it go.

“Sonja felt that the universe had staged an intervention. She had been outed as a woman and turned into a feminist overnight.”

Though these women belong to Silicon Valley, the obstacles they encountered are representative of women in Indian Silicon Valley as well. As someone who started her career in Tech in India in the early 2000s, I could very well resonate with the issues these women faced. The barriers don’t exist in silos. They are everywhere. The biases we face when seeking a sabbatical aren’t new or unknown. The gender inequality and that need to over perform to prove a point is what we all have experienced. We may have been looked down upon and discouraged several time at work, and that is universal.

Amidst all this, the success of these Alpha Girls is so relatable and real. They broke the glass ceiling with each incremental success. Like this incident where Magdalena shares how the women assistants cheered her when she became the first woman general partner at a VC firm. The women assistants felt as if it was their achievement, and so they applauded her standing outside the glass chamber, which had all men.

Leaving you with this quote: “You have to decide in life what is right for you. You don’t have to obey all the rules.”

If you would like to pick up a copy of Alpha Girls: The Women Upstarts Who Took on Silicon Valley’s Male Culture and Made the Deals of a Lifetime by Julian Guthrie, use our affiliate links at Amazon India, and at Amazon US.