"I know I can make a positive change in the lives of these children," says Piyusha Vir, "which demanded that I move so far away from home and do the work I needed to do, a calling, if you will."

“I know I can make a positive change in the lives of these children,” says Piyusha Vir, “which demanded that I move so far away from home and do the work I needed to do, a calling, if you will.”

A few years ago, a young fifteen-year-old girl was shot in the head. Her crime? A simple demand-that she be allowed to study.

The girl was Malala Yousafzai and her fight for education continued even after a brutal attempt by one of the many agents of oppression to snuff out her voice. The reason she continues her battle fearlessly even today is because the right to education is a basic right.

Reading Malala’s account in I Am Malala changed my perspective towards accessibility of education drastically. Closer home, there were many people around me who were making a difference and creating awareness through various initiatives. These amazing women, making a mark through their own efforts of bringing about a change, have had a strong influence on me and spurred me on to make a difference in some or the other way.

When one such power woman, Radhika Tabrez, referred me to this non-profit school for the underprivileged, the first thought in my mind was ‘I want to be part of this initiative.’

A school in the wilderness

Started almost a decade ago, the school was set up with the aim of providing free education to children – which despite being a constitutional right is being denied to a large section of society. The fact that this particular school was in a village, 20 kms away from a small town of one of the most backward states (Jharkhand) did not deter me from sending in my application. Instead of being supremely confident that on account of my experience and qualifications I’d be accepted, I was worried that someone else would grab the opportunity before me. I was surprised to know that the school management had no inclination to hire me because of their limited funds. 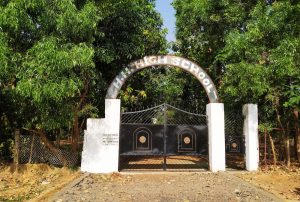 ‘Do what you can, when you can,’ said most such inspiring women like Kirthi Jayakumar, Michelle Obama, and Malala Yousafzai.

There are, I’m sure, many such schools in the vicinity of where I live, but my intention wasn’t to join just any school or join hands with any non-profit organisation. It is comfortable to live in one’s own home and go out to teach for a couple of hours. It is what I, or anyone else in my position, would have wanted to do. For some reason, I paused to consider the whys and the why nots of joining this particular school among the others.

Don’t the villages near Delhi already have enough teachers who’d be more than willing to do this, I asked myself? Did the villagers in and around Delhi already not have smartphones and internet access that they could use to further their knowledge? What difference would I be making if I were to be just one of the many who lived in luxury and wailed about how unfortunate it is that most don’t have access to education?

First, the hard, cold facts about education in India

While we may not have the Taliban obstructing the access to education, we do have our own set of terrorists and oppressors. The lack of education is an epidemic that hinders economic, social, technological growth of our country.

The glaring and unfortunate truth is that the right to education is mostly exercised by those with the necessary resources to avail of such benefits. According to a 2014 UNESCO report, 287 million adults in India are illiterate. That’s 37% of the world’s illiterate population. If you think that’s a staggering statistic, consider this: Only 11% of the government’s budget is spent on education.

That’s not all. Jharkhand is the second-most illiterate state in India. This, when we all know, the state is populated with whom we would classify as ‘economically and socially weaker sections of society’. Shouldn’t the focus be on improving their literacy levels and bringing them to par with the rest of the country?

These cold facts would seem only that without context. As I scrolled through the school’s official Facebook page, the beaming faces of the students jumped out at me. These were children who wanted to learn and were willing to go to any lengths for it.

Getting to know the school

In my first conversation with the school’s founder Shadab Hassan – a young enterprising man who left his corporate career to pursue this, I got to know how difficult it is for them to procure resources and funds to provide an environment that’s conducive to learning. I was already aware of how they had used the support of crowd-funding to buy a second-hand bus to ferry students who lived-in far-flung areas. 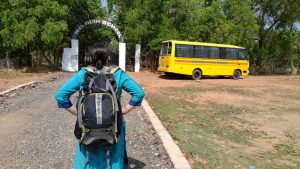 The possibility that access to good education was being denied to those deserving and desiring of it made me sad. It made me want to do something – whatever little I could to help make it easier for them. Sending them a cheque of a few thousands was the easy option. It would be the saner thing to do, except that the thought itself made me feel guilty – as if I was simply absolving myself of any obligation towards these kids.

So why did I want to become a teacher here?

What weighed on my mind most was that here was I, a qualified and experienced English Language Trainer wanting to bring about some change, and on the other side, were these kids and adults who did not even have access to basic requirements and still wanted to learn and study. Wasn’t this the perfect opportunity to go above and beyond, and help be the change I wanted to see? 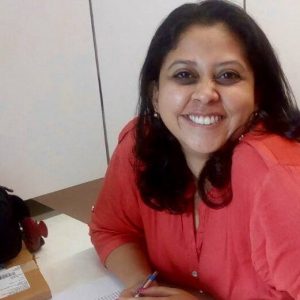 There were many others who could help with finances, I figured. Besides, I wanted to contribute with my efforts not money and I wanted to be more involved. That was when I decided to be just like those children – ready to go to any lengths, that is, to bring that change in their lives. Those faces were full of hope and determination. Whenever I thought of the work that I could do, it filled me with a sense of excitement. Looking at those faces in the photos and their expressions of hope and wonder-filled me with similar emotions too.

It helped that the school was located in the middle of a lush forest and boasted of fresh air – a rare commodity in Delhi. The tranquillity and greenery of the place beckoned to me like a flower to a bee.

It was also to my advantage that this opportunity could well prove to be the one turning point in my life I was looking for – to make a difference for the future generations and the education system in our country. (I truly believe that had I got better teachers in school I’d probably have done much better in life, and maybe even academics. Maybe the desire to teach these children stems from trying to be the teacher I’d have wanted while growing up.)

It wasn’t that I was trying to be some hot-shot award-winning change-maker. It was about using the skills and expertise I had, and simply filling a gap in the demand-supply equation. I could make education and learning fun for these kids. I could introduce innovative learning styles and methodologies they were unfamiliar with. I could bring in new techniques and initiatives that would bring education to those who couldn’t access it for themselves. I could even train other teachers and help them become better trainers who would further the cause of education.

And, no, I couldn’t have done it in an urban metropolitan city like Delhi. Or maybe, I could have. But in my mind, it wouldn’t have been the same thing. I am not waging any kind of war against illiteracy. I wanted to be part of this particular school and help these kids who craved knowledge. I know I can be the one to give it to them.

That is the only motivation I had when I decided to move a 1000 kms away from home to an unheard of village near Ranchi.

The journey has only begun and there are miles to go before I sleep. But I have started off and I am doing what I can, when I can. I do not know where this road will lead, but for now, the journey is what I plan to enjoy. 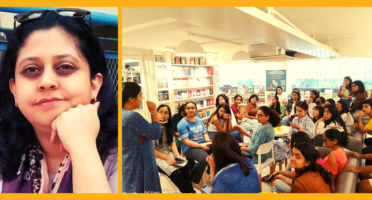