How I Breastfed My Baby, Despite My Newborn Given Formula Without Asking Me

Everyone, including my paediatrician and family elders encouraged me to feed formula to my baby, but I still managed to breastfeed her as I wanted to.

Though the only purpose of breasts is to feed a baby, yet breastfeeding is not something that is openly discussed or encouraged. On the contrary, new moms are directed towards formula milk or animal milk.

For me, it all started three years ago. I gave birth to a child, and without even asking me or any other family member, my newborn daughter was given formula. I was aware of the importance of colostrum but every time I asked someone about it, I was asked to wait.

And everyone (wrongly, as it turned out) encouraged formula!

On day 2, baby was brought to breast and the nurse told me that nipples are not big enough to latch on so I should give formula. Later, she even tried to elongate my nipples with a syringe!

I was sent to home with a box of formula and no such instructions about breastfeeding. My mother and Mother-in-law told me multiple times a day that I am not producing enough milk and that is why baby is not sleeping properly. They wanted to give baby formula while keep telling me how their breasts kept leaking when they birthed kids. My MIL even told me that she had to discard many bowlful of breast milk because she produced more than her baby needed. Though I may laugh at it now but this depressed me to no end, at then.

I remember when I went for regular check up of my one week old and paediatrician told me that weight is not as much as it should be. I was advised to give her some top feed.

I wonder now; how everyone, be it family members or medical consultants, was in some kind of haste to recommend formula instead of helping a new mom on how to feed.

But I got my information from other moms

So once I was back from hospital, my MIL gave my girl some formula and she slept for some 4-5hours. This was the visible proof of my failure but somehow it didn’t seem natural. Thankfully, on that very day a dear friend introduced me to BSIM (a facebook group) and suddenly all my questions were answered without even actually asking them.

I remember one particular incident which decided the fate of our breastfeeding journey. One night my 20 days old daughter was crying constantly, and both my husband and I were at the end of our wits. So we thought to give her some formula hoping that it would make her sleep.

That night, I knew that I was doing something very right, no matter what anyone else said.

And then she self weaned

It has been a month since she herself stopped breastfeeding.

I was told many many times that I should “try” to stop her because it will not let her be independent, because she is not eating solids properly, because she is clingy, because later it will be next to impossible to wean her, because this is causing global warming (yes, pun!) And what not.

But she self weaned, without even a word about weaning.

Last week, she asked me for happu (her word for BM)  and I offered. She sucked for a minute and told me happu khatta ho gaya hai (it’s sour now) and I know that we are done for forever.

Though I don’t actually miss breastfeeding her but I miss the sparkle in her eyes whenever we breastfed. And I feel clueless on how to make her sleep, how to bring her to bed, how to put a stop on every tantrum, how to soothe every fall and bump! Before, all these things were done just by a glimpse of a boob.

Was it worthwhile? Yes, in all possible ways. 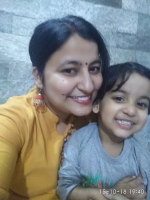 Non-lactating Moms: Don’t Be Hard On Yourself. Hang In There!

She’s A New Mom, Just Drop Your Judgements About Her