Yesterday, 12th February 2019, SHAKTI was launched. A Citizens’ Movement to change how women are represented in national and state level politics and governance, and here are my key takeaways.

70 years after India’s independence, we take pride in our achievements across various fields, but one area where we haven’t made any progress is the representation of women in state and national level politics. Women comprise only 11.8% of parliament members. This is not just abysmal, but also hasn’t changed much over the decades since independence.

It is shocking that India ranks at 153 out of 192 countries when it comes to women’s representation in national and state level politics.

It is not a case of developing vs developed nations, as one might think. The top countries on this scale happen to be Uganda which has 61% women’s representation, followed by Cuba, Bolivia and Mexico. Even the Arab countries fare better than India with an average of 19%. The other South Asian countries also have a better average of 24%.

Patriarchy and power dynamics certainly do have a huge role in this. But if left to itself, these numbers aren’t going to change. And that’s where Shakti’s role as a citizens’ movement becomes so pertinent.

Shakti – “Political Power to Women” is a non-partisan inclusive platform of women who have joined hands regardless of region, caste, creed, and ideology. 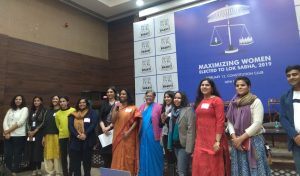 Co-founded by Tara Krishnaswamy, Shakti is working hard with a single-minded objective. Using both top-down and bottom-up approach, it is trying to maximise women elected to Lok Sabha in 2019. It is pressurizing political parties to field more women candidates. And at the same time mobilising more women to come out and vote for women candidates.

With the Lok Sabha elections coming up this year, Shakti’s role as a movement becomes extremely significant.

Shakti – the need of the hour

There is a lot of coverage happening about upcoming elections this year. Various national and regional issues faced by the voters are being discussed. But very little attention is being paid to an important election issue, which is gender.

The representation of women in state and national level politics in India has been steady but low. This is surprising because, in the past 25 years, we have had more than a million women who have been elected in Panchayats and various local bodies. Thanks to the reservation at that level which has ensured this.

However, there doesn’t seem to be an institutionalized or systematic way, for these women who have proved themselves at the level of local bodies to rise and join national politics. At the same time, the Women’s Reservation Bill even after being introduced many years back still awaits a pass from the Lok Sabha.

There may be many myths around women politicians and candidates. But the data released by Press Information Bureau, Government of India speaks otherwise. Right from 1952 till the elections of 2014, the winning percentage of women has always exceeded significantly over that of men. This is in spite of the fact that the number of women candidates fielded by political parties has always been less. In the last Lok Sabha elections, only 8% of candidates were women but 11% of winners were women. Across the years from 1952 till 2014, the number of women MPs in the parliament has increased just from 24 to 66. This is not even a single woman in addition per year! Such appalling data definitely calls for attention and immediate action.

(Data as shared by Shakti team during the launch)

Yesterday I attended the national launch of Shakti at the Constitution Club of India in Delhi. Over a 100 invitees attended the event including Members of Parliament, politically ambitious women, students, women’s groups, media and many others. People from all sections of society came together and joined hands to show their solidarity for the cause. 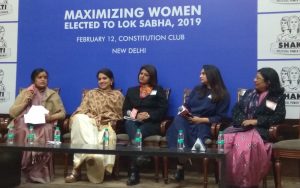 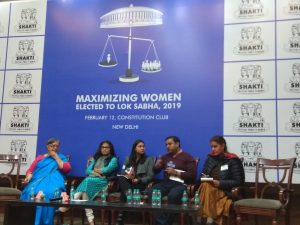 When some powerful voices demanded change…

Those were powerful voices. Speaking with authority and their experience, backed by data and research. And the impact was truly exceptional.

The message was clear – Political space has been dominated by men. It needs to be invaded by women. The time is now. Ms Divya Spandana made an open appeal to Shakti- “Create a mass movement for women across parties to come together. We, in Congress we all will join you and march for the Women’s Reservation Bill to pass, no matter who comes to power”

Here are my 8 key takeaways from this hard hitting discussion that is a ray of hope for women.

One: Political parties need to re-think their policies

“Political parties need to move away from the attitude like kisi ko nahin chahiye to mahila ko de do, jeete ya haare koi pharak nahin padta. (If no one wants a seat, just give it to a woman; it does not matter if they win or lose)”. – Ms. Shaina N. C.

Two: Women need to support each other

Women have to support other women in their political ambitions and growth. 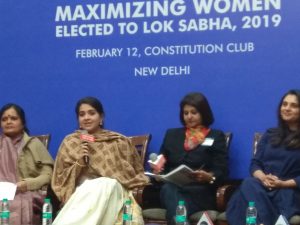 “They say, ‘Mahila ko to mahila morcha mein hee rahne deejeye.’ (Let women remain in women’s groups) Women do not support women in politics. We have senior leaders who don’t let other women rise. This has to change.” – Ms Shaina N.C.

Three: Women need to be taken seriously within the party

One of the most important issues that women politicians face today is of fixed mindsets and stereotypes. It is essential that they play on the card of competence and not compassion, to break the glass ceiling.

“When I was given the charge for social media, many people raised fingers as to how can a woman politician handle tech and how can she perform?” – Ms Divya Spandana

There is a resistance amongst parties to bring in more women because men fear that power dynamics will change.

”It is very difficult to convince male members of the party to field women. There is a belief that men have more chances of winning due to both money and muscle power. So there is a natural inclination to give more tickets to men. To be taken seriously, a woman has to be twice as intelligent and hardworking as her male counterparts. There are so many preconceived things about women. And this space hasn’t been used to accommodating women. Policies aren’t inclusive.” – Ms Karunanidhi Kanimozhi

Five: We need to have more men wanting women in power

The narratives can change only when we have more men involved in this movement. 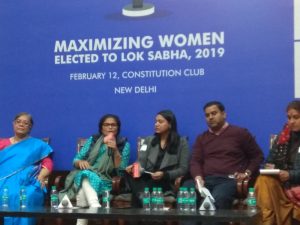 “Patriarchy is deep-rooted. There are fewer women in politics because there is a smaller number of women in schools and colleges. Tokenism in the name of Women Empowerment is the worst thing you can do. To give 26 weeks of only maternity leave is the best way to ensure women are not employed. If you are giving maternity leave, give paternity leave also. Why Beti Bachao, Beti Padhao, why not Nari Bachao, Nari Padhao – Why do we have to link it with fathers? Make a man into a WCD Minister, that’s a start!” – Ms Sushmita Dev

Six: Look at reasons other than patriarchy for low number of women voters

Patriarchy is a big contributor but we also need to go beyond patriarchy to ascertain other reasons for the low participation of women voters. Patriarchy may not always be the sole reason. The varying data across different Indian states speaks about it.

”We need to think what could be more creative solutions, where men feel they are not losing power, and at the same time we increase women representation” – Mr Rahul Verma

For a woman from a non-political background, it is still very difficult to make a foray into politics. They need male patrons irrespective of caste. Apart from patriarchy, elections in India are also about money. There is a need for mindset change as well as financial empowerment for more women to join politics. 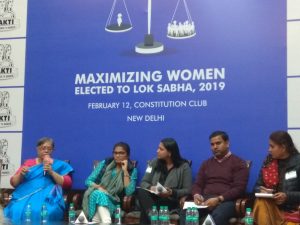 “More and more women, especially in rural areas, are becoming assertive in running their own lives and want economic independence. We have to talk to women voters as women, not as caste or any other identity. Women prefer women candidates but women in parties are not trained on how to aggressively demand the vote.”–  Ms Lalitha Kumaramangalam.

Eight: It’s a challenge to mobilize women to come out and vote for women

Mobilizing women to vote for women candidates is a big challenge in many parts of the country.

“Agar isko vote daal dee, Haryana ke choro ko jail mein dalwa degi. (If we vote for her, she’ll jail Haryana boys). It is very difficult to mobilise women to come out and vote for women candidates. Rahna to ussi ghar mein hai na, agar pataa chal gaya ki maine vote mahila ko diya hai, to mushkil ho jayegi. (I have to stay in the same house – if my husband comes to know that I have voted for a woman, it will mean trouble for me) So all three factors of class, caste and gender play a big role in influencing against voting for a woman candidate.“ –  Ms Jagmati Sangwan

An uphill task, certainly, but worthwhile

Yesterday, I witnessed a wave of solidarity and support. A promise and a pledge to join hands irrespective of ideologies, gender, caste and religion. Something which shone so distinctly across the panel, the volunteers as well as the audience. It wasn’t surprising to know that the wonderful event was put together by volunteers who didn’t even know each other till three weeks back. Also that the funds for the event were purely crowdsourced from across the country. Indeed a precursor to the stupendous change which is in store.

Today Shakti is here. And is all determined to bring that much-needed change in the narrative which governs women’s representation in state and national level politics. The movement makes me feel hopeful about a change. That there will be more women representation in the 2019 elections and more than 33% by 2024.

Here is wishing more power to the force which is SHAKTI!

As An Indian Woman, I Want My Right To Represent In Government!