Anuja Chandramouli’s book ‘Ganga: The Constant Goddess’ retells the story of Ganga, one of the most revered entity in Hindu mythology. Anuja Chandramouli’s ‘Ganga’ begins with a prelude- Pralaya or the great deluge. “Sleep continued to elude her as she watched over those who slept. It did not bother her in the least. Why rest […] 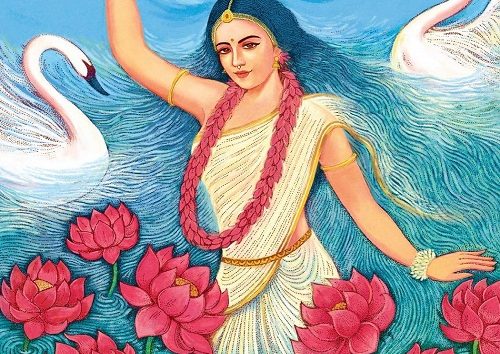 Anuja Chandramouli’s book ‘Ganga: The Constant Goddess’ retells the story of Ganga, one of the most revered entity in Hindu mythology.

Anuja Chandramouli’s ‘Ganga’ begins with a prelude- Pralaya or the great deluge. “Sleep continued to elude her as she watched over those who slept. It did not bother her in the least. Why rest when you can flow forever and ever?”

Anuja tells the story of the daughters of Himavat and Mena that is Ganga and Parvati. As a reader, I found the character sketch of Ganga endearing. Parvati is described as a “quiet child who is perfectly content to be alone with her thoughts,” while Ganga’s “natural ebullience” makes her “spirited and headstrong.” The roles of the sisters in Lord Shiva’s life are etched out, and while Parvati is devout and serious, Ganga is playful and defiant in the way she relates to Him. Anuja tells the story of how Parvati becomes His consort while Ganga delivers the child born of Parvati’s and Lord Shiva’s union. Ganga finds a place in His tresses and is the “other mother” to Kartikeya and Ganesha.

When Ganga tells Ganesha that she was the one who told Parvati the stories that she now tells him, she mischievously adds that they were tales about “Taming a Shrew”. The book is replete with several accounts of other Gods and asuras and the role that Ganga, the constant Goddess, plays in their life, death, rebirth or salvation, is described.

Anuja’s Ganga is a feminist. Anuja contrasts the personalities of Ganga and Saraswati (who is a “thinker.”) “Ganga said nothing but she was mightily pleased that she was one of life’s doers and not thinkers. The latter tended to get in their own way a lot, and trip themselves up as well as others who were not careful.”

And yet, “Ganga seldom had or would admire anyone more than she did Saraswati. As far as Ganga was concerned, the goddess of knowledge and Brahma’s consort was the only reason to stay on in Brahmaloka. Unlike Paro(Parvati), she was entirely non-judgemental and more importantly, their conversations and non-conversations were engaging.”

Ganga is always portrayed supporting the women in her life and is caught ruminating “What had Shiva done to earn the love of her sister who was too good for him?” or in trying to understand the complicated relationship between Indra and Saraswati. The story of Kama, the God of lust is also told with sensitivity.

Ganga finds love in a mortal, Mahabisha, who pays the price for loving a Goddess with his life. The story of Radha and Krishna is narrated too.

The tale of King Shantanu, who falls in love with Ganga, is told in a classy way, with descriptions befitting Gods and Goddesses. I have read stories about King Shantanu written by other authors who describe the sexual congress between some of the characters in a rather crass manner. But, Anuja is always mindful that she is talking about Gods and Goddesses of the Hindu pantheon, and she uses language befitting celestial beings.

In her note at the start of the book, she does say, “A story with its permutations and multiple meanings can be an immersive, intensely personal experience that can be whatever you want it to be- deeply affecting, wildly entertaining, deliciously wicked or bloody annoying. Whichever way it goes, my Ganga belongs to the genre of mythological fiction, though it has been painstakingly researched and I suggest the reader just dive into the icy depths, surrender to the swirling currents and enjoy the journey into the enchanting, mystical, profound and playful world of the constant goddess.”

Anuja Chandramouli’s Ganga Is So Much More Than Just A River Or A Minor Goddess!