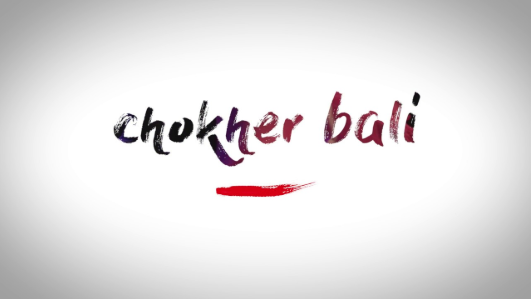 Rabindranath Tagore is one of the most cherished renaissance figures of India. He put India on the literary map of the world by winning the Nobel Prize for Literature in 1913. Recently I read one of his prominent novels- “Chokher Bali” (“Sand in the eye”). There have been many movie adaptations of this novel, including the famous movie of the same name directed by Rituparno Ghosh. Tagore’s writings are known for his deep understanding of the nuances of female psychology. And this novel is no exception. It portrays some strong female protagonists, who are sure to etch indelible marks in your memory once you finish the novel.

Mahendra is the only scion of a rich family based in Calcutta. Bihari is his childhood friend, who frequents his house. Mahendra’s mother wanted him to marry Binodini, her friend’s daughter. But Mahendra refused. Then his mother requested Bihari to marry Binodini and save the poor girl which Bihari refused. Eventually, Binodini got married to a man who died soon after marriage. Meanwhile, Mahendra married Ashalata, a poor orphan girl. Mahendra was besotted with his wife when Binodini came to live in their house. With time, an extra-marital relationship develops between Mahendra and Binodini, which threatens to destroy his marriage with Ashalata. But soon Binodini discovers that Mahendra is a self-obsessed person, unable to provide a safe shelter to her. So she inclines towards Bihari, who lives life by principles. Throughout the novel, there is an implicit implication of Bihari’s affection towards Ashalata, though he never crosses the boundaries of the relationship. In the end, Bihari falls in love with Binodini when realizes her feelings for him. He proposed to marry her, which Binodini refused saying that she doesn’t want to ‘dishonour’ him further. During that period (the novel was written in 1902), widow remarriage was not well accepted in society. That may partially explain the reason behind Binodini’s refusal. In the end, Binodini leaves for Varanasi- a fate that awaited most of the widows in those days.

The novel portrays the contemporary Bengali society and the treatment meted out to widows during that period. I loved the characters of both the female protagonists- Ashalata and Binodini. The character of Binodini is well-crafted. She was the kind of woman who was far ahead of her times and had to pay heavily for it. She was educated- an aspect uncommon among women of that era. Her father arranged for a ‘missionary mem’ (a missionary woman from Europe/England) to educate her. Even after she crossed the ‘marriageable age’, her father never bothered about her marriage. After her father’s death, her mother began searching for a suitable groom. She got married and after a short period of marital bliss, she became a widow. Though the society prescribed an austere life for widows, Binodini was a rebel and refused to succumb to societal pressure. She was young, beautiful and intelligent. “…Sikha ek vabe ghorer pradip rupe jwole, ar-ek vabe ghore agun dhoraiya dey” (The same flame which lights the room, can destroy the whole house), observed Tagore. She craved for love and companionship like all, in spite of being a widow. She mistook her feelings for Mahendra as love and came close to ruin his marriage. Later when she realised that Mahendra is too blind to understand her, she left him and boldly sought shelter to Bihari. But the end of the novel fails to do full justice to her character. When a woman as strong as Binodini chose to stay at Varanasi for the rest of her life, like all others, readers like me are left disappointed. In Rituparno Ghosh’s film, Binodini joined India’s ongoing struggle for independence at the end. I think that befits a character like her. Though Ghosh’s movie doesn’t strictly adhere to the novel.

The character of Ashalata seems dull in comparison to Binodini in the beginning. But when her husband left her for another woman, she took charge of her ailing mother-in-law and the entire household.

The character of Mahendra seems narcissistic. He lacks any definite purpose. Being self-obsessed, he went on from Ashalata to Binodini who ulitmately rejects him. Then again he came back to his wife who re-accepts him.

No need to mention that reading this novel was a sheer pleasure. If you haven’t read this novel yet, do read. For readers whose native language is not Bengali, you can go through the translated version of the book. Each of Tagore’s work is a masterpiece on their own.

An engineer by education, I am a civil servant by profession. A doting mother. An

Star Plus’ Anupamaa May Be A Slight Cringe-Fest But It Asks Important Questions About Respecting Mothers!