I spoke to Milan Vohra, the author of India’s first Mills & Boon novel, The Love Asana, and the book Tick Tock We’re 30 about writing and books.

I’ve met some authors in the last few years and found that the women have one thing in common — they hate being called “women writers”, and Milan is no exception.

“It is a phrase that I believe only a man could create. It creates a point of reference that’s unnecessary, almost as unnecessary as saying someone is a vegetarian/ non-vegetarian writer.”

I believe we all write for our times. And not even consciously. Our writing will reflect the times we live in and more so after some time has elapsed so that history and future readers will take away other things that spoke of the days and times we wrote in.”

I also wanted to know from Milan her thoughts on the role of writers, to which her reply was, “Write your characters believably. Your role is to let your readers see why a person is the way they are, why they acted the way they did and arrive at their own conclusions. If you’re writing fiction you need to be true to the story you’re telling. The back stories are what shaped your protagonists, and if as a writer we can let those emerge and let the reader draw their own conclusions, it’s so much better.

As a writer, you’re not here as a messenger of morals or ideals for womankind. Your characters’ actions and the consequences of those actions should be relevant and believable within the story – that is the most important. However, I think my own preference for strong, assertive women who think for themselves and who do not like being told what to do, does influence how I see my heroines. But again, being confused, being fallible are human traits. I don’t see it as something that’s typical of any one gender and wouldn’t.”

This led me to wonder whether readers expect women to write in certain genres, like chick-lit or mom-lit.

Milan said, ‘Not at all. I’ve seen men and women both write across so many genres and do a terrible or terrific job of it. Gender has little to do with your ability to tell a story well. In fact, I preferred the days when we knew nothing about the authors we read. We seldom knew their nationality, gender or politics. We just knew we liked reading that author. Knowing too much via the Internet is such a mixed blessing/ curse.”

I wanted to know how she has represented women in all their facets in her books and requested her to throw some light on the themes central to women that she has explored in her books.

“I want to write a character as truthfully as I know. If being a woman has impacted the character’s life at some stage that is relevant to the story, then obviously I will explore it to the full.

It would be presumptuous to say I’ve represented women in all their facets. How could anyone claim to have done that? But I hope to have done justice to the characters I’ve created and if being a woman has impacted their story then I’d hope I’ve let that come through. For example, Maneka in Tick-Tock We’re 30 is a successful professional and far more successful than her husband. This does impact his ego and libido, and the play-out of this on their marriage is one of the subplots in the book.

In one of my short stories It’s A Game We Play, I wrote about a girl child’s abuse by a much older man and her lack of vocabulary to even talk about it. Another short story The Call is about a young woman’s dilemma about adopting a child and the resistance she encountered from various family members. Yet another short story Rekha is about an adolescent girl’s reaction to meeting a transgender person for the first time, and her reaction on being asked to become a part of the transgender person’s plan for escape. I think the protagonist here behaves in a way that could be expected of either a young boy or girl. It was a response led more by their relationship with their parents, not because of being a girl. Each story has one thumb rule only… for the protagonist to be believable. Being a girl may or may not be an important factor in how the character was shaped.

Finally, I couldn’t let Milan go without telling me her advice for women aspiring to write a book.

“A lot of women I meet often say I really want to write but.. So many buts that I couldn’t start to list them all here.

My advice is – immerse yourself fully in it. Stop thinking about everyone else and their opinions and other priorities, and all that you need to do. The world, the home will continue to function. This burning desire to write is something you want to do because you believe you can write. How will you know that’s true until you do it? And again, what anyone else thinks of what you write shouldn’t be as important as writing it first. Enough with trying to please and worry about others. Please yourself and put yourself on priority. Lastly, please write without judging yourself.” 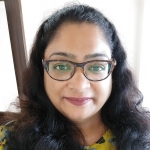