A woman deserves to die if she can’t love a man back. Sounds absurd, doesn’t it? Well not to Mr. Karan ‘Liberal’ Johar who killed off a female character for daring to reject a man.

In a recent interview to Huffington Post, Karan Johar while talking about Alizeh, Anushka Sharma’s character in his movie Ae Dil Hai Mushkil said, “I was like she didn’t love him [Ranbir Kapoor’s character Ayan], she has to die. I wrote this character. He loved her so crazily. She could’ve loved him back, why couldn’t she? So she got cancer and she died.”

Is it not a vile justification of the fact that if a man loves a woman, she HAS to love him back if she doesn’t, then it is okay for her to be punished? What makes it worse is the statement that it was a personal catharsis for the well-known director who said that Ranbir played him and he wanted to deal with a personal injury caused by heartbreak.

These views are problematic at so many levels. We live in a society where girls are stalked, abused, made victims of acid attacks and even raped and murdered if they fail to respond to a man’s advances. It is not ok to normalize a problematic, vindictive behaviour in the name of art.

He further added, “I didn’t look at it like that, to me he was just a puppy who was just in love and it’s not like she didn’t love him. She just didn’t love him in the way that he wanted her to love him.” He is legit justifying a toxic, physically abusive guy as a ‘puppy in love.’ Can it get anymore cringe-worthy?

A lot of people may feel that it’s just a movie and not to be taken too seriously. Well, Bollywood has been romanticising stalking since long. Countless guys sported Salman Khan’s hairstyle in the movie Tere Naam where he played the character of an obsessed lover who abducts his love interest when she doesn’t respond to his advances. Thousands of young boys idolise him and emulate not just his style but also his characters. And one can’t dismiss it as a trashy movie; even a critically acclaimed one like Raanjhana was about an obnoxious lover who refuses to give up on his love even after he unknowingly manages to kill the girl’s actual love interest.

I thought that the days of Govinda and Sanjay Dutt singing “Kab tak roothegi cheekhegi chillayegi; ek din haseena maan jayegi” (how long will a girl remain angry, scream or shout; one day she will give in), were over. It hurts when the present day flag bearers of modern and ‘liberal’ Bollywood like Karan Johar make such statements. But I guess male entitlement is ingrained way too deep in the psyche.

It seems patriarchy and misogyny in our film industry are here to stay. 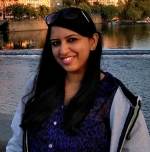 Dentist by education, writer by passion. In my earlier avatar I taught budding dentists and

In India, A Woman Doesn’t Have The Right To Change Her Mind About A Boyfriend

“We Are Equals”: No, Aafia, You Don’t Have To Degrade Yourself To Get Married