Being Reshma: Read It And Cheer For The Acid Attack Survivor Who Conquered

In Being Reshma, Acid Attack survivor Reshma Qureshi gives us an immensely moving memoir that exposes the depths of human depravity, while simultaneously offering a glimmer of hope.

What is it to be a victim of an acid attack? A horrendous crime that disfigures your face and also scars your soul? It is unfathomable to even think of a life like that and yet, there are thousands of women living that exact existence.

My first brush with acid attack survivors was at the Sheroes’ Cafe, Agra, an eatery set up and run by survivors of acid attacks. As I chatted with them and heard their stories, something within me slowly changed. That change cannot be explained, but only experienced. While I was pained to hear of what they had endured, I also began to admire their grit and strength. As I left the café that day, I walked away with something valuable – for meeting them had changed my idea of beauty for ever.

When I was asked to review Being Reshma, this new memoir co-authored by Reshma Qureshi with Tania Singh, I eagerly agreed without a second thought. The long wait (the book was apparently returned undelivered twice!) was well worth it because this book is everything it promises to be, and more!

This isn’t simply a first-hand account of an acid attack survivor’s struggle. It is instead a celebration of her indomitable spirit – a story that inspires, infuriates, astounds, and eventually, transforms the reader.

My discomfort, her lived reality 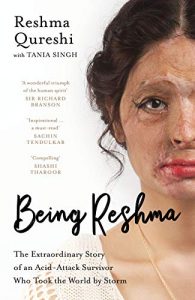 Much like the first interaction with the survivors at the café in Agra, the first impression of the book too gives off a casual vibe. It starts off with an endearing anecdote about Reshma’s innocence and naiveté. It instantly warmed me upto the young child that was Reshma. There is always an undercurrent of the tragic incident that is yet to come, and how it will undoubtedly change her life, but this is done smartly and always manages to keep the reader on edge.

The switch between the past tense when she’s narrating her childhood to the present when she mentions how some of her habits haven’t changed make one marvel about her positivity and resilience. Lines like “Mumbai changed, my family changed, I changed. But some things always stayed the same” and “Back then, I used to live for Biryani. I still do” indicate this to the reader.

It was these subtle references that caused me to dread the impending tragedy yet to be mentioned in the book. It is then that the realisation hit me with full force – what I was yet to read and even felt uncomfortable with, was something Reshma had already lived through.

I literally had to keep the book aside for a day just to prepare myself for what was to come ahead. But the truth is, and as I had also realized earlier during that balmy afternoon in Agra, no amount of mental reassurance is enough to actually prepare you for what they have to share. (And, unfortunately, no matter how many times you realize this, it still hits you hard.)

The book is an extremely personal narrative of Reshma’s growing up years. The conversational tone helps keep it light and friendly – as if you’re chatting with her over the phone or messenger. I gather this is the outcome of her comfort level and interactions with Tania Singh, her co-writer for this book. Full kudos to both Reshma and Tania for keeping the tone conversational and informal on a subject that is this tragic and unnerving.

Several incidents in the book are heart-breaking and jolt one out of the comfortable bliss of ignorance and sheltered existence. The incidents of violence (that her sister experiences at the hands of her in-laws) preceding the actual attack may well be a precursor of things to come, but it is so only in retrospect.

One such line that gutted me completely is when Reshma describes her own feelings upon seeing the condition of her two-year-old niece Riza, “It is Riza’s image that haunts me the most even today. She had large blisters all over her arms, her back, and around her neck. Big, ugly boils.”

The incidents when she is told about her mother’s illness or the apathy of the medical staff towards patients and their families broke my heart. The incident where she narrates the story of a fellow patient who had been beaten senseless by her family for conceiving a girl child is another example of the heights of depravity.

Despite all that grief and despair, Reshma manages to show a ray of hope to the reader. This is evident in one of the most powerful lines in the book: “Years later I realized that kindness knows no bounds and as violent and cruel India can be, it is also home to the gentlest people on Earth.”

The writing is simple but impactful – several times I caught myself unable to breathe while reading about the horrors that were unfolding in her life. That constant nagging reminder that this was no fiction is probably what makes it even more honest and heartfelt. For Reshma Qureshi isn’t even trying to make it palatable. Her honesty comes through in her expressions of regret, her admissions of guilt, and her accusations against society.

For, all its personal and emotional narration aside, the book does not shy away from making powerful social comments – Reshma isn’t just sharing her own personal story but speaking up for other victims of violence and injustice too.

“In our community, women are appreciated only twice in their lives: first, when it is time for them to get married, and second, when they give birth to a male heir.”

“Our laws are strong and just, but their implementation is nothing short of an embarrassment.”

The book is also a grim reminder of the dismal depraved depths that humanity can resort to – the apathy and the insensitivity that we humans are capable of exhibiting in situations of extreme crisis, even when someone desperately needs assistance. The recounting of the actual acid attack and its aftermath is a horrific reminder of the ruthless darkness that lurks within us humans, which if left unrestrained can raise its head for the flimsiest of reasons and strike its most brutal blow to hurt someone knowingly.

It raises some valid questions about the value of life, the consequences of someone else’s oversized ego, and the price that innocents will pay to appease the self-appointed upholders of patriarchy and tradition. (It also made me realize the extent of unbridled rage an empathetic and overly sensitive reader like me could possibly feel. I was literally shaking in horror and anger at the appalling behaviour of healthcare professionals.)

Some lines from that one chapter are seared into my heart.

“My heart bleeds for them because I too was once like a wild, stray dog, howling for help that fell on disgusting, apathetic, wilfully deaf ears.”

“Humanity had ceased to exist.”

“My agony had become a source of gossip.”

“Water dilutes acid. No doctor or nurse made this suggestion.”

“My eyes had swollen shut, my face was blistering with boils, and here was a police officer asking why I, the victim, wasn’t answering his questions.”

While the most tragic incident in Reshma’s life gripped my heart with rage and grief, and the heartlessness of doctors and nurses infuriated me, both of these weren’t what made me most emotional. Surprisingly, it was the instances of kindness from strangers that teared me up.

The clothes shop owner, the politician Gautam Sharma, the big burly police officer in New York are proof that goodness exists in the world. Each of these incidents restored my faith in humanity, and I’m sure, Reshma’s too.

I tell everyone my story because it makes a difference…

The book isn’t just Reshma’s story told in her own words. It’s also a powerful reminder – an appeal – to people to look beyond the physicality of a person, to go beyond the stereotypes. And this is reinforced in these words – “an acid attack in itself is vicious, but what what follows is a toxic barrage of stereotypes, pity, and discrimination.” The biggest takeaway among many others from this book is the need to treat people like human beings, not chattel, objects, or mannequins.

It was painful to read how people raise doubts and ask questions like ‘What’s the point?’ But as Reshma says, ‘I tell everyone my story because it makes a difference, and I intend to keep making a difference. I hope you will too.’

We already know how Reshma’s story panned out (she is the world’s first acid attack survivor to have walked the ramp at New York Fashion Week), and yet, to read it in her own words is something else. It was also heartening to read the initiatives of the hotel industry in making these women a part of the mainstream society.

It was also heartening to see many of my personal beliefs reiterated in the book. I truly believe one should strive to be the best version of oneself and slowly the world will begin to change.

My earlier interaction with the acid attack survivors and now this book is proof that these women are more beautiful than the rest of us ‘normal’ women are. Their hearts are filled with a resolve to make the best of their circumstances, and yet, they do not shy away from using their example to bring about a positive change in society.

This urgent appeal from Reshma resonated with me strongly and will always inspire and spur me on.

“Change is slow, gradual. You can be a part of it in your own small way. Donate if you can, a rupee a month if that’s all you have, volunteer your time, and, most importantly, spread the word. Be the best version of yourself and the world, I believe, will be a better place.”