Women- The Saints Of Honour

A poem that tells how women have been taking the blame and suffering owing to the patriarchal society. 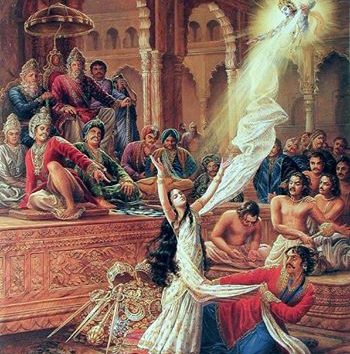 A poem that tells how women have been taking the blame and suffering owing to the patriarchal society.

they grab her in the blanket of night.

As the day dawns, shining bright,

they become the saints of honour.

Stones and abuses are hurled at her,

The cursed one, the sinner they call,

for their sin, she had to take the blame.

Rishi Kanva was cheated by Indra,

It was his mistake that out he went.

It was Ahalya  who was victimized,

both by Indra and the Rishi.

But, it was she who was punished,

Cursed to a stone for years,

For their sin, she had to take the blame.

It was the grave error of Pandavas

To place Draupadi to gamble,

As her own shameless men folk

Victimized was only she for their fault.

She who was stripped in public,

For their sin,  she had to take the blame.

It was Rama’s mistake

To run behind a deceitful deer.

It was poor Sita who was forced to suffer

Still forced to walk through fire.

For their error, she had to take the blame.

From ancient days, till today

It is men’s right to sin and gloat.

No limit to their heinous crimes.

Generation may change but for her,

Only to be possessed, tortured,

In the eternal law of man’s world.

For their sin, still she had to take the blame.

Register at Women's Web to get our weekly mailer and never miss out on our events, contests & best reads! Or - get a couple of really cool reads on your phone every day - click here to join our Telegram channel.
poetry