A bride is expected to suddenly grow up and take care of her husband and in laws immediately on getting married, even if they don't accept her as one of their own. Is this fair?

A bride is expected to suddenly grow up and take care of her husband and in laws immediately on getting married, even if they don’t accept her as one of their own. Is this fair?

The seed that we sow today will takes its time to become a mighty tree that can provide for both shelter and hunger. But when it comes to matrimony, people believe that a pinch of vermillion and seven circumambulations (saat phere) around a sacred fire can double bride’s age.

It’s strange that within the few hours of the ceremony a bride is required to immediately attain the maturity of a 50 yrs old woman to meet the expectations of her new family. It reminds me of a famous dialog from a Bollywood movie ‘ek chutki sindur ki keemat tum kya jano Ramesh babu?’

The moment a daughter leaves her parent’s house, she no longer remains her papa’s princess. She is now supposed to take care of everything in the same manner her MIL (Mother in law) did.

Such was the fate of Riya. Her happiness knew no bounds that day, when after three years of struggle and a decade old relationship, she was finally getting married to her college sweetheart. Little did she know that the sacred fire of her marriage ceremony was going to gulp the dreams she was living with open eyes.

Riya was very confident that she would be able to adapt to her new family and their ways in no time. She knew she cooked well, and was able to do all household chores proficiently. Moreover she had heard so much about her new family through her husband that she felt she almost knew them personally. In fact she was having lovely telephonic conversations with her in laws regularly since the past 2 years.

But relationships are tricky

But reality was totally different. The day she became a part of her new family, it became clear to her that she didn’t know them at all. Here don’t be in haste, dear reader, to jump to any conclusions, for she was neither tortured nor scolded. The only thing that hurt her was, they never accepted her as their daughter. Maybe Riya was expecting too much.

Relationships over phones appear much easier and sweeter than they actually are. Life would have been a cake walk if things turned out as nice as they appear on Facebook and WhatsApp. But reality is harsh.

You enter a house which was supposed to be yours, as a girl in our society is mentally conditioned to believe that one day she is to be married to someone whose family and home will be her own. Then reality strikes, and you find out that both your hands are empty now. You now neither belong to your maternal home as they have raised you as “paraya dhan” which they got rid of either lovingly or otherwise and nor to your in laws house as you were never their  own. Someone had once said to me “a son is a son, a daughter is a daughter, and daughter in law will be a daughter in law, she can never becomes ours as her love and empathy will always be for her own family.”

Abuse doesn’t have to be overt

Reader I would like to reiterate here that Riya was never ‘abused’ in her new family in the traditional sense. They didn’t even talk to her in a raised voice, but they never accepted her as well. Whenever Riya tried to tell her husband about her MIL’s behaviour he refused to believe her, saying, “you don’t know her well, she has a heart of gold.”

About gold, Riya was not sure, but her heart was surely crystal clear as whatever was in her heart could be clearly seen on her face. She could see the disappointment and disapproval on her MIL’s face every now and then. Sometimes it was almost as if it was engraved on her forehead: “Alas! My son is doomed, I would have searched for a better wife for him if he had listened to me once”. Riya was unsure whether her husband had turned a deaf ear to his mother as well, because he never said a word to any of them and remained the apple of their eyes.

Sharing 1 child between them – Riya’s husband

Its been 12 years now, both Riya and her MIL stands on equal footing. They both have three children, one being shared by both of them.

Riya has lost interest in trying to impress her MIL, but she made sure that she is living comfortably with them as it was her home also. Her MIL on the other hand is somehow settled with her disappointments as there is no hope of her son’s revival now. Both of them have understood one thing, that they are equally important to one person they both are madly in love with. They say all is well that ends well and the end is not so near yet. Though they all have learned to live in perfect harmony.

RIYA lived a happy married life but there was a void in her heart. She missed being the daughter she once was. Such is the fate of all of us. We all are living happy married lives, but at the same time we all feel forlorn in a house full of people who some say are our own, and some say that we can never be theirs.

I would like to ask a simple question to my readers. Is it not unfair to bring home someone’s daughter and never accept her as your own? Is it not unfair that a girl you are not accepting is expected to leave no stone unturned to ensure the comfort of family members who never consider her to be their own?

Image source: a still from the movie Om Shanti Om 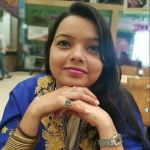