Our Story Of Working Together To Create Escape Velocity, An Anthology By 13 Women Writers

Escape Velocity: Not all that spins away is lost, not all that comes home is familiar, is an anthology that has come together after months of work by a group of writers, a great example of how a sisterhood works.

Escape Velocity: Not all that spins away is lost, not all that comes home is familiar, is an anthology that has come together after months of work by a group of writers, a great example of how a sisterhood works.

Seeing one’s work published is a dream for every writer. And when a group of women join hands to create something in collaboration, magic happens. As one of the contributing writers to the anthology ‘Escape Velocity’, that’s exactly how I would summarize the inception and publishing of our book.

The anthology has been conceptualized and curated by the extremely talented Kiranjeet Chaturvedi (Founder of Write & Beyond, a writing support group based out of Gurugram), and was developed over a series of workshops this year.

Each of the thirteen short stories in the collection is written in an authentic and original voice and carries personal perspective. These are tales about people like you and me, told with warmth and raw vulnerability. They are sometimes intricately woven, sometimes simply narrated stories, of life’s many paradoxes which sometimes find happy resolutions, and sometimes can’t be gotten rid of.

Reminiscing about the inception of the book, and the learning curve of several months, here I share with you the journey which finally got the book in our hands and into this world.

It all started in March this year, but…

It had always been there, I would say. That desire to see our work go out of the safe ecosystem of writing workshops. But it was sometime in March this year when we decided to take the plunge to do what we had only spoken lightly about, a few times before. I still very well remember that pleasantly warm and sunny morning when twenty writers sat discussing various ideas, books and writings in an open cafe amidst nature in the increasingly concrete jungle of Gurugram.

The group was diverse not just in their writing experiences, but also in their professional backgrounds. A few of us were published writers, a few others were at various stages in their blogging trajectories, and some others practised writing but hadn’t made any of it public yet. What was common to everyone was a passion for writing, and a dream of having something to showcase and hold their work; to create something tangible that would stay with them; something which could be shared with the world outside the Write & Beyond sessions as well. 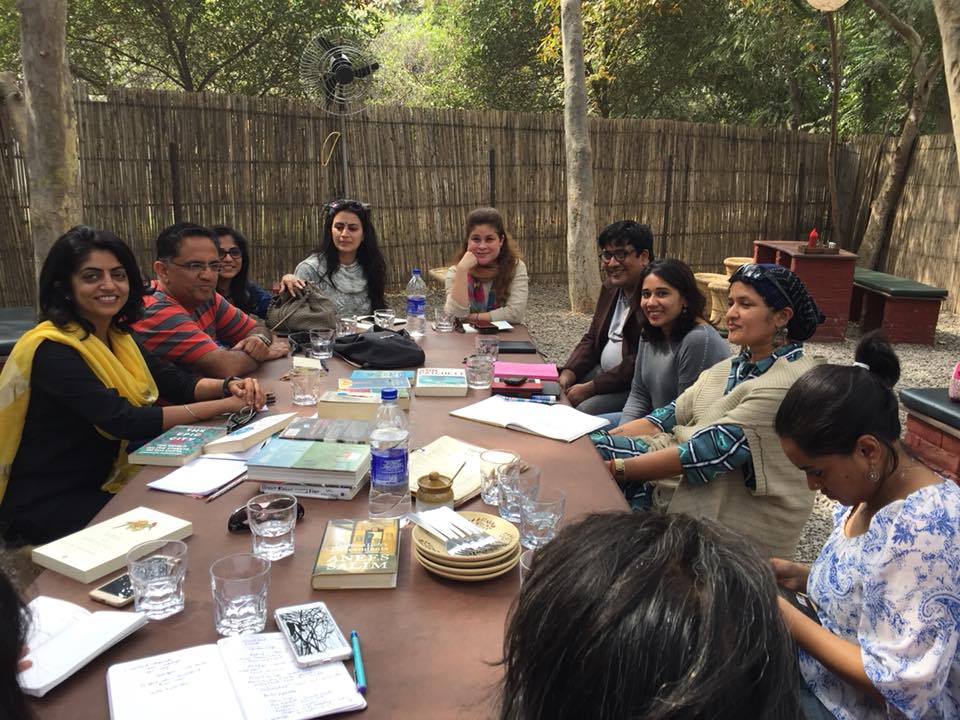 Fiction, non-fiction, poetry and graphic novels – we discussed various books from a carefully curated list. We reflected on themes close to our hearts. We were free to go forward and write without any restriction of theme, prompts, or even a word-count, for a start. We broke into groups and brainstormed some more. We dispersed that afternoon with the promise to submit our first drafts within a month.

From ideas to a common theme and then naming our baby

From the initial bunch of twenty who had shown interest in the idea of making a book, thirteen stayed the course. There were intensive readings to cover, “reading like a writer” discussions, and sharing of our fledgeling stories as they were shaping up with others in the group.

In the months after first draft submission there followed more collective and individual reviews, and multiple revisions. Though we all had professional expertise in different domains when it came to this project, we were like a class of new students who were mostly happy to follow the rules, but somehow managed to play truant. Which of course made for some interesting dealings with the project leader. The path wasn’t all smooth, but it was indeed extremely enriching. At each level, we could feel our thought process and writing process morphing beyond where we had started.

Gradually, our themes started to get more and more crystallized; the stories crisper and clearer. A thread started to emerge which was common to all the stories – the various paradoxes of our lives. Paradoxes which we sometimes resolve and other times remain stuck in, even when we long to break out. From this common thread emerged the name of our book. The name then led to the designing of the cover to graphically depict the essence of the name. 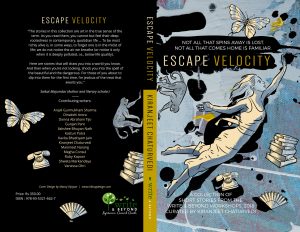 After many rounds of ideation, the cover of Escape Velocity was finalised.

Around June this year, we sent our work for an external review to acclaimed authors and literary scholars, Saikat Majumdar and Devapriya Roy, who have supported Write & Beyond’s various courses and workshops through the years, and who were privy to the idea of the book while it was still just an idea.

Devapriya Roy (Indira {Context, 2018}, The Heat and Dust Project {Harper Collins India, 2015}) has in the past worked closely with many of the writers whose work features in this anthology, at various Write & Beyond courses.

Saikat Majumdar (College -Pathways of Possibility {Bloomsbury, 2018}, Firebird {Hachette India, 2015} a professor at Ashoka University, has also interacted with a few of the writers in this anthology and been familiar with their work since some time. Their support and inputs on our work have helped and taught us a lot. The feedback we received from them was honest and candid, and a reality check! We realised there was a gamut of dimensions which needed more attention – finer nuances of plot lines, character motivations, pace, language.

It was again time to get one’s head down and re-work!

The equally important elements of Self-Publishing

The story of the journey of birthing our anthology would remain incomplete without making a mention of the final stages, post incorporation of all reviews and comments. So while we thought the job was almost done, it wasn’t. In fact, getting the stories and the cover in place was only two-thirds the work done. And the rest one-third was something we didn’t have any clue about. It seemed like an eternal job; like a program stuck in an infinite loop. Formatting, Editing, Reviewing, Send to the printer– loopback. 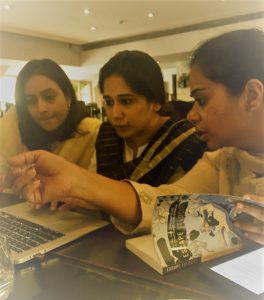 Understanding what it takes to bring out Kindle version

I will always remember those seemingly unending days when groups of us took turns to sit together through hours and multiple rounds of copy-editing, in order to get the manuscript ready for the printer.

That bond of sisterhood and empowering each other

Personally and professionally, I have always believed in the power of communities and working as a team. Escape Velocity is a perfect example of that camaraderie amongst women writers working together.

A kind of happy ecosystem was built on the belief that every story must be told, and that your writing improves when you not just read and write, but are open to feedback by your tribe. 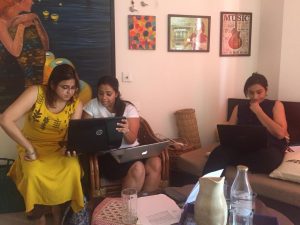 Team taking turns during the process of editing

It is said that a writer’s journey is a lonely one. Honestly, in these many months, I don’t think there has been a single moment when any one of us might have felt like that! This journey has been a truly collaborative, where we have not just supported, but complemented and empowered each other.

It is this power of sisterhood which has given life to a shared dream; mutual support and constructive criticism have been directed at enabling each of us to stretch, to give our best. This sisterhood at work is indeed the soul of the making of Escape Velocity.

As I look back

As I look back, I am reminded of these famous lines from my favourite book Alchemist by Paulo Coelho – “If you really want something, the entire universe conspires to bring it to you.” How perfectly those lines sum up the story of the making of our book. 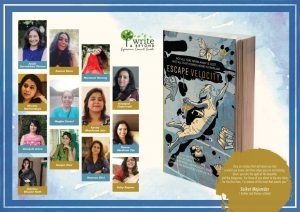 Escape Velocity was launched on October 21st 2018. I hope you will pick up and enjoy the tapestry we have woven from life’s many paradoxes that are all too familiar, and yet, unique in their particular unravelling. Do let us know what you think about the book.