A fan’s tribute to the superstar – Lalita Iyer’s Sridevi: A Queen of Hearts – is exactly what it sounds like, and should be read as much for the author’s razor sharp style, as for the iconic actor herself.

When I was asked whether I’d like to review Lalita Iyer’s Sridevi – Queen of Hearts, I agreed just because of one reason. No, it wasn’t because I was a Bollywood buff or a huge Sridevi fan, because fortunately or unfortunately, I’m neither. I wanted to read and review the book because of its author Lalita Iyer. I’ve read Iyer’s previous book and I follow her blog. Her writing appeals to me primarily because of its down to earth charm. Reading her is almost like sitting for a session of what we Bengalis call ‘adda’ with friends. No matter what she writes about, she manages to make it sound like an interesting anecdote and that’s why I feel that it is effortless reading her. Iyer delivers with her sharp yet simple style even in Sridevi.

She started the book with the disclaimer that she’d never met Sridevi, and this book was a fan’s tribute to the superstar.

“I told myself I was writing a fan’s tribute and about what I thought mattered. Sridevi made me believe that things don’t always have to add up – that you could be badass yet vulnerable; playful yet responsible; sexy, yet klutzy; quiet yet be able to summon the super strength of a goddess. That there is no one way to be a woman.”

The human behind the superstar

And herein lies the charm of the book. Iyer has shown the human behind the superstar, she has delved into the charisma of a woman who was not only the heartthrob of audiences from several film industries but who was also one of the greatest actors that Indian cinema has ever witnessed. Along with that, she also spoke about the child woman who had no time for a life of her own as she ran from one set to another from a tender age of four.

Iyer begins the first chapter with the friendship she shared with her mother which was significantly based on their common love for Sridevi. She then goes along to say how sad her mother felt when the actress needed to dumb down her true potentials that she displayed down South, in order to suit the standards of Bollywood. The way she weaved in the tender tale of a mother and daughter with the common bond of Sridevi movies is something that makes me want to read Iyer again and again. I think even if she writes a book on something dry like Bitcoins or Thermodynamics, she’d make it interesting somehow!

We move on to get the glimpses of the cherubic Sridevi who was pushed into the Tamil film industry by a mother who’d aspired to be an actor but couldn’t fulfil her own dreams. Soon, little Sridevi became popular playing the roles of Gods and babies and moved from Tamil to Telegu and Malayalam film industries.

With her mop of thick curls and huge eyes, Sridevi was the chosen one and even before she could realize it, she was forced into the roles meant for adult characters. She physically grew into a voluptuous woman even while her mind was that of a tender 10-year-old. She was even made to do sensual scenes at an age when she didn’t even have an idea about what romance meant. Some of the scenes were even exploitative in nature and yet, her mother seemed to have been okay with the child doing it, all in the name of fame and money.

Even if you’re a fan of the superstar, the book will make you stop and wonder, would you really want to trade places with a woman who seemed to have it all and yet seemed so lonely and have no life outside of her work?

The book then goes on to trace her journey as the Bollywood Superstar, her out of the world dance moves, her iconic fashion style, her unconscious support to the LGBT community, the way she needed to keep moulding herself to fit into the expected mould of a Hindi film heroine, the obedient child and then the obedient actress, her hiatus, her comeback and finally, her untimely demise.

There’s a section on body shaming which I’d particularly like to mention as it threw light on the way she had to get a nose job and shrink her hips to suit the Bollywood standards. How her 5’7’’ frame was ‘too big’ compared to the Sharmila Tagores and Dimple Kapadias in those days. How even as a 50-year-old she looked ‘perfect’ due to a strict diet regimen and numerous botox treatments. The author doesn’t blame Sridevi, rather she points fingers at the industry that is shamelessly ageist when it comes to its heroines, even as its heroes keep romancing successively younger heroines with every passing year.

A woman who was an enigma 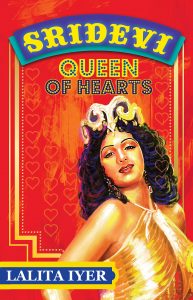 This book tries to explore the delicate and complex layers that went on to the making of a queen. As Iyer says, it’s a perspective of an admirer. Common people who looked up to her or even people who knew little about her (someone like me) will find so many gems and nuggets to treasure. This is not merely the story of a celebrity. This is the story of a woman who was an enigma and yet with whom you might find commonalities. You cannot help but sympathise with this woman who was so quiet and introvert in real life and yet, who kept performing relentlessly for three decades giving one hit after another, mesmerizing an entire nation with her beauty and her acting prowess.

As the author says, maybe English Vinglish was a fitting tribute to her real life. “…it looked like a role tailor-made for Sridevi-a woman’s struggle to fit in, her insecurity in not knowing a language that is considered cool…English Vinglish was also a sly wink with her own struggles with languages (till the end, she spoke Hindi and English with a Tamil accent) …”

This book has been a treat to read and it is nothing like a dry biography or one filled with mindless praises. This book is a nuanced exploration of Sridevi’s life written in a conversational style. It is a treat for anyone who wants to know more about the woman behind the superstar. This book will make you rethink about the price one pays for stardom. Along with that, it will give you a glimpse of a brilliantly talented but shy woman who will remain etched in our minds for years to come.

If you’d like to pick up Sridevi: Queen of Hearts by Lalita Iyer, use our affiliate links: at Flipkart, at Amazon India, and at Amazon US.

On Writing, Traveling And The Whole Shebang – Author Lalita Iyer Lets Us Into Her World