Female blackouts are happening around the world to show what the world might be like without women. But 'black' can be a racist word. Why not whiteout?

Female blackouts are happening around the world to show what the world might be like without women. But ‘black’ can be a racist word. Why not whiteout?

Women, white out your profile, don’t black it out – the same concept but less bias. A blackout implies there’s something wrong with black, and right now we have a white disease. So, #WhiteoutNotBlackout #BlackIsBeautiful #DarkIsBeautiful #NoMoreDarkIsBad #NoMoreBlackIsBad

If we want to stop being racist, we need to stop using ‘black’ and ‘dark’ as bad. No more ‘blackmail’ when extortion works as well (and is a homonym with ‘black male’ which shouldn’t be besmirched). No more ‘black market’ when you could say illegal commerce just as easily. No more ‘black sheep’ when renegade serves the same purpose. No more ‘the dark side,’ which is a cliché. No more ‘throw some shade.’ No more ‘find the dirt’ on someone. This is all bull guano (white shit, because if you are trying to convey the concept of ‘shit’ then white shit is a perfectly fine substitute.)

I am a language researcher. When I came to know that black or dark is equally bad in China, I began to wonder about the universality of linguistics.

Unconscious bias is rampant, and here’s a clear place where we could change perception just by changing the language. We did it with sexism. Secretaries are now ‘admins,’ chairmen are now ‘chairs.’ The visual spectrum does not confer morality, and we should stop making it do so. If we want to stem the number of dark-skinned people dying at the hands of authorities, we need to change our speech.

The consistent survival strategy of humans is that we evolve. Here are a good time and place to do it. #BlackIsBeautiful #DarkIsBeautiful #NoMoreDarkIsBad #NoMoreBlackIsBad 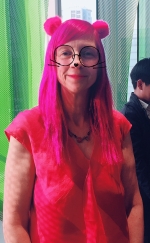 Jennifer has researched written language for more than nine years, read over 100 books, is in her eighth year of Mandarin, and has compared cuneiform, hieroglyphs, Maya glyphs, Chinese characters, and more—all ancient written read more...