When I was a kid, I have always heard the society telling girls to be as discreet and secretive regarding periods as possible, in fact to a point that many times even I was shushed by and told not to talk about it in public and to be less vocal about when talking about periods.

These are the few synonyms for the gift that mother nature has bestowed every girl with, yet the way we, as a society, have a perspective about it, makes me wonder that – Is it really a gift or a curse that mother nature has given the girls, to deal with it and to listen to the never ending negative rants of the society?

When I was a kid, I have always heard the society telling girls to be as discreet and secretive regarding periods as possible, in fact to a point that many times even I was shushed by and told not to talk about it in public and to be less vocal about when talking about periods.

But as I grew up into an adult and a bit more sensible than I was as a kid, I couldn’t fathom the fact that – why is it so hard for our society not to be scorn and disdainful about periods, instead of embracing it? As I become more mature, regarding things in life there are question that keeps swirling my mind regarding periods.

I realised that Periods are not actually Taboo, but it’s the hypothetical misleading facts in the society, which has actually made periods as a taboo.

A few months back, a movie Padman was released. And it clearly showed how society perceives periods. Both men and women think that having periods is a shame, an embarrasment. But how can it be a shame when that same period is the first indicator of femininity.

How we, even as women, can feel embarrassed about something which is part of our life’s, part of our body? Agreed that, it irks us, whenever we have periods, agreed that experience of periods is not very joyful. We have cramps, nausea etc, but disregarding periods, how is it justified in a women’s part.

Instead of talking and educating about it openly, why does our society keeps on turning a blind eye on the plight that many girls have go through?

Instead of telling them to not enter the kitchen or not to visit holy places, not to worship God, why don’t we educate them more about the precautions and the cautiousness one has to take during periods?

Why can’t we as a society, as a parent, as the elders, to whom the younger generation looks upon for everything, discuss the complications of menstural cycle, instead of telling young girls that it will pass in a day or two?

When I was young, I noticed many times that girls were scared to even talk about periods, even with their friends. Infact even now, many girls are either way too shy to talk about it or they they are way to discreet to talk about something natural and which is a part of them. Most of the girls feel disgusted and instead of embracing this part of them, they avoid talking about it.

Covering it up with black plastics:

I have never understood the concept of using plastics that too, ‘black‘, while buying pads and tampons, especially in asian countries? Like, the way most people will ask the shopkeeper or pharmacist to wrap it in a plastic. And not only in one, but into two. Or the way most people will whisper slowly to the shopkeeper about the pad packet, as if it’s the poison that are asking to buy. People buy a packet of condom openly, we don’t have any qualms about that, but why do we have to be secretive about buying a pad packet?

Yes we bleed! And we should be proud of it.

And there are the myths associated with periods. Myths that are never been proven scientifically. Myths that are never true, but yet we as a society, are glued to it, without any actual logic. Infact, some of them are so lame that even finding the logic in all these age old superstition is a head wrecking job. Here I will give you some example-

‘Periods mein nahana nhi chahiye.’- Really? Then what do you want us to do? Just to sit around in the house, smelling and bleeding for five to seven days, because you aren’t allowing us to take a bath? Excuse me! Taking a bath, is a right of every individual, you can’t shun us on what to do and what not to do.’

‘Periods mein dopahar mein sona nhi chahiye.’– What do you expect a person to do, who is suffering from stomach cramps? Is this society that heartless to not see a girl having pain, because are clinging themselves to the superstitious beliefs that the society has made.

‘Periods mein dusre logo ko haath nhi lagana chahiye-‘ Excuse me! For the society’s kind information, periods are not communicable! So shut up and stop treating girls as untouchables.

‘Periods mein pray nhi karna chahiye.’ – Okay society! please stop acting like you are the God. And stop telling girls what to do!!

‘Periods mein nahana nhi chahiye.’- Really? Then what do you want us to do? Just to sit around in the house, smelling and bleeding for five to seven days, because you aren’t allowing us to take a bath? Excuse me! Taking a bath, is a right of every individual, you can’t shun us on what to do and what not to do.’

In all the above examples that I have given. I couldn’t find a simple logic as to why these superstitious beliefs are made in the first place. And it’s not even about being superstitious, it’s about having irrelevant and baseless norms to be followed.

We are also humans. We are also living beings who have blood running down their body. So what if, we bleed once in a month? It’s natural, you are really kidding if you are treating this natural thing as impure. Let me tell you, because of this blood, your existence is confirmed. Because of this blood, every mother is confirmed to enter a bearing age.

Two days leave and the chaos:

A few days back the discussion about the two days leave, during periods had turned the nation to atleast talk about the taboo that has been unsaid and unspoken for years. It might have not been a serious discussion for many in the male patriarchy, but for the female world it created a hope, that finally the male dominated society it is actually talked about. That finally the plight every female has been going through is being considered.

But, just as the satisfaction came, so did the full force of taunts, mocks, and the never ending negative comments about the two day leave policy that was initiated by the government. Many questioned this policy while many questioned the need for this policy. While many embraced this policy, and for once female population was glad to know that in the male patriarchial society, there exists some men, who understands the plight and distress of what a woman goes through every month.

The social media feed has mixed reaction regarding this. While some of the males were kimd enough to support the women, many males, were showing lack of empathy to an extent that they questioned- why does female need this.

The malaise didn’t stop their it crossed the level where they( some men) have the audacity to say that the males should also get two days leave if the females are getting.

While to a step further, some shamelessly and unapologetically disregarded the plight a female goes through, during periods.

Can’t we, females, as humans take two days leave for the pain we undergo during those days? What is the big issue if we take two days leave? Is the societal or organisational work going to stop if females step down to take a rest from something that they have no control over?And I still didn’t understand the comparison between the leave of a woman undergoing periods and leave of a man who just wants to take it, well because the opposite sex is getting it.

And what made people think that females are weak, or they are physically not strong just because they bleed every month. How can the male fraternity judge females on the domain of the natural gift they have.

Yes, We bleed and that’s why we are much more stronger than any other species present on earth. Because no man has the strength enough to undergo the pain every month a female has and to bear with it and live a normal life.Because no man has the courage and strength to undergo the experience of torturous stomach cramps and nausea and to experience the phases of hormonal imbalance in their bodies.

And just because we bleed doesn’t mean, we are not strong enough to deal with pain. Pain becomes the natural part of a female’s life ever since she hits puberty. We deal with pain both physically and emotionally and yet we stand right in front of the male dominated society flashing a bright smile.

And the biggest evidence of our strength, is when a female conceives and bears that baby for nine months in her womb and gives birth to the child without letting that pain affect her.

So how is it justified of calling females weak?

Instead of being supportive why can’t our male patriarchal society, stop talking nonsense about periods.

They don’t know about periods. And they shouldn’t have any right to judge periods.

My request is, take periods as a serious discussion, like you do about any health issue. 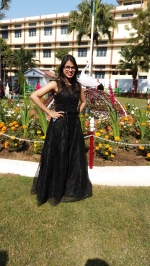 Astha is a journalist based in Bangalore, who writes about the developmental issues such as

Is It A Diaper, Mumma? Talk To Your Girls AND Boys About Periods