The Indian education system is seriously flawed as it doesn't include feminist life lessons like sex ed for example, that will help them navigate through real life.

The Indian education system is seriously flawed as it doesn’t include feminist life lessons like sex ed for example, that will help them navigate through real life.

Last week in my psychology lecture, my teacher was talking about the sociological aspects that cause women to have lesser self confidence in the field of work. It was the most basic thing that anyone who’s been involved in the feminist movement – like me – would’ve known. But to sit in a class, surrounded by people, and listening to a higher authority go on about how patriarchy still exists, and how there is an important need to systematically dismantle it, was just tea to my soul.

After really thinking about it, I realized why I was so liberated by it. This was one of the first times when someone I’ve known personally has talked in depth about gender and its dynamics. This was especially new to me, for I’ve had political science teachers talk about how the Indian government is partial towards women (in context of the women’s reservation bill), and English teachers who would quietly ask me to come meet them after the class, only so they could tell me to wear a longer skirt.

Both were furthering the pre-existing sexist norms we face everyday- one through knowledge, and the other personally.

This isn’t just an individual experience

Our Indian education system horribly lacks a curriculum that teaches students about gender, sex or women’s issues. Even when these topics come across, the teachers would either concord them into something completely different due to their personal biases, or would altogether skip it. I still remember how my eighth grade biology teacher never taught us about sexual reproduction.

Talking about gender or even women’s rights is a taboo, highly discouraged, even in classroom debates. The closest we’ve come to discussing these topics, was a two line definition of the word ‘feminist’.

Another aspect to this is the fact that until tenth grade, there is practically no book material that discusses the topics of gender. According to a World Bank report, less than 44% Indian students attend eleventh and twelfth grade. Out of these 44%, the only ones who get to learn about gender issues are the ones opting for humanities stream. This means that more than 80% of the students would’ve never learned anything about gender and sex. That is 80% too many, for a country whose statistics clearly show that in a few years, most of its citizens are going to be youth, from 25-30 years of age.

A lot of people question me about the needs of learning about these topics. I have often heard people talk about how feminism isn’t going to cure cancer, or create a building. So there is no need to teach students about it.

The need for sex ed

There are just two answers to it. Firstly, there are more things to life than the sciences and technology, and that is human dignity. Until students don’t learn about these issues, patriarchy would never exist to them, and they’ll continue to deny it while they unconsciously further it. We need a generation of active and learned citizens. And you don’t need to be a scientist to respect women, and acknowledge your privilege. Secondly, feminism isn’t just a social science. It’s meant to make people aware. An empowered girl, who isn’t bound by social norms, might just about find the cure to cancer.

The other problem is that unlike western countries, India has no sex-education for school kids. This is largely because of the huge stigma around contraceptives and safe sex in our country, but also because people overlook the fact that sex-education teaches about gender identities and sex too.

Even educated people are completely unwelcoming to the idea of talking about gender and women’s rights. As someone who’s been in this women’s empowerment and nonprofit sector for quite some time now, I know how quickly teachers and principals reject proposals of delivering gender based workshops to their students. In contrast, many educational institutes in western countries are welcoming of youth-led organizations that tackle these stigmas and stereotypes. This encourages the kids there to become leaders in their own sectors, for they are welcomed with loving hands, unlike India.

A flaw in our education system

But I would like to clarify that I am not blaming anyone here. The education system has had these shortcomings because of the structural conduct that has formed in our society. We will have to take a vast perspective here- Since India has been independent, it has been economically unstable. Because of this, a lot of the policies that have been formed for the past few decades were for the betterment of the poor, changes in laws, giving extra benefits to disadvantaged sections and preventing violence. This has shaped our mentality in a way that if some idea or policy isn’t outright benefitting the people, it is useless.

Let me clarify this with an example. If I ask you to chose between giving rural Rajasthani women better credit on loans, or changing the definition of marital rape, which one would you chose? There is a fair chance you will chose the first one. Even though both of the policies are excellent in their own ways, the second one doesn’t yield instantaneous and visible results. Albeit from the point of view of an expert, by just changing the definition of marital rape, we’ll be ensuring justice to thousands of women in the future in the framework of law.

So, when it comes to including gender and sex studies in the curriculum, the idea is disregarded due to the fact that people would not see any benefits of it. Even though I can confirm from my experience that active conversations on issues in the formative years of a child’s life drastically change their perspective of the world, the result is seen in a long time. But if we want our next generations to be compassionate and inclusive members of the society, we must start doing all we can to include these daily topics into a student’s daily life.

Image source: a still from the movie Hichki 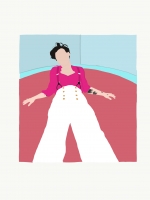