What I Learnt From A Young, Needy Mom When I Was A Carefree Woman

A mother reminisces about a lesson she imbibed from her domestic help a long ago, from her days as a carefree young adult just stepping into life.

“The view through each window will be different”, Saira says in the Malayalam movie ‘Bangalore days’. Is that so? My bedroom-windows always gave the same view. The windows that Amalu opened in the morning. Down there is the play-area. Then a house beyond that. Some trees in between.

We were four girls staying there. Just out of college. On our first job. A new phase of life. In a new city. Chennai. No more studies. Carefree days. New friends. New language. New malls and beaches.

This was our life, which one day Amalu walked into, asking if we needed a maid. A Tamil girl with mesmerizing eyes. A ‘Kannazhagi’*. Her hair looked uncombed. She wore frayed clothes. Younger than us. While we celebrated our lives she looked out for a job. We were so happy as we could get rid of the boring task of cleaning up the mess that we ourselves created. And she charged so little. Our only trouble was that she came early in the morning to disturb our sleep.

She always opened the windows before starting her chores. Every now and then she went to the window and peeped out.

We were curious. What fascinates her there? What is there other than the same old stuff? The same play-area and trees. A tiny tot played in the sand. I have seen this kid there many times before. She must be about four years old.

“Amma that is my kid”. Amalu was hardly twenty. We were surprised. Asked more about her. Until then we hadn’t.

“Amma, I lived in the outskirts of Chennai. I had got married at a very young age. My husband deserted me once the kid was born. There were times when I felt that everything was crumbling down. I badly longed for someone to ask me ‘Are you Ok?’ or ‘Do you need help?’ There were times when I needed a tight hug from someone who said, ‘I am with you’. There was no one. We were all alone. We have to get out of here. We have to survive. I decided. Because I had to. I came to this big city. Found job. Not one but many. I leave my kid in the play-area and go from house to house here. I have started to live. For my daughter”.

A wind blew and closed the window. She opened it again. She looked even more beautiful as the wind brushed through her hair. Kannazhagi’s eyes shined even brighter. I stood beside her and looked outside. The view seemed to be different today. Her kid smiled at me. I smiled back. The trees waved their branches.

Later. Much later. Years later. Life started taking  unexpected twists and turns. Darkness all around. Unclear view ahead. A window opened. She was there. My kid. She smiled. Her eyes shined. The glow that I have seen somewhere before. Yes Amalu, I will survive. For my daughter.

Author’s note: This had been published by Artoonsinn and had made it to list of ‘Featured writers’. A version was also published here. 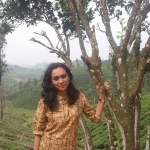 An HR Professional. A writer by passion.