TheaCare #Beautifulfillment recently carried out a survey to determine how women perceived their own bodies growing up, with the aim to promote a healthy body image among them. The results were not really surprising.

How many times have we been told that we are not good enough? Not pretty enough? Too fat, too thin, too fair, too dark, too short, too tall, always too much or too little of something. By newspapers, magazines, advertisements, movies, social media trolls.

Brands and businesses have tried to feed off our insecurities, by selling us the dream of becoming successful once we have fair skin or a slim figure. Little girls grow up thinking they need to look a certain way in order to be considered beautiful in the eyes of society, in order to deserve love and respect.

But the image of the fair, tall and slim girl shown to us that we are told we need to be like is hardly a realistic image or an achievable goal. So we grow up hating our own imperfections, feeling ashamed of our own body.

The survey was conducted on 550 women (all in the age group of 25-40), that included conversations with 7 women and personal narratives of 20 women living in major cities in India. The women surveyed consisted of survivors of abuse, women who have undergone hysterectomies, women with chronic illnesses like PCOS, Endometriosis. The results were rather disturbing. It showed that in women, body-image issues ran way deeper than what we imagined.

The real culprits for body issues

Friends, Family, sexual and romantic partners can make women feel much more insecure about their bodies than all of media, medical practitioners and strangers combined. 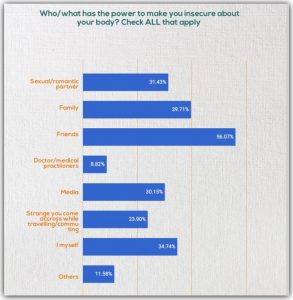 Women are taught that their worth in the eyes of society depends on how they look and how they dress. From a very young age it is a woman’s family that passes on these ideas and fears in her, putting on her the pressure to be a certain kind of “perfect” in her appearance, that helps her gain approval and validation from the larger society. Which in one sense is hypocritical because when women are harassed or assaulted, it is blamed on their beauty and “beautiful women” are advised to cover themselves up in order to not attract attention from people.

Love the kid for who they are, how they are

Kids look up to their families for support and strength. Families that give this necessary support to their kids raise individuals who are confident and secure in their ideas of themselves but when someone from this close circle of people whom one trusts and considers their own criticizes or points out flaws in an individual it leads to a deep sense of shame and insecurity. 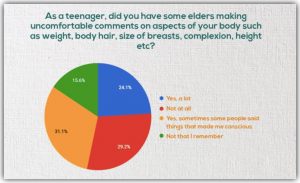 I was a chubby kid. I was fat shamed and bullied by my friends. My own family members did not shy away from pointing out how unattractive I looked because of my weight, suggesting my mother to feed me less or make me exercise more so that I become thin. I grew up with a strong sense of insecurity about my body. I started wearing baggy clothes that would hide my figure. I remember one incident very clearly when I was at a friend’s birthday party and her older sister was serving us cakes. I tried to take a bigger slice which invited a remark, “How much will you eat? No doubt you are so fat”. I was 9 years old then. I stopped eating much at social gathering always being conscious of the eyes on me.

Body shaming is a widespread problem not only in India but all around the world and the burden of this falls more heavily on the shoulders of women than on men. 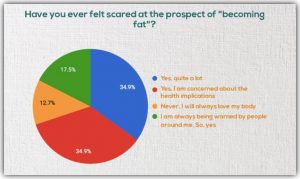 The requirements are specific. Being fat is synonymous to being ugly and thus women fear gaining weight for it might make them look unattractive. 87% of women have felt scared at the prospect of becoming fat and only one-third of them have attributed the fear to health reasons.

Shamed for their ‘natural’ body

Women have been encouraged to be ashamed of the natural aspects of their body like body hair, vaginal discharges, and changes during pregnancy and have been taught to consider them gross or unhygienic. 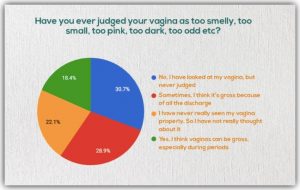 Television, movies, social media have been responsible for spreading forth these notions, putting up the “ideal female body” as one without body hair, sweat, smell or any such imperfections. 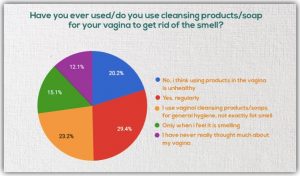 Companies have capitalized by feeding these insecurities to women, selling them wax kits, razors, scented soaps, oils etc. The image of the ideal or desirable female body has become so widespread, widely accepted and normalized that any body differing from it now seems ugly and absurd. The reason for this is deeply patriarchal because body hair goes directly against the idea of “ideal femininity”, and a woman with body hair is termed “masculine” and thus shamed for not fitting in to society’s idea of what a woman should be like. 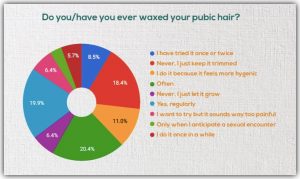 Nearly 70% women wax /remove body hair regularly. 85.9% women have waxed their pubic hair at least once in their life. 44.5% women use cleansing products for their vagina to get rid of the smell.

The first time I got my legs waxed, I was in class 11. It was extremely painful and I got red marks or cuts in some places from where the hair had been ripped off. Slowly as I started wearing different kinds of clothes, I realized the body parts that were exposed while wearing a particular dress were supposed to be shaved or waxed. Friends pointed it out, family members reminded me. Body hair that till few years back seemed perfectly normal now looked ugly, filthy and unhygienic. I did not look “feminine enough” with my natural body and that was unacceptable.

Shame associated to aspects of the body

Women are never encouraged to talk about their bodies and the natural aspects of it.

71% women in the survey revealed they were not encouraged as teenagers to talk about their bodies and address their doubts regarding the various changes taking place it in. 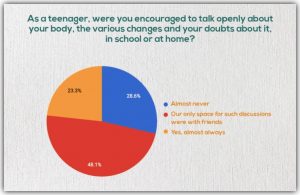 A woman’s private parts just like herself are to be kept under covers and not talked about openly. The guilt and sense of shame is so deep-rooted that women are unaware of their own body and are scared of even exploring themselves. 1 out of 5 women have never seen their vaginas properly. 28.9% women feel that their vaginas are gross because of discharges which are just a natural part of a normal functioning female body. 18.4% women feel vaginas can be gross especially during periods.

Social media has become an indispensible part of our lives, and plays a significantly large role in how we perceive our bodies.

Instagram, facebook is filled with photos of beautiful and “perfect looking women” and in most cases these images are fake and photoshopped. And putting up these false images in front of people’s eyes makes them compare themselves unfavorably to these Instagram models.

This leads to a deep sense of dissatisfaction and distress especially in teenagers and young adults.

Another factor is the validation that people seek on social media. The number of likes a girl receives on her photos comes to determine her popularity and women are constantly seeking positive responses and praises on these sites for which they are willing to even alter their appearances using shape wear, makeup etc. On social media they pretend to have a life more glamorous and the disparity between the perfect self they pretend to be and the less-than-perfect being they are causes greater distress. 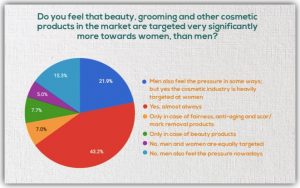 Women are told they need to be flawless even when that flawlessness is wildly implausible. Real female bodies are a taboo.

Television shows and movies also always employ actresses who are exceptionally good-looking, setting up idealized images for women, upholding unrealistic and unachievable standards of beauty, creating a sense of fear and worthlessness which is manipulated and exploited by companies to sell them products.

80% women acknowledge that grooming, beauty and cosmetic products are targeted more towards women than men. Provided the financial means 52% women will not mind thinking about cosmetic surgery due to various reasons.

For decades women have been taught to feel ashamed or embarrassed of themselves, feel uncomfortable in their own skin. Told that they are not good enough.

What will happen if one fine day women decide that they love themselves just the way they are?

What will happen if one fine day women decide that they will accept themselves and do nothing to alter their appearance?

How many companies will start running in loss?

How different will the world be if society did away with its specific codes of beauty?

What will happen if women are no longer put under the pressure to be aesthetically pleasing to the male gaze all the time?

What will happen if we told our daughters, their appearance doesn’t determine their worth?

The world will be a very different place. But this is still a dream. The first step we can take towards this is by loving ourselves and encouraging people around us to do so too. Small steps bring big changes.

It took me several years to come to terms with all this. The remarks, criticisms never stopped, not even from my own family. Once one problem was solved another arose. Once I lost weight to the point that I got physically weak and sick, someone pointed out the dark circles under my eyes. New reasons why I wasn’t attractive enough.

It was my mother’s constant support that got me through my worst phase. I got into a college where the people were very different. I made friends who made me feel beautiful, made me feel happy. I spent time loving myself and taking care of my health. My insecurities have not left me yet but I am on my way towards getting better. Becoming more confident and self assured and I hope my story helps you do that too.

Dia Mirza Says She Was Told She’s ‘Too Pretty To Be A Model’ Umm… What?!