Hannah Gadsby’s Nanette Strikes Close, As We All Are ‘Broken Women’ Inside

Watch Nanette. Hannah Gadsby makes you uncomfortable with her words, but also makes you laugh and makes you recognise the truths she speaks about.

Netflix special ‘Nanette’ by Australian standup comedienne Hannah Gadsby has been gathering a lot of attention since its debut online in June 2018. It is making headlines and garnering appreciation from people from all walks of life for the discomfort caused from watching it.

And Hannah Gadsby does make you laugh, even when she goes about her act, educating and priming you during parts for harsh revelations, known but oft neglected truths, and hope. She is a brilliant story teller, with a knack for creating tension and diffusing it effortlessly, all the while making you feel more and more uncomfortable as you enter her world of experiences and gain comprehension.

Hannah Gadsby’s content, while based on her personal experiences growing up as a lesbian, raised in a bible belt of Tasmania is just as relevant and identifiable for heterosexual women and the LGBTQI community of India. She talks about being closeted, about the ‘shame’ of knowing she was not heterosexual, and the fear and the impact that this has had on her psyche.

How many of us have our own personal stories of experiencing and living with ‘shame’ in similar or adjacent context? She talks about the importance of societal and family acceptance. We need this more than ever in the Indian family, the nucleus of Indian society, particularly towards young children and people who are still exploring and navigating through their own personal discoveries.

She calls out patriarchy, misogyny, and male privilege, of how we as a collective society are more than willing to sweep under the carpet a man’s misdoings just so that his reputation is maintained, but are more than ready to throw a woman under the bus and hold her responsible.

Hannah’s experience cutting over violence against women, particularly assault with bystanders watching, and her own rape, are subjects that hit very close to home. ‘If I’m the only woman in a room full of men, I’m very afraid’ is a statement that all Indian women can relate to.

One would think Hannah Gadsby is an angry lesbian standup comedienne. She isn’t. She tells her story to give us insight into the other side, one which we often don’t make the effort to understand. She wills you not to be angry, to channel that discomfort towards being accountable. To take ownership for all times you’ve turned a blind eye or criticized something or someone that was different from your own sensibilities.

Throughout the show, Hannah is fierce, funny, cheeky yet vulnerable. As a self-deprecating comic, she talks about how mentally damaging it can be to humiliate oneself to make others laugh. ‘It is not humility’ she says, ‘but humiliation’. And continual humiliation can reinforce one’s own beliefs about themselves. That is an epiphany that will hit you straight in the gut. Many of us will struggle to accept and come to terms with it because how many times have we convinced ourselves, and reinforced to others, that we were just not good enough?

She reiterates her decision to leave comedy so that she can rewrite her story and come back anew. Because as Hannah Gadsby concludes powerfully- ‘There is nothing stronger than a broken woman who has rebuilt herself.’

Although Hannah Gatsby’s states that ‘Nanette’ is her swansong from comedy, I believe we’ll be seeing much more of her. Watch ‘Nanette’ an impressive live performance on Netflix.

You won’t regret it. 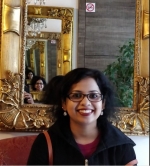 Marsha Lewis loves to watch shows with drama, bake bread, and attempts to maintain a

Sexism Making You Feel Low? These Quotes From Comedy Show Nanette Are A Cure!