Games And The Sacred War: Echoes Of The Mahabharata?

The new Netflix series Sacred Games, builds in an interesting juxtaposition of characters and lesser known stories from the Mahabharata. This is something to be looked at more closely.

As the new Netflix series, Sacred Games draws people into its hypnosis, one would do well to scratch beneath the layers and distill the essence. The series is based on the best selling novel by Vikram Chandra, who sets the narrative in the Bombay of the early eighties, drawing parallels with the events that defined some of the most turbulent post independence years; intersecting but never mimicking the Bombay of Shantaram.

I, though, am on a different tangent. Look beyond the dope cloud and you see the interesting juxtaposition of characters from the Mahabharata: this thread should not be missed out in Sacred Games. Why is it important to delve into this juxtaposition? Well for ascertaining that we reach the right conclusion, we need to ask another question. What is the role of philosophy and mythology in how a generation visualizes itself?

That eastern philosophy, in particular the Indian philosophy that is looked upon by the world as something lofty, is essentially free of religion and dogmas. Religious philosophy never has and never will sustain the fires of time. Since a not very long time, the reinterpretations of the War of the Mahabharata and the dilemmas of its major and minor characters have filled our book shelves. Draupadi for instance has emerged once again from her Yajna Kund and has captivated the feminist mind. She has been resurrected and her view of the great war has gained currency.

The young, restless and the educated want to relate themselves to those parts of these texts, that can be categorised as liberal and primarily do the job of illuminating the human condition. In angst and ecstasy alike.

It is this desire that is fed upon by injecting references of epics like Mahabharata in the contemporary Indian Novel. I would call it a good business model in the realm of entertainment without alluding to any incidental morality therein. The upsurge in the romance and fascination with the mythological resonances is slowly but steadily laying the ground for a cinematic renaissance in India.

The kaleidoscope of creativity is turning and throwing up interesting patterns. In this instance, I am Sanjaya. I see the War getting ever more layered, just like the plot that thickens. 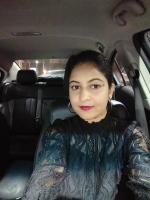 An avid reader of contemporary fiction and non-fiction. Deeply passionate about creative writing