12 Ways My Joint Family Was Sexist To Me

A 16 year old writes about various sexist instances in her everyday life that normalise patriarchy and discriminate because she is a girl.

Last year, my mum told me that when mum was pregnant with me (a girl), my Nani wished that my parents be blessed with a baby boy. So that my brother and I could be a perfect pair. You can imagine how she must have felt when I was born a girl.

~ I remember that in my early childhood, my brother and I were given different kinds of toys. I was given dolls to play with. And my brother was given cars, trains and trucks. Whenever he tried playing with my toys, he was told that these are for girls, and that he must man up and play with the rough and tough boy toys.

~ In kindergarten, it was mandatory for girls to wear tunics and for boys to wear shorts. My friend, who was a boy, wanted to wear the tunics but he was scolded for thinking so.

~ When I was in 5th grade, I was told that it was now time for me to learn how to cook. I argued that my elder brother, who was in 8th grade, didn’t even know how to make Maggi.

This was first time my 10 year old self got a glimpse of the patriarchy that was, and still is ruining the future.

~ I was raised in a joint family. As time went on I started observing more of it. I saw how my mum was obliged to serve my father and never eat before he does. Whenever the whole family would sit together and some non-domestic topic would come up, and my mum, aunt or sister gave their opinion, they were told to keep quiet and go back to the kitchen. Even if they were joking, I still couldn’t get the hang of it.

~ In school, whenever the teachers needed some help with the heavy stuff, they would immediately call the boys, and I’d wonder why weren’t us girls being called.

~ An older male cousin brother likes to keep himself clean and well-groomed in general. So whenever he’d put on some face mask or cream, he was laughed at by his own mother and sister. I find that extremely weird and wrong.

~ In school, I was called boyish and a tomboy, just because I liked sports and I fought a lot. Back then, I started believing that liking physical activities and being loud made you more of a man, not more of an active person.

~ When my female friend arm wrestled with the strongest boy in class and won, it was seen as something extraordinary. And she was asked, “Bhen tu ladki hi hai na?!?” (Are you sure you have a girl?)

~ When I wore shorts just above the knees, someone close commented that I liked to show my body a lot. Imagine what a 16 year old Indian girl must have felt.

~ Whenever we’d go out, my brother could wear anything he want but I’d have to wear the specified clothes. And if we’d have to go to some function, I must wear makeup or I was called boring and weird.

~ When I yelled, I was told that girls should be quiet and calm. Your brothers can call you names, but you must not.

These are just a few of the thousands of ways in which people were sexist to me or the other girls in my family, throughout my 16 years. And mind you, I belong to the middle class family where my cousins are “educated”.

If a 16 year old can see the problem, then you adults can too. Don’t ignore it. Raise your voice. Use your power. 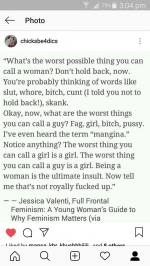 Blue Is For Boys And Pink For Girls: It’s Time We Get Over It