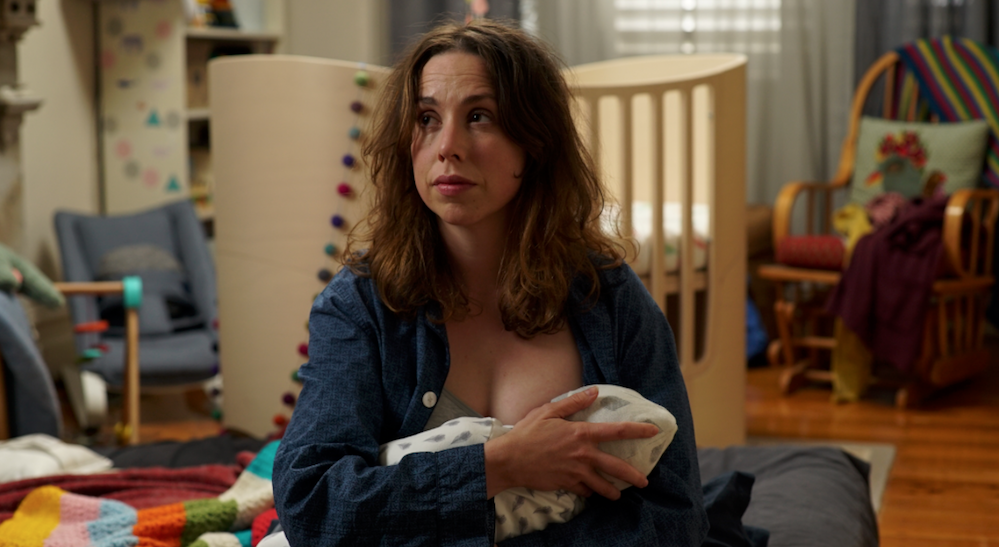 The Let Down: A Netflix Comedy That Captures The Unfunny In New Motherhood

The Let Down, which premiered on Netflix takes you on a roller coaster ride while capturing the woes of motherhood.

If you are a new mother and are browsing Netflix and hit upon the show called, The Let Down, you might think, “No, thanks, I know this story too well. Am I not going through it all now?” But this feeling will leave you as soon as  you spend as much as three minutes watching the dramedy. I promise you, you will binge-watch the episodes, even if you have to feed, change and put your baby to sleep.

This series sets the mood for comedy right from the first moment and carries it consistently through all the episodes. The comic timing is impeccable and none of the episodes lose the intensity ever. This Australian show is perfectly conceptualized and meticulously scripted. Alison Bell as Audrey is superb and her expressions are matchless.

Indian mothers may not experience motherhood woes in the same vein as Audrey does in the show, thanks to moms, moms-in-law and daayis who are there to help. Pregnancy, childbirth and postpartum in India is dotted by someone to cook for you, clean, massage the baby, bathe the baby, bathe you and so on. But, if you are an urbanite and like to take care of your baby on your own, then The Let Down is a must-watch. Many women today detest the interference of moms or in-laws; they are slowly moving towards the western model, wherein you rely on science to learn the laws of motherhood and not on other people. You also learn to use technology in your favour. Oh, the gadgets that are there at our disposal today! From a baby heart monitor for your peace of mind to the breast pump that is an absolute essential for working mothers, the list is unending. I just saw an ad for a new crib that moves gently and rocks your baby back to sleep while locking the baby in a specific position during sleep.

The woes of a new mom

The Let Down introduces, explains and takes you through the hard truths of motherhood when you are trying to independently bring up your baby, which is kind of the norm in the West. But even in India, if your MIL is uncooperative, your mother is toxic or god bless her, dead, you would end up quite like a new mother in the West who takes the help of others or support groups. There are various support groups today, for birthing, breast-feeding and so on. But being a new mom is so traumatic that the first few months especially, you wonder if you could actually drive yourself out to the support group without doing 25 different chores as  a prep for it.

Put your baby into the car or pram or hold or wake the baby, pack formula if you need to do that—all of which are good reasons for another unending bout of crying—the reason for which is mostly unknown. In fact, you will find that one of the most relaxing realizations in your motherhood journey is that babies at two months cry—for no reason at all—you may hold them, change them, feed them, but don’t expect the crying to stop. It need not.

One such realization for Audrey is that light creeping in during the night could harm the baby’s adjustment to a night time sleep routine. She fills the cracks in her windows after reading about it. She also realizes she has the ability to sleep for 3 seconds at a time! Sleeplessness in new parents cannot be commented upon enough which is indeed the starting point of The Let Down.

It is not that Audrey detests her baby for even half a second. She just cannot fathom when her friends, occasionally her husband and her mother fail to be understanding at times. Clearly, the world is divided into—those who are parents and those who are not. In fact, Audrey forgets all her troubles when she sees the sweet baby she holds in her arms. Is there anything more beautiful, really? Audrey’s troubles which could be springing out from postpartum depression is completely a result of her situation—being stuck at home, being stuck with the baby’s routines at all times without a break, friends not understanding her plight and so on. Though the show does not term her condition as depression, it seems so. Also it is evident that it can be cured with one simple thing—support from friends and family.

The series traces the life of her friends in her support group, each with a small story to tell and funniest is the man in the group who has quit his job to take care of the baby. At one point, he attends an interview for a job and cannot talk about anything other than his baby—this is so well done and true to life—it could take your breath away! Isn’t this why many women find it hard to get back to work—many don’t return at all!

The series is made memorable owing to many a scenes which are evocative to say the least. One such scene is where Audrey cries sitting in a bus with her baby, betrayed by her friends. In another scene she realizes that a brain pruning is occurring just then and she loses most of her words. We are going to be more intelligent, it will all come back but, for now we are only monosyllabic. New mothers cannot relate to this situation of horror any differently.

The show is real, funny and contemporary

The show is very contemporary – Audrey’s husband cannot change diapers in the men’s toilet–this patriarchal set-up (in the toilet that is) that assumes only women are care-takers of babies was changed by Obama in the USA only recently, other countries are yet to catch up. From the awkwardness experienced by others when new mothers feed babies in public and the importance of buying the right kind of pram—The Let Down touches on numerous new parenthood topics with the perfect amount of zest and quirk. It is laughs all the way, yes, but none that are cheap or silly. The title itself is derived from the moment when breast milk kind of rushes out—often an embarrassing  situation but nothing to be ashamed of. After all, breast milk saves the lives of children until they can consume solid food at month 4 or 6.

The effort of the makers is quite laudable mainly because it retains a simplicity that hides the hard work of capturing early motherhood realistically. Quick twists and plot turns that all remain truthful to all the traumas of early motherhood without an ounce of sugar-coating cannot have been necessarily easy—no matter how many anecdotes you came across. Add to this the fact that people forget the trauma of early parenthood too quickly because they still have little monsters at home who have progressed in devising ways to traumatize their parents!  The show never loses sight of the main issue of early parenthood even when it visits multiple sub-plots and dramatic asides.

This show could be a good learning exercise for many of us, pacifiers, car seats, cribs, strollers, better nanny services—get the lingo right first! It resonates with every mother/carer as it has very identifiable issues and is a quick watch. The truth is, nobody gets motherhood or parenthood all right, many only pretend to. No wonder the motherhood drama takes over at some point or another, which details all the sacrifices moms make, one by one over the next many years of the children growing up.But for this version of the drama, one could visit any household, any day, in India, of course. Perhaps, all of it is rooted in the early stages of the baby, who does not sleep like a baby yet. To add to it, the helplessness, lack of support as well as understanding from others makes it the worst time of one’s life.

The show has an intelligent protagonist and parents-to-be should get their notebooks out when watching The Let Down. But it is a wonderfully made comedy in its own right too. If you are a parent, you will love it, if you are not, you will love it. The very last episode ends perfectly when Audrey says about child care, “The monotony, the boredom and the cabin fever. Does something to your brain, OK? I mean eventually our brains get a lot bigger and more complex, but there is a transition period. We need caffeine, we need cafes, we definitely need, you know an escape into quality Danish drama and efficient broadband.”

India needs to watch this, Indian men especially so, so that instead of staring at pregnant women and being told off by MIL that this is ‘the women’s thing’, they could learn a thing or two about early motherhood/parenthood and kick the embarrassment out.

About the author:Sushumna Kannan has a PhD in Cultural Studies and works on topics in feminism and religion, postcolonial studies and South Asian history among others. She received the Bourse Mira fellowship by the French government in 2016 and 2017. She is currently Adjunct Faculty at San Diego State University. Visit www.sushumnakannan.weebly.com for more writings.

So Who Thinks That Being A Mother Is A Wonderful Thing? Let Me Break Your Bubble