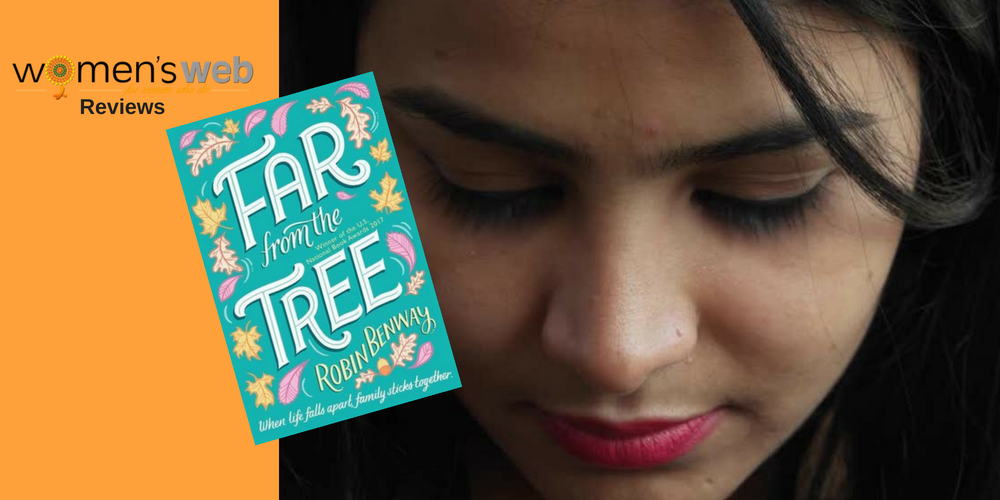 Far From The Tree by Robin Benway is a YA book that can start important conversations on adoption, fiction with children in the adoptive and foster care system at its centre.

As a teacher who has been given the responsibility to build my school’s library, I come upon myriad interesting books. This is about one such book I discovered.

This book came as a recommendation in my trawling, as I try and stock the library with diverse books for kids Grades 6 and up. This means, of course, that we read as many of the books as we can, right? Seriously, these are times when one parent’s levels of discomfort with what all kids that age know can make a book/a part of a book an issue that has Principals held up publicly, FB posts, vehement reviews. Got to be careful on several levels.

Far From The Tree has an adoption plot, and a good young adult book that really talks about adoption, identity and the search for biological roots is as rare as hen’s teeth. Despite the ‘orphan’ (hate that word!) theme being rampant in book plots, it is used to give the author all the room they need to make characters do what they want. Authoritative (not authoritarian) parents would have shut down many an adventure way before they even were glimmers in one’s imagination! Percy Jackson would have been taking the school bus home and back, with a packed lunch!

Speaking as an adoptive parent

Adoption comes with its nuances and research-proven core issues. The adoption community in India is very much in its infancy when it comes to thought – we don’t have many adoptee voices speaking out, the few groups that exist are for adoptive parents (those who think there’s something here to prepare for), birth mothers and fathers pretty much don’t even exist in our conversations. And yet these kids come from somewhere! Adoptive parent alert – I am one, and what I say is coming from almost 14 years worth of experience after some speaking up in public spaces and tons of adoptive parent preparation calls and workshops.

We are in protective mode always – if we say this, what will happen? Society stigma is very much a factor and we protect with good intentions…meaning little is said of consequence beyond feel-good ‘born from the heart’ stories. Adoption is like India – for everything that is rightfully held as true, the opposite is also true.

This book is a part of that picture. Joaquim, Maya and Grace (being biological half siblings) are three young adults who find each other, after Grace ends up placing her child in adoption as a teen. Her search for her birth mother leads her to Maya (not Indian in origin, this book is completely set in the US), her half sibling who lives 10 miles away from her. While both girls were adopted, Joaquim has spent his life in the foster care system. He is situated precariously – a lovely couple want to adopt him and yet…

Adoption should be just ‘one facet’ of life

Benway has done some serious work; I wonder how she could get in the heads of these characters. The challenge in adoption stories (for that authentic ring) is to place adoption as one facet of a person’s life (my little opinion) and she does that brilliantly. Family isn’t perfect – adoptive families don’t have to be held up to a higher parenting standard just because they adopted kids. No pedestals here – adoptive parents wanted kids, adopted. Parenting isn’t charity, nor is adoption ‘noble’. There’s alcoholism there in the book, and relationships breaking up, and other things happening.

How does one keep adoption from taking over the whole picture and yet giving it the importance it needs? Kids who are adopted deal with a whole range of making sense of areas all kids have to make sense of – identity, negotiating their worlds, finding their feet with peers, deciding on and planning for a future. The fact that they aren’t in families that they were born into (or with the people they were born to) is a thread that runs through their lives, influencing decisions, guiding choices…sometimes ‘good’ and at other times, not as ‘good’. Depending on the trending definition of ‘good’.

The author has several threads going in everyone’s lives: Maya is lesbian, with a girlfriend, was adopted, feels out of place at times in her family that had a biological child after her adoption, is dealing with her mom’s alcoholism and parents’ disintegrating marriage. Grace tries to go back to school a month after she places Baby Peach (her name for the fetus that stuck), dealing with peers calling her a slut, managing her emotions from missing her baby something fierce. Joaquim has to decide if he wants to be adopted by his current foster couple, deal with his demons layered on by his history with several foster homes, some good, some middling. Not hard-core abuse, but the damage done by the well-intentioned and ‘systems’ also needs some documenting!

It sounds overwhelming laid out like this but the author not only manages these threads deftly, but also treads lightly: real and complicated, like life. As it tends to be for everyone. Do read it and get the kids in your lives to read it. 14+ and with rich discussions after.

Adults will get a lot out of it and maybe, just maybe, with books like this, we could get onto discussing adoption without pathologizing it. Adoption is after all one way to make a family, nothing more but also nothing less.

If you’d like to pick up Far From The Tree by Robin Benway, use our affiliate links: at Flipkart, at Amazon India, and at Amazon US.